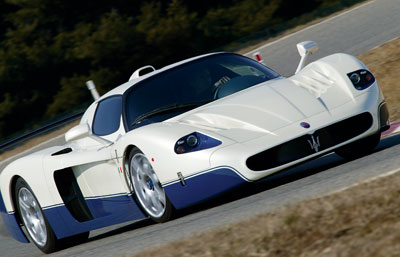 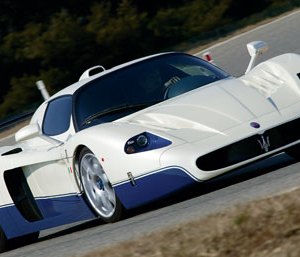 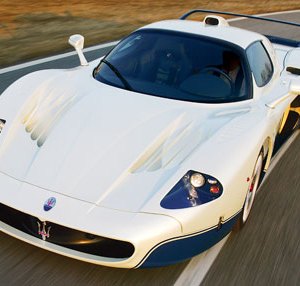 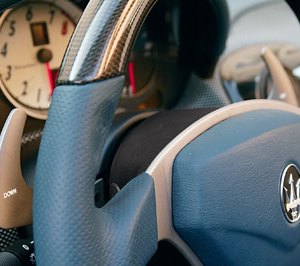 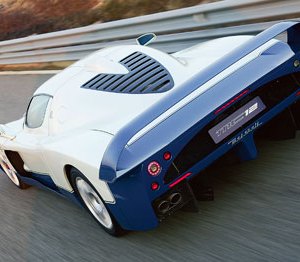 City streets, interstates, and showrooms abound with two-seaters masquerading as racecars built for the street. They are only perpetuating a myth, for tailpipes the size of toilets, a turbo or two, stiffer shocks, large and largely faux spoilers, and dabs of carbon fiber trim do not a racecar make. Even factory applications of F/1 technology to brakes, transmissions, and traction systems bring an Aston Martin no closer to a BMW Williams than to a dump truck. Porsches, Mazdas, BMWs, Corvettes, and Ferraris stripped and tweaked for club racing—even ultraquick Vipers and Lamborghinis competing in GT classes at Le Mans and Daytona—run insecure in the knowledge that they are street cars first and racecars second.

Maserati’s MC12 bears no such baggage. It was conceived, designed, engineered, and born to run far faster than 200 mph straight out of the box and to lead the field at world-class enduros, as it did at the end of the 2004 racing season. And if all goes according to Maserati’s plans, in June 2006 a pair of preened MC12s will compete at the 24 Heures du Mans.

The only differences between the MC12 street machine (versione stradale to its makers in Modena) and the MC12 racer (versione competizione) are the absence of decals, a softer spoiler, a grille with a smaller gape, and the paint job. Maserati’s MC12 track car is cobalt with white lettering and Trident signage, while the gentler—by only a hint and a whisker—autostrada model is alpine white with sapphire trim. Those colors subtly commemorate the livery of the Briggs Cunningham team—America Camoradi Scuderia—and its Birdcage Maseratis, the Tipo 60s and 61s that Stirling Moss and others campaigned so cleanly in the early 1960s.

Neither MC12 (for Maserati Corse 12-cylinder) comes with cup holders, electric seats, auxiliary power ports, air-conditioning, cruise control, radio, walnut trim, glove box, automatic transmission, or even a rearview mirror. Such niceties would betray the car’s purpose by adding clutter, which translates to drag and weight and a measurable loss of power on the road or track.

Both cars are long-tailed, mid-rear-engined, carbon fiber–bodied grand tourers powered by a 630 hp V-12 that the Maseratis’ parent, Ferrari, initially built for their automotive sibling, the Enzo supercar. Mated to a 6-speed, paddle-shifting Cambiocorsa gearbox—a chunk of F/1 technology that easily adapts to street use—the civilian power train delivers a zero-to-60-mph sprint of 3.8 seconds, a top speed of 205 mph, and cause for nervous passengers to hide under the dash. The final performance numbers for the MC12 track cars have yet to be established, but you can safely assume that they will reach even more fearsome levels.

Were it not for the complexities of international racing regulations, those with $1 million to spend on a single car might never have had the opportunity to enjoy the street-going MC12 and the enormously fast, flat, glued-down, perfectly braked, beautifully balanced, and brilliantly responsive performance of a pure sang racing machine. Before a manufacturer can compete in GT1 racing at national and international levels, it first must create a homologous species that satisfies the various sanctioning bodies of motorsports. This requires building a specified number of road cars that are identical to the racing prototype and meet the size, weight, and mechanical specifications established by each endorsing group. To run at Le Mans—the World Series, Super Bowl, and Kentucky Derby of sports car racing—Maserati had to produce 50 matching MC12s, which leaves about four dozen extra cars available for purchase by seekers of extraordinary, exhilarating, and marginally evil motoring.

Maserati’s involvement in motorsports began in 1926, when Alfieri Maserati wrestled a Tipo 26 to a class victory at Italy’s legendary Targa Florio. Over the next four decades, Maseratis, demonstrating the flexibility of the marque, brought a 1957 world driving championship to Juan Fangio; opened niches in motorsports history to Moss, Jean Behra, and Tazio Nuvolari; and logged an extraordinary total of 500 wins, including 23 road-racing championships, 32 Formula One grand prix victories, and a pair of first-place finishes in the Indianapolis 500.Yet because racing represents an expense that could retire the national debt of Zaire, Maserati pulled out of competition in 1967 to focus on production of fast and luxurious road cars: the first of the Quattroportes, the Mistrales, the Sebrings, and the Ghiblis. Then ownership shifted, fortunes fell, and Maserati devolved into little more than a badge with sentimental value and a failed reputation stored in an empty factory that Ferrari and Fiat acquired in a 1997 fire sale.

Maserati might have remained moribund but for Luca di Montezemolo, who was first the head of Ferrari, then boss of Ferrari-Maserati, and now chairman of Fiat-Ferrari-Maserati. Having restored the prestige, quality, and sales of Ferrari through its racing program, di Montezemolo revived the Maserati Racing Division and ordered the creation of the MC12. The division responded with immediate success: Two MC12s posted a pair of wins, three seconds, and a third in only four starts at the close of the 2004 racing season.

With styling by Giorgetto Giugiaro and Frank Stephenson, the designer also responsible for the BMW Mini Cooper and the Maserati Quattroporte, the MC12 cannot be mistaken for a street car. In fact, although this Italian stallion may be seen ripping up asphalt on the A14 from Pescara to Bologna, it is not even close to being street legal in the United States. Nevertheless, a half dozen have been purchased by American car collectors and amateur racers with access to MC12-friendly circuits.

“It was a designer’s dream to work on a car like this,” says Stephenson, noting that none of the lines he drew, intakes he positioned, or curves he crafted could interfere with the aerodynamic purity of the whole. “The road version and the competition version are pretty much the same car. The racecar is aerodynamically truer and has a sparser interior, but both engines breathe through a roof-mounted snorkel and neither has visibility to the rear. So the MC12 is not a car that you drive every day and park downtown. It’s more of an event.”

Because the MC12 borrows from the Enzo’s hardware, one might presume numerous overlaps between the designs of the two cars. But, Stephenson explains, the Enzo is a supercar that was not built to race, while the MC12 is a thoroughbred developed solely for GT competition. Unlike the Enzo, the MC12 comes with a detachable lid and “is a spyder and a coupe, also an easier driver than the Enzo,” says Stephenson. With a price of $650,000, the Enzo also costs less, but production has ceased, and all 399 have been sold. (A 400th Enzo, however, is being built and will be auctioned off to raise funds for victims of the tsunami that struck the Indian Ocean nations late last year.)

MC12s for both road and track are built with carbon fiber bodies and stress-bearing chassis of a composite and Nomex honeycomb. Hoods and front wheel arches are latched, one-piece, removable units. Each car weighs less than 3,000 pounds, which is lighter than a Honda Accord, a comparison worth noting because the MC12 is pushed by four times the horsepower of a base Accord. On both MC12s, the Brembo brakes are cross-drilled 15-inch discs grabbed by six-piston calipers. Only the street car is equipped with ABS and traction controls because race drivers prefer the seats of their pants to sensors and electronic guide dogs.

Because drivers accustomed to motoring in silk polos and Pilotis typically resist the naked-aluminum-and-fire-extinguisher interior motif, the MC12 stradale has a much cozier cabin, which is comfortable and elegant and yet remains reminiscent of a racecar. Some perforated leathers suggest luxury, but carbon fiber doorsills reflect the car’s true purpose. The dashboard may appear as though it were crafted from the same hard material, but it is actually made of a fabric that Stephenson found in a Milan fashion house and is otherwise used in ladies’ outerwear.

Despite Maserati engineers’ faith in the docility of their street racer, media drives of the MC12 were not across Firenze in the rush hour, but in Italy’s relatively desolate north, somewhere between Turin and Milan. The area, close to the Swiss border, is known for its textiles, furniture, and rice paddies. It also is the home of the Fiat Group’s Balocco test track.

The MC12 is not a car that glares, but it certainly looks very serious. The nose would not clear a toothpick, but the cockpit is equipped with a control that lifts the snout over any obstructions, such as a roll of euros. The squat is low; the car does not stand, but rather sprawls only 4 feet tall, with XXL overhangs front and rear. With a length of 17 feet, a width of 7 feet, and a wheelbase of 9 feet, the MC12 has dimensions that exceed those of a Corvette by many inches in almost any direction.

Entering the car, buckling up, snuggling down, and noticing more than enough room between helmet and headliner is a thoroughly civilized experience. Absent are the typical GT cramping and scrunching and flashes of claustrophobia. Instead, the cockpit offers a comfort level characteristic of an Aston Martin.

Adjust the right paddle to find first, stomp on the gas pedal, exit the short pit lane, and then hang on as 630 horses are let out of the barn and the car rockets from a canter to a full-blown stampede before you can count to four Mississippi.

We are on an empty outer oval that looks like a squashed D and is about seven kilometers around. Maserati, ever the party killer, has installed chicanes about every click in case any of us loses control. But that does not happen this day, not with this car. In the distance between chicanes, the MC12 accelerates more than briskly, but then it descends into a deep depression. It barely hits 140 mph—hardly enough to win a street race against a nitro-powered Civic—leading us to conclude that the car could use another 600 horsepower.

Although the Maserati managers are of a different opinion and contend that American journalists are pazzo, they transfer us to a handling circuit, a different MC12, and an experience that is more like what we expected. Now we are up to about 160 mph while running on a much tighter layout, with sweepers and straights and slower turns right and left.

Even Maserati’s meccanico notices the difference, and after examining the first car the managers conclude that an oxygen sensor was on the fritz and was telling the big V-12 to reduce power before it became shrapnel. We then are brought back to the oval, given a new car, and invited to attempt laps as hot as we can stand them. The MC12 struts, yells, and blasts in its element, twitching easily to the rev limiter in low gears while climbing smoothly into sixth and the 170 mph range.

Yet high speed, even acceleration that shoves blood to the back of your brain and blurs your vision, is only a portion of the MC12 experience. For this, let us not forget, is a racecar, which means that it is fast but also incredibly flat. Even if you are a little brutal with the steering while exiting tight corners and while passing over the rumble curbs, you feel no sensation of weight transfer, no roll, and no reduced control, just a rapid and incredibly stable passage.

Braking is without a vestige of pitch. Each time you slow from a furious speed to a sedate one serves as an invitation to enter deeper and brake harder the next time, for you are given new limits by a racecar designed not just for power, but for ultimate performance at minimal risk.

In short, this is a car that makes the man smoother and quicker and proves that there is some truth to the myth of the road-going racecar.