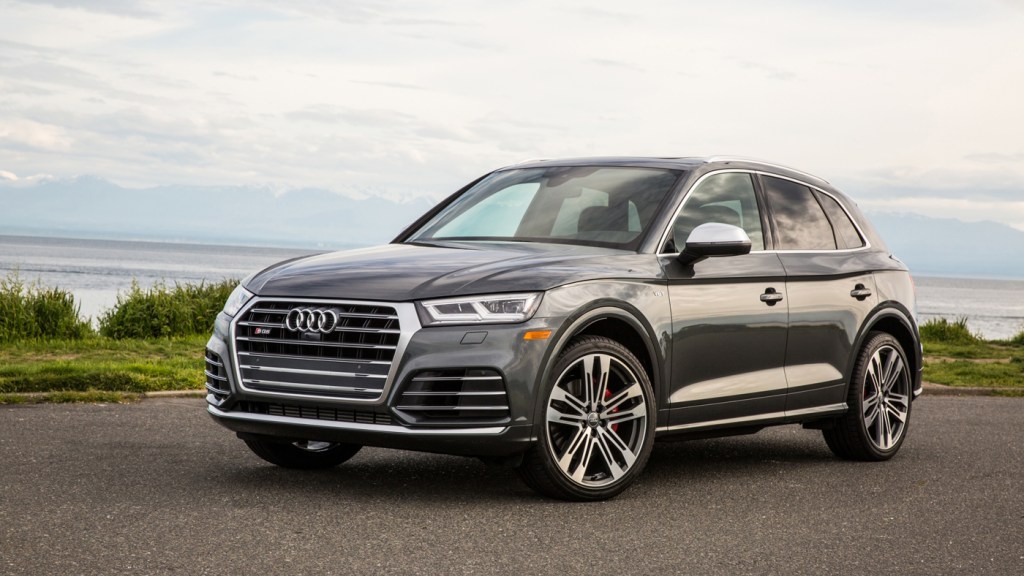 An update to Audi’s SQ5 brings better performance, sharper driving dynamics, and more space to an already capable midsize crossover. “SUVs are 53 percent of the premium market, and of those, one in four are B-segment [midsize] vehicles,” says Antony Garbis, Audi USA product planner. In other words, the stakes are high for the SQ5 (starting at $54,300), which competes against other sporty crossovers such as the Mercedes-AMG GLC 43.

Although Audi’s recipe for the SQ5 appears mostly unchanged, there are some notable differences: The wheelbase is half an inch longer — space that is dedicated almost entirely to rear legroom. The gaping single-frame front grille is ever-so-wider, flanked by full LED headlights. A sharp new “wave line,” borrowed from the S4 and S5, flows over the rear quarter panel and into the LED tail lights. As usual, the SQ5’s styling is slightly more aggressive than the standard Q5, set apart with aluminum horizontal blades across the large front grille, aluminum-trimmed side mirrors, and more pronounced side sills.

The heart of the Audi SQ5 is a new 3-liter twin-scroll turbocharged V6, shared with the current S4 and S5. On a drive in Vancouver Island, British Columbia, the SQ5’s 354 hp came in handy in passing zones on two-lane highways, where we blew by many a camper and logging truck with ease. Audi claims a zero-to-60 mph time of 5.1 seconds, though Garbis says that figure is “conservative.” Torque is readily on tap, with all 369 ft lbs available as low as 1,370 rpm. A new 8-speed Tiptronic automatic transmission is a fitting partner for the engine, with nearly imperceptible shifts. And different drive modes change suspension, steering, gearbox, and throttle characteristics. In Sport mode, the SQ5 also emits a slightly throatier growl.

Every SQ5 is fitted with a sport suspension and mechanical sport rear differential. Our test car had the optional air springs, which allows a broader range of height adjustment (lower for better aerodynamics, higher for more ground clearance). Also on our car was an electronic limited slip differential, which allows for better traction and exit speeds, and can send nearly all of the engine’s torque to one wheel if needed.

In the moments we were able to escape the myriad slowpokes on the winding roads of western Vancouver Island, the SQ5 remained solid and settled as we snaked through forests and over gushing streams. Despite its 4,400-pound curb weight, the crossover is balanced and steady, with very little hint of body roll. The cabin is also quiet, save for a bit of noise from the optional 21-inch summer tires. Steering feel, which is tightened up in Sport mode, is nicely weighted and not overly heavy. An optional variable ratio steering rack may be added to cars also equipped with the air suspension and the limited-slip differential.

Audi’s interiors have always been clean, simple, and straightforward, with some of the best finishes and materials in its class. The SQ5 bears this torch well, with leather upholstery and optional diamond stitching, as well as aluminum or carbon trim. Sport front seats cradle without stifling, and the second row fits even tall adults comfortably. With the rear seats folded flat, the new SQ5 also offers slightly more cargo space than the outgoing model.

Audi’s “virtual cockpit” option adds a fully digital and customizable instrument cluster that sits in front of the driver. When paired with the heads-up display, there is almost never a need to glance over to the center stack. Apple CarPlay and Android Auto integration come standard, and Audi’s suite of connected features include online traffic information, verbal news alerts, and more. Owners may also check mileage, lock doors, start the car, and set the climate control remotely from an Apple or Android device. The 2018 Audi SQ5 is on sale now.