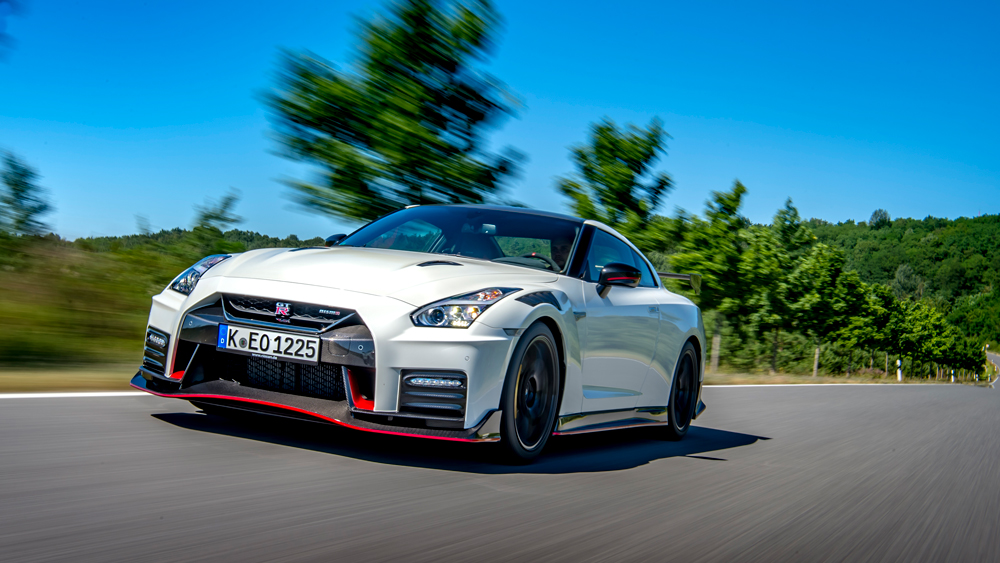 The Nissan GT-R is an anomaly in the fast-moving world of modern supercars. The current, long-serving model has poked a stick into the hornet’s nest of more conventional rivals for over 12 years. The powerful coupe still divides opinion like no other, yet maintains an almost mythical status. It has outpaced, out-handled and thoroughly embarrassed many competitors on the racetrack, with no respect for badge or breeding.

Nissan has upped its game even further with the arrival of a Nismo version of the model. Roughly double the price of a “standard” GT-R, the race-inspired Nismo also doubles down on driving excitement. The dodgy cabin may look like leftovers from a budget bin of Nissan parts, but don’t be fooled. It doesn’t take long in the driver’s seat to realize that the car has just been infused with a large shot of automotive Viagra.

Ignoring the cheap plastic dashboard parts and throwback trim—after all, the GT-R has been around since 2008—the Nismo offers some creature comforts, like auto wipers and lights, as well as Apple CarPlay.

Although the interior has dual-zone air conditioning, that system was broken in my test car, but Nissan apologized in advance. Strangely, fore and aft seat adjustment is manual, while the backrest is electric. Also, rear-seat passengers will be flummoxed searching for the well-hidden seatback release handle.

But don’t despair, press the starter button, cling on to the Alcantara steering wheel and dial up the fun. Loaded with four-wheel drive and a twin-turbocharged V-6 producing 600 hp, the Nismo is licensed to thrill.

While Porsche and McLaren coo about their latest supercars offering a more user-friendly driving experience, Nissan‘s GT-R Nismo is simply brutal. It has a rock-hard suspension, an accelerator that feels glued to your shoe and fearsome performance.

The steering seems telepathic as I hurtle around slow and fast corners, seemingly at the same breakneck speeds. The turn-in is astonishing and, when I finally lose my nerve, big carbon-ceramic brakes are always on standby.

For this Nismo, Nissan engineers have borrowed much from the GT3 GT-R race car. First, the Nismo has been put on a carbon-fiber diet, including the roof, fenders and that whopping rear spoiler. Together with new components, these features contribute to the car weighing 66.1 pounds less than before.

Scalloped vents in the front fender channel hot air away from the engine bay and provide greater downforce on the nitrogen-filled, 20-inch tires. The newly designed Dunlops have a wider tread with fewer grooves, increasing the contact point by 11 percent and boosting steering response.

A raft of small improvements throughout the GT-R combine to tighten up the ride. Nissan engineers have squeezed every last drop from the car, but it’s the dramatic changes under the hood that set the Nismo apart.

The hand-built, 3.8-liter V-6 is enhanced with GT-3 twin turbochargers, so acceleration to 60 mph is a Porsche GT3–beating 2.8 seconds. And the Nismo will keep on going through the six-speed auto gearbox to 186 mph.

With plenty of power and control, the GT-R Nismo checks all the performance boxes. In my opinion, the only weakness in the GT-R Nismo is the ability and nerve of the person behind the steering wheel.