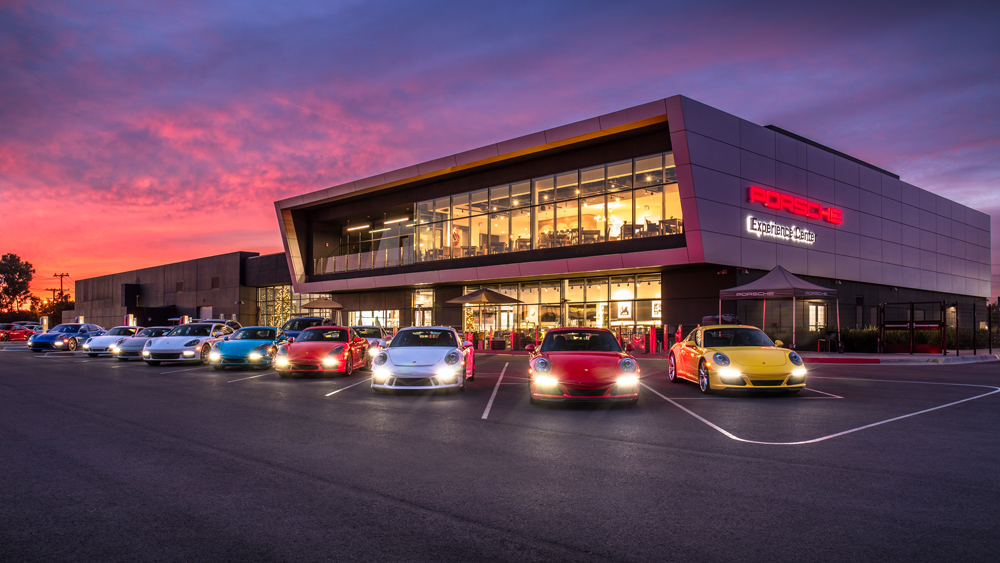 The odd aspect about being an automotive journalist is how easily you can lose your frame of reference. One week you’re hustling Bentleys through an abandoned airfield in Sicily, the next you’re pummeling Ferraris at the marque’s private circuit in Maranello. Humblebrags aside, I find that the ongoing battle for objectivity and nuance in the midst of this historically unprecedented horsepower war makes it trickier than ever to be objective.

Gulping from the firehose between Le Mans and Sepang for the better part of two decades has exposed me to virtually everything that goes fast. But the sensory smorgasbord sometimes requires recalibration. To take a step back and tune in to my true north, I turned to Porsche.

The Stuttgart carmaker knows a thing or two about speed, having claimed over 30,000 race wins over decades of motorsport competition. More relevant to my needs, however, is Porsche’s West Coast Experience Center, in Carson, Calif., conveniently located a short drive away from my home and staffed by a team of instructors with access to 53 acres of specialized training grounds.

Packed into the landscape are a panoply of challenges aimed at keeping drivers on their toes, from wet circuits to a “kick plate” which jolts the tarmac below in unpredictable directions. Critically, Porsche emphasizes that its Experience Center is a driver development circuit, not a racetrack. In other words, it’s all about education, not competition.

The grab bag of training tools is great. But my goal of bolstering fundamentals and unlearning roughly 20 years of accumulated habits demands a specialized approach, one that calls for more than just cursory lessons or rote learning. I’m directed to the Academy course, the most in-depth driver training program on the menu. Key to this curriculum is that it’s anchored by four separate sessions with one instructor, establishing a personal mentorship for the sake of consistency and accountability.

My guide for the high-speed proceedings is Andrew Chinnici, a youthful yet salt-and-pepper-haired instructor with a knack for easy speed and a calm, communicative demeanor. Incidentally, the latter is profoundly endearing within the machismo-infused world of driving instruction and motorsports.

There are four levels of Academy based on the vehicles used for coursework, and I’m signed up for the top tier, which focuses on the Boxster Spyder, Cayman GT4, 911 GT3, and 911 GT3 RS— among the most track-focused models from Porsche’s toolbox of road-going cars. The Boxster and Cayman are sharp little two-seaters, whose mid-engine configuration makes them extremely agile during the first session. Sometimes their extreme responsiveness is a liability, like how their ease of rotation on the wet skidpad makes it difficult to keep them in check on the low-friction surface.

Chinnici persists with patient pointers from the right seat as I struggle to tap into a natural rhythm of throttle, steering, clutch and gearshift inputs. I hold the line for little stretches, drifting the small sports car between the wet, painted white lines until its sideways attitude devolves into a pendulum swing of 180 degrees. Daunted, I return to the circle of frustration until, after much consternation and gnashing of teeth, I lather, spin, and repeat until I finally get it right.

Pitching the Cayman into a drift and holding it the entirety of the 300-foot circle is satisfying not just for the act of completion, but because it forges neural links of how it feels to dial in just enough throttle pressure and steering angle while compensating, in perfect rhythm, with the irregularities of pooled water. Holding the drift in a mid-engine Cayman or Boxster is surprisingly harder to do than in, say, a rear-engine 911. But I don’t bask in the accomplishment for long: Next it’s on to the kick plate, where my reflexes are challenged by a hydraulically actuated road surface that has an annoyingly unpredictable mind of its own.

Though sessions are separated by short classroom briefings and de-briefs, the three-hour meet-ups are fast and furious, with back-to-back stints at all but one of the facility’s eight features—one minute you’re sliding down the 7 percent grade of the “ice hill” while attempting to flick the car through a circuitous path, the next you’re chasing the instructor around the 1.3-mile handling circuit, linking many of the car-control techniques covered in the other modules.

By the end of the first session, I’m spent. In its optimal state, precision driving is a zen experience that clears the mind, but it can also devolve into a steering-wheel gripping, teeth-clenching and back-stiffening effort, especially in Porsche’s unforgiving, fixed carbon-fiber bucket seats, which are built for support, not comfort. But the experience is also exhilarating, offering repeated loops of effort, struggle and reward—an ongoing, gamified experience in which no two laps are the same.

The sit-downs with Chinnici outline areas for improvement and a few bright spots; I’m grateful later to have started the sequence in mid-engine models, because the rear-engine 911s offer more stability, making exercises like the wet skidpad that much more conquerable. However, because its engine is positioned over the rear axle, the 911 also requires an alternate driving technique, a different rhythm, and modified driving lines through corners. Under the guidance of an instructor, you’re never not thinking, and you’re certainly always trying to extract the most out of your mind and your machine.

A 911 Carrera 4S gets put through its paces.  Photo by Mo Satarzadeh, courtesy of Porsche Cars North America.

Scheduling the four sessions tightly together is ideal; like flying lessons, driving skills are best accumulated as regularly and close together as possible. The single-instructor approach also helps maintain continuity throughout the learning process. By observing driving behavioral patterns, both good and bad, the instructor keeps the student honest. And slowly but surely, some of the old ways of doing things are unlearned in favor of better, more effective methods. Finesse breeds speed, and the cumulative seat time paired with ongoing feedback help create a more holistic, consistent approach to driving.

By the end of the fourth session, which culminates with the sublimely capable and communicative 911 GT3 RS, I’ve developed a rapport, not only with Chinnici—whose instruction is insightful while not overbearing—but every inch of pavement on the facility. I’ve also developed more attuned attention towards the finer points of high-performance driving. Bad habits can creep into driving style even at elevated levels; upgrading them with new techniques can make it ultimately rewarding to make a powerful sports car dance under your command.

Like any form of advanced learning, fine-tuning one’s high-performance driving is a process. But the experience is also a reminder that techniques may seem so familiar that they become rote, which can lead to misplaced confidence. The latter is all the more reason to put yourself under scrutiny, reevaluate your approach and challenge yourself on the endless road toward self-improvement.