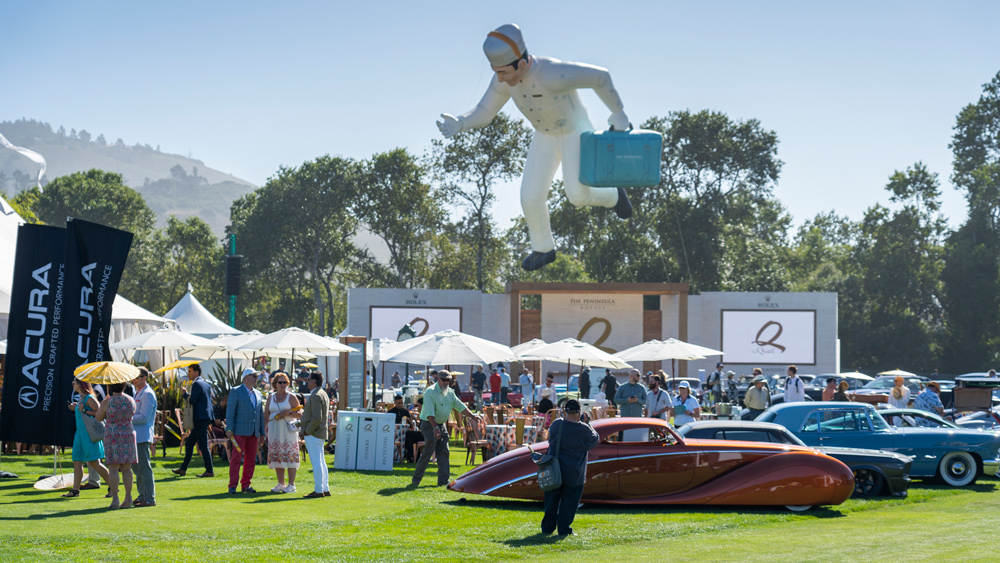 The Quail, A Motorsports Gathering is a mainstay of Monterey Car Week, the summer’s global epicenter of automotive culture that takes place annually in Northern California. Annually, that is, until last year’s unexpected shutdown of the world temporarily quashed the Quail’s exhibition, as with all other public events.

Fortunately, the garden-party-style extravaganza, put on by the Peninsula Hotels Signature Events team, is back for 2021, and will take place on Friday, August 13. It joins other key Monterey Car Week headliners, from the Pebble Beach Concours d’Elegance to the Rolex Monterey Motorsports Reunion to Concorso Italiano, in confirming their return after the 2020 cancellations related to Covid-19.

A bird’s-eye view of past festivities at the Quail Lodge & Golf Club.  Photo: Courtesy of the Peninsula Hotels Signature Events.

“We’re excited to be back,” says Kai Lermen, general manager of the Quail Lodge & Golf Club, the Motorsport Gathering’s namesake venue in sunny Carmel Valley. “Our 18th annual celebration will bring together like-minded collectors and enthusiasts to celebrate the golden anniversaries of several iconic vehicle models.”

On the honors list is a 50th anniversary fete for Alfa Romeo’s often-overlooked Montreal two-seater—just 3,900 examples were built between 1970 and 1977. The same milestone is being recognized for the Citroën SM, which is also part of a bigger commemoration of French automotive couture. Expect much popping of Champagne corks.

As before, a jaw-dropping display of more than 200 rare sports and racing cars is planned. Three new categories we can’t wait to drool over are the Great Ferraris, Custom Coachwork and the Evolution of the Supercar.

The Lotus Evija electric hypercar on display in 2019.  Photo by Ted Seven, courtesy of the Peninsula Hotels Signature Events.

What’s expected to be bigger and better than ever is the almost bacchanalian offerings of gourmet food and fine wines included in the $995 cost of entry. Also on the schedule is another Bonhams high-profile classic car auction and, surely, a new model debut or two from luxury and supercar marques, as has previously been the case. At the 2019 gathering, for example, Bugatti pulled the wraps off its $9 million Chiron-based Centodieci hypercar.

The automotive showcase is paired with first-rate dining and libations.  Photo by Ted Seven, courtesy of the Peninsula Hotels Signature Events.

If all of this has you reaching for that Amex Centurion card to grab a ticket, you’re already a little late—the general admission spots are entirely taken as of now, but that could change. “Because we are still confirming the health and safety protocols of the event, we have not yet confirmed the final number of attendants,” notes a representative for the event organizers. “We should know this by June 15, when the state of California is to fully reopen.” To be added to the waitlist, visit the Quail 2021 Database Request.

If waiting’s not your game, there’s also the philanthropic Charitable Patron ticket for $2,950, and the Quail Helicopter Package. Priced at $12,500, the latter gets you and three guests choppered into the Quail from Monterey Airport and handed VIP tickets that ensure early entry to the show field and access to the VIP lounge, making the already impressive car gala even more compelling.