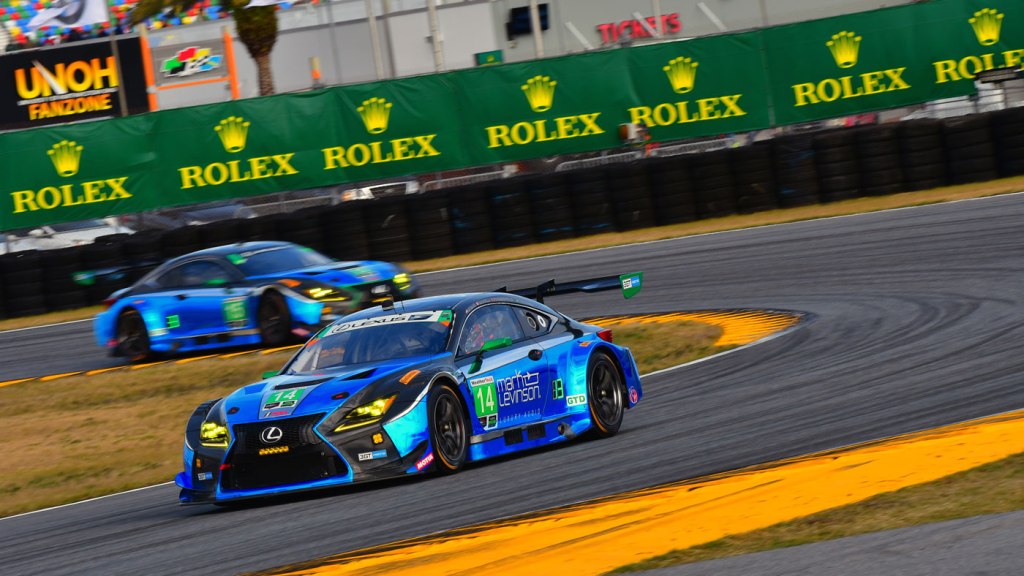 The ground trembles at the Daytona International Speedway as 50 cars roll out for their formation lap. Even with earplugs, the symphony of engines overwhelms the ears; the vapor of racing fuel fills the nostrils and the lungs. When the flag drops and the safety car pulls off, drivers from 25 countries embark on a 24-hour battle where every lap, every driver change, and every pit stop will contribute to their success—or failure.

Few races in the world are as grueling as the Rolex24 in Daytona. The first race in the IMSA-regulated, U.S.-based WeatherTech Sports Car Championship is a test of endurance for machines and humans alike, and reveals the strengths and weaknesses of both. Drivers such as Scott Pruett, one of the most successful endurance racers of all time, have to survive blazing temperatures and little sleep, sometimes putting back on sweat-soaked clothes to drive the next stint (this year’s Daytona will be the last race for Pruett, who is retiring after 50 years). Tires and engines are strained to the max. Yet, claiming a win at Daytona—or even a finish, regardless of position—is still an honor that gives car makers irrevocable cred.

Already a member of the Motorsports Hall of Fame of America, Scott Pruett retired from racing after the 2018 Rolex 24 at Daytona.  Photo: Courtesy Lexus.

As racing fans know, the series to which Daytona belongs is made of up cars across three classes: GTD, or race-prepped versions of road cars (think Lamborghini Huracán, Mercedes-AMG GT3, Porsche 911 GT3-R); GTLM, faster versions of GT cars that also meet the requirements to race in Le Mans (Ford GTs, Chevrolet Corvettes, the mid-engine Porsche 911 RSR). The Prototype class is the fastest, most technologically advanced class in the series, but shares the least in common with street-legal production cars.

Deciding to race—and what kind of racing to do—is a difficult and expensive proposition. In GT3 classes, fans can see the direct connection between the cars on the track and cars for sale in the dealership, while prototypes stretch the limits of speed and aim to boost brand cachet. Some invest in both; Acura campaigns its NSX GT3 car in the WeatherTech series as well as a prototype raced by Team Penske. Porsche has competed both in GT3 and in the Prototype classes, the latter most recently with the 919 Hybrid in the World Endurance Championship.

Cadillac joined the WeatherTech series in 2017 with new prototype cars, which dominated throughout the season and finished first and second (again) at Daytona this year. The program is an investment Cadillac hopes will pay off in the form of a more positive image for the brand. As the old saying goes: “Win on Sunday, sell on Monday.”

Lexus is another example of a brand looking to boost its image through racing. But instead of racing prototypes, the team is running a GTD-spec version of its RC F coupe. “The reason we’re going racing is to highlight our F Performance brand and to take that to the next level,” says Lexus motorsports manager Mark Egger. He explains that many Lexus buyers aren’t aware of the brand’s involvement in racing, and that the company hopes to not only attract younger buyers and racing enthusiasts, but to educate current customers and dealers.

Why should anyone care? Because even with the impending threat of robots taking over behind the wheel, good race cars still make for good road cars. “In going racing, we build some unique tools that we feed back into the production side of things,” says David Wilson, president of Toyota Racing Development (TRD), which does much of the tuning on Lexus’ race cars. Some examples of common features that come from racing include disc brakes, sequential and dual-clutch gearboxes, push-button start, paddle shifters, independent suspension systems, and more robust tires.

At this pivotal time when electric and other alternative power trains are spreading rapidly through the automotive industry, many wonder about the fate of petrol-fueled sports car racing. IMSA president Scott Atherton says the WeatherTech Series will be able to stay relevant: “Our mandate is to be on the cutting edge. The next generation (of race cars) will come in four years, and we are confident that everyone will say, ‘yes, that’s the right formula.’”

In the meantime, Daytona remains one of the most iconic races on the calendar. And although this year’s race is already in the books, the IMSA season is only just beginning. So grab a hot dog, breathe in the fumes, and enjoy the show.