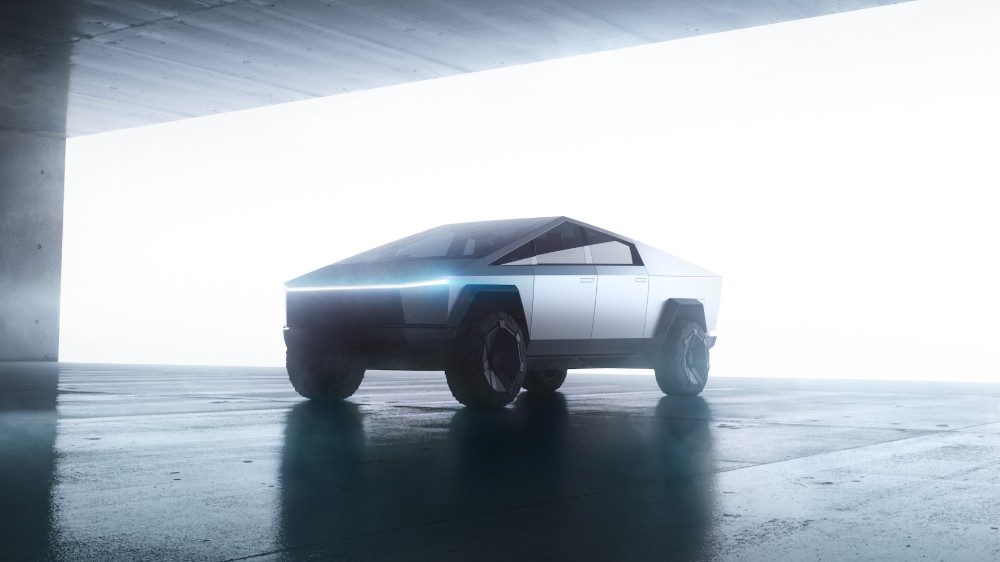 The future is now—or at least coming sooner than you think judging by the shockingly rectilinear Tesla Cybertruck that just debuted at manufacturer’s design studio in Hawthorne, Calif.

Musk unveiled the EV, which he’s previously referred to as “the coolest car I’ve ever seen,” at a special press event in Los Angeles on Thursday night. First teased at Tesla Semi’s unveiling way back in 2017, the Cybertruck was supposed to make its debut earlier this summer, but that date was pushed back to October and then finally to November 21.

Musk fanboys flooding the stage at the invitation-only event would have likely embraced anything the EV oracle debuted on this cool Southern California night with unconditional abandon. The mood in the room was, pardon the pun, electric. But when Musk finally lifted the curtain on his self-described “futuristic-like cyberpunk, Blade Runner pickup truck,” the crowd was palpably gobsmacked. After all, the angular, high-strength stainless steel-bodied off-roader is a brutalist wedge shape unlike anything the automotive world has seen to date. With its high-strength stainless steel skin and improbably triangular silhouette, the Cybertruck simultaneously stunned the audience in attendance while triggering heaps of skepticism from the online peanut gallery.

Mr. Musk’s argument wasn’t helped by a demonstration in which designer Franz von Holzhausen pitched metal ball bearings at the allegedly shatter-proof glass window and it shattered—not once but twice. “Oh my f—ing God,” Musk said. “Well, maybe that was a little too hard.”

One Tesla engineer in attendance remarked, off the record, that the development team made numerous attempts to destroy the surface through various measures, including taking a chainsaw to the thing. So the 1,001st time in front of the crowd didn’t go as planned. But despite the failed demonstration, Mr. Musk nonetheless managed to achieve something nothing short of remarkable. Following a relatively lackluster LA Auto Show in which a conveyor belt of SUV and crossovers illustrated the industry’s rampant conformity, the Cybertruck offered a rare moment of real shock, one that left the audience aghast in a manner reminiscent of the seismically controversial debut of Igor Stravinsky’s Rite of Spring, an orchestral work that sounded so alien to contemporary ears that it inspired a riot.

A brief ride in a two-motor version of the truck revealed an interior as minimalistically finished as the exterior, with a large centrally positioned, landscape-oriented touchscreen obviating the need for physical switchgear. Also present: a steering wheel that would look more at home in a Gulfstream jet (or KITT) than in a modern production car. Ride quality is smooth thanks to an adaptive air suspension solution, revealing quite a bit of noticeable pitch and roll during hard maneuvering. Acceleration was remarkably swift in the two-motor model we rode in, and the top version should be even quicker. But the real treat comes from the peak-tipped interior’s sightlines: a glass-toppped roof and a clear view of the letterboxed truck bed produces a distinctly modernist field of vision.

Musk says the truck will be available in three forms when it goes into production in late 2021: single motor ($39,900), dual-motor ($49,900), and tri-motor ($69,900). The top dog model is expected to achieve over 500 miles in range, and accelerate to 60 mph in under 2.9 seconds. Those are heady numbers for any vehicle, let alone one with a boggling max towing capacity in excess of 14,000 pounds. But if there’s an organization that who can pull off this bold vision of the future, it’s Tesla. The pundits will have their say, but we’d be hard pressed to bet against the serially underestimated Elon Musk.

If the Cybertruck does, in fact, come out in two years, it will be entering a more crowded electric truck field than was initially expected. Earlier this summer, Ford announced plans to offer an all-electric F-150 by the middle of the next decade while showing off a prototype capable of towing a million pounds. There are also rumors that General Motors may resurrect the defunct Hummer brand as a line of electric vehicles.

Check out more photos of the Cybertruck below: