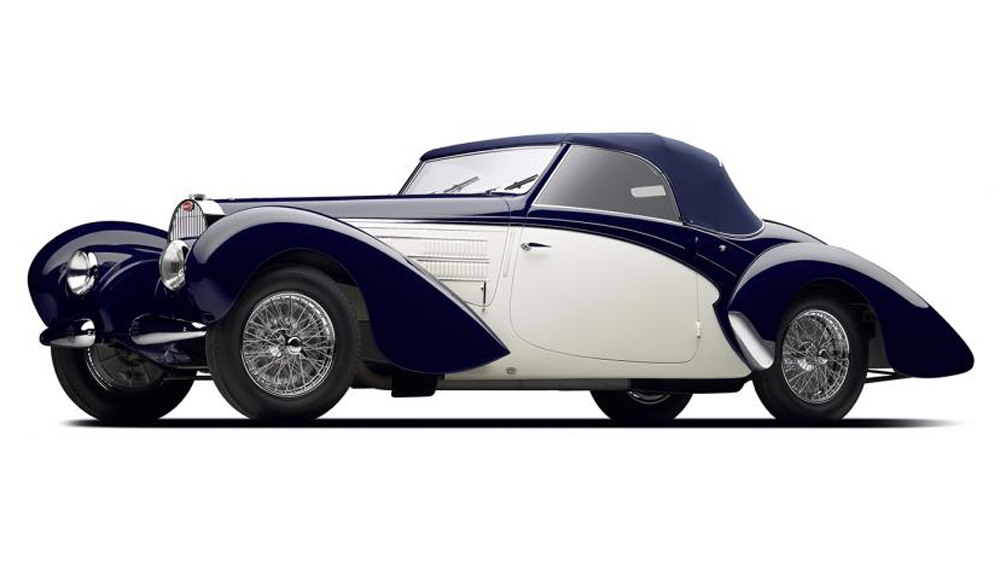 Photo by Michael Furman, courtesy of the Mullin Automotive Museum.

For most, a glimpse of the astounding collection of French-made automobiles amassed by longtime enthusiast Peter Mullin remains a rare opportunity. Open only two days per month to the general public, the Mullin Automotive Museum, in Oxnard, Calif., houses some of the most beautiful vehicles ever built, cars that in fact recall sculpture more than transportation.

But the masses will get a peek at a few gems from Mullin’s vault next month, when a half-dozen favorites make the trip to Northern California to be displayed during the annual Monterey Car Week, which includes the fabled Pebble Beach Concours d’Elegance, the Rolex Monterey Motorsports Reunion and The Quail, A Motorsports Gathering.

“The cars we chose to bring all have special histories, and none are widely known,” says Mullin. “In the end, I always look for stuff that gets my heart pumping, so maybe they’ll do the same for others.”

All of the largely prewar cars heading to the region—two Talbot-Lagos, one Talbot, two Bugattis and a Delahaye—hold a special place in Mullin’s heart, but he brightens to another level when asked to talk about one of the two Talbot-Lago racing cars that will appear on the circuitous corkscrewing curves of WeatherTech Raceway Laguna Seca.

“When I get in this car [a 1936 Talbot-Lago Type 26 SS Roadster with body by Figoni and Falaschi] knowing that the great [French racer] Rene Dreyfus had driven it, a lot goes through my head,” says Mullin, who will pilot that famed four-wheeler at the track. “When I met him, he described races that he won with this car, he could play it back, lap by lap, a half-century later. And that’s always stayed with me.”

The other Mullin entry hitting the track that day will be an impossibly sleek 1950 Talbot-Lago Type 26 Grand Prix, a vehicle that sees regular duty at historic racing events around the world.

Guests at The Quail, a Motorsport Gathering will be able to see Mullin’s 1931 Bugatti Type 49. While its notable specs include the last appearance of the vertical-valve, single-cam straight-eight engine, it’s the seductive four-door coachwork by Gangloff that makes the car stand out in a crowd.

The Bugatti Type 49.  Photo by Michael Furman, courtesy of the Mullin Automotive Museum.

Finally, visitors to the storied 18th green and fairway at Pebble Beach golf links will take in a trio of examples that, as Mullin puts it, “exemplify the mix of performance, engineering and design that make these cars so special.”

Mullin explains that the Delahaye captured him, in particular, because “when you look at the elegant coupe style on a racing chassis, with those lines that Chapron was famous for doing, it’s impossible not to be blown away.”

The 1937 Delahaye Type 145.  Photo by Michael Furman, courtesy of the Mullin Automotive Museum.

The Bugatti Type 57C also has a story, of course. Mullin explains that the car was built by Jean Bugatti for driver Maurice Trintignant. “Now Maurice was the top driver for the factory racing team for a while, and Bugatti himself raved about the looks of this car, so that was hard to ignore,” says Mullin. In fact, once he acquired the car, Mullin flew the then elderly Trintignant and his wife over from France to help supervise a restoration.

“They stayed at our house, and the deal was I’d bring him here and up to Pebble and he would help me decide what color palette was correct for this car originally,” says Mullin. “It may have been decades later for him, but he had this amazing ability to recall the colors in his head to get us to the car you’ll see up there. It hasn’t been to Pebble in 15 years, and never in its true, final configuration.”

As if car connoisseurs really needed another excuse to race to Pebble Beach next month, here are six more courtesy of one of the planet’s finest collectors of French automotive art.