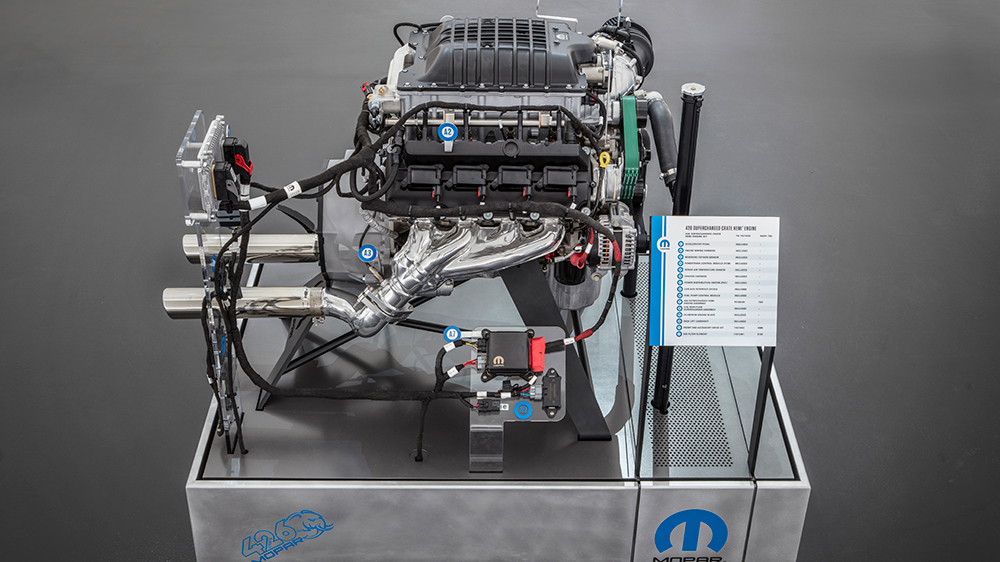 If you want to join the horsepower comma club, previously your options were somewhat limited. You can ship your wheels to Hennessey Performance—who would love nothing more than to imbue each and every last vehicle with 1,000 ponies—or you can spent many hours and dollars on modding your existing mill to eke every last bit of oomph out of it. Fiat Chrysler North America came up with a better solution. The Mopar “Hellephant” crate engine was introduced earlier this year at SEMA’s 2019 show in Las Vegas and likely had to bring extra towels to its booth to wipe up all the drool. And on 4/26 (Hemi day), it officially became available for orders.

Want one? Of course you do. You’ll just need $30,000, but you’ll be getting an impressive 426 cubic inch Hemi V-8, packing 1,000 horses and 950 lb-ft of yank. That 7.0-liter, all-aluminum block boasts a supercharger with a high-efficiency rotor, throttle body, flywheel, water pump, a front sump poil pan as well as fuel injectors and coil packs.

What should you wedge your new Hellephant into? Well, anything you wish that has sufficient room in the engine bay, but it’s designed for vehicles made before 1976, thus the Mopar crew is also offering an additional kit with an accelerator pedal, engine wiring harness, chassis harness, a ground jumper, oxygen sensors, fuel pump control module, a CAN bus interface device, a power distribution center and a powertrain control module, all for about $2,300.

Why did FCA decide to bestow the world with this gift? “The reaction when we revealed the ‘Hellephant’ engine at the SEMA show was just amazing,” said Steve Beahm, head of parts and service at Mopar. “The momentum continued after the show, with close to 1,000 people expressing interest in buying this engine. Power and performance are ingrained in our brand’s DNA.”