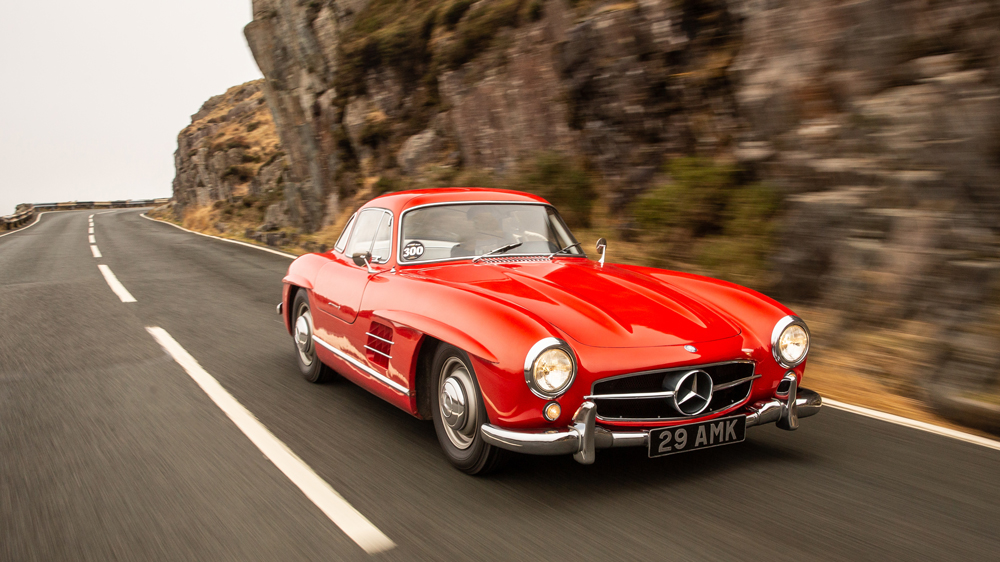 Conventional wisdom says the Lamborghini Miura was the first supercar, but the Mercedes-Benz 300 SL–launched some 12 years earlier–is arguably the true origin of the species. In 1954, it was certainly more “super” than anything else.

The model looked fabulous, for a start, particularly with its signature doors aloft. The latter were an engineering workaround due to the high-sided tubular chassis, but they inspired the car’s “Gullwing” nickname, along with numerous imitators, from De Tomaso to DeLorean. Even today, a 300 SL oozes rarefied, high-society glamor.

The 300 SL (for Super Leicht, or “Super Light” in English) had what could be considered genuine supercar performance for the day. A 215 hp, 3.0-liter straight-six—the first production engine with fuel injection—propelled the SL to 60 mph in 8.5 seconds. And a top speed of 161 mph was perfect for Germany’s newly-built autobahn road system.

On top of all that, the 300 SL Gullwing boasted a superb motorsport provenance. Gullwings won at Le Mans and the Nürburgring, alongside victories in the European Rally Championship and Carrera Panamericana road race. The subsequent 300 SL and 190 SL roadsters were more conventional, but this was a race car for the road.

Case closed, then? It is after you drive one. I have that privilege thanks to Hilton & Moss, one of the UK’s leading classic Mercedes-Benz specialists, based near London Stansted airport. The specific 300 SL that I am to pilot had been sold new to a stateside doctor in Denver, Colo., and has spent the past 28 years in the private collection of a Middle Eastern prince. With 82,000 documented miles and plenty of patina, the car has an asking price of $2.1 million, which includes the cost of a ground-up restoration by Hilton and Moss to the new owner’s exact specification. It will be the closest you’ll get to a factory-fresh Gullwing.

For me, any 300 SL is sacred, so I’d have mine restored as faithfully as possible, including a fresh application of the original Feuerwehrrot (fire-department red) paint. Many Gullwings were silver, of course—the only color offered as a no-cost option—but red seems well suited to a supercar. Idling breathily outside the showroom, with rain droplets beading on its long hood and tapering tail, the Gullwing looks achingly beautiful.

Pull a delicate aluminum lever and the lightweight doors swing skyward. The steering wheel pivots down via a quick-release lever to aid access, but there’s still no graceful way for a middle-aged man to enter a 300 SL. I brace my body against the B-pillar, step in with my right foot, slither awkwardly across the sill, then drop with a sigh into the soft leather seat. People were smaller in the 1950s: that’s my excuse, at least.

Once ensconced, I immediately start to feel quite warm. The only fresh air comes from opening the quarterlights—the side windows don’t roll down—or via two vents in the roof. In other respects, though, the interior is very practical and user-friendly. There’s a large luggage shelf behind the seats (Mercedes-Benz offered a pair of fitted leather suitcases) and the driving position feels aligned and reassuringly upright. There’s even good all-round visibility thanks to the canopy-style cockpit—hardly a given in a road-legal racer.

In 1956, the year this car was built, Stirling Moss drove a 300 SLR to first place in the Mille Miglia, averaging a still-incredible 98 mph over 993 miles. My drive will be slightly more sedate, and I won’t have reckless spectators cheering me at every turn, but it still includes some fast-flowing British A-roads and tightly-coiled country lanes—the kind of places a supercar should shine, in other words.

Mercedes-Benz originally offered a pair of fitted leather suitcases for the luggage shelf behind the seats.  Hilton and Moss

The Gullwing’s clutch is light and its four-speed manual shift—via a ball-topped, Ferrari-style lever—feels notchy and positive. There’s no power steering, but the large spindly wheel gives you plenty of leverage, even at parking speeds. The wonderfully retro, triple-tone dashboard is dominated by two dials: a 160 mph speedo and a rev counter redlined at 6,000 rpm. Nonetheless, it’s the oil pressure and water temperature gauges that I find myself checking most studiously. Old classic-car habits die hard, even when in something as impeccably engineered as a 300 SL.

The dry-sumped six-cylinder engine clears its throat a little, then pulls eagerly from 1,500 rpm, gaining a second wind beyond 3,000 rpm. Maximum torque of 203 ft pounds arrives at 4,600 rpm, by which time the engine’s voice has risen to a deep-chested mechanical snarl; less furious and extroverted than an Italian V-12, but almost as soul-stirring. Indeed, docile and tractable torque is this motor’s defining characteristic. It feels like you could travel everywhere in third gear.

With 82,000 documented miles and plenty of patina, the car has been in the same private collection for the last 28 years.  Hilton and Moss

If the muscular engine puts you at ease, the Gullwing’s all-round drum brakes demand your attention. The middle pedal requires a concerted shove, and overall stopping power wouldn’t trouble one modern carbon-ceramic disc. The vague, recirculating ball steering also needs regular corrections, keeping you alert and engaged. And oversteer never feels more than an indelicate throttle-prod away, especially on damp roads and with modest tires. Hustling a 300 SL on the Mille Miglia or Carrera Panamericana must have been intense, physical and outrageously exciting.

Above all, this car offers an overwhelming sense of occasion. Driving one of motoring’s untouchable icons is a true privilege. Of the only 1,400 coupes made, fewer than 1,000 examples are estimated to survive today. If you’re looking for a blue-chip classic that can still be put through its paces and enjoyed, a Gullwing is surely near the top of that list.