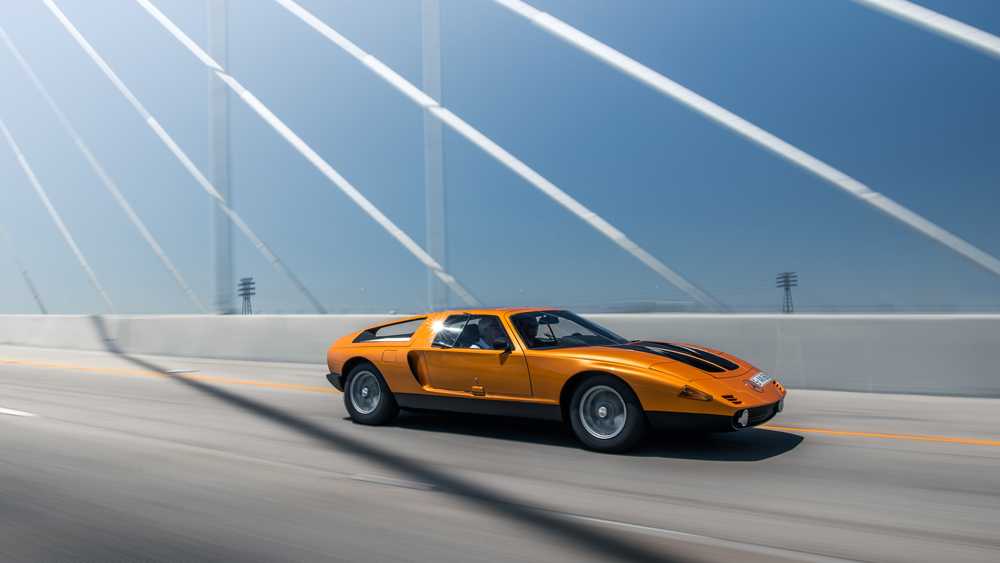 The reason for the trip was a purposeful one: to fettle the paint finish and get the precious experimental car ready for Mercedes-Benz’s exhibit at Pebble Beach during Monterey Car Week. But instead of opting to deliver it safely enclosed in a transporter, the car’s custodians decided some fun might be had braving the Monday-morning rush hour on what could be the most onerous freeway slog this side of the Bronx Expressway.

A few minutes within leaving the Petersen, in a scenario perfectly suited to Los Angeles traffic, the car hiccupped on Wilshire Boulevard and occasioned a crew of specialists, following in an appropriately liveried Classic Center transporter, to minister to minor issues as the glances of passersby alternated from annoyance to wonder at what may as well have been an orange missile parked in the median. My hosts and I took advantage of the interruption to duck into the Beverly Wilshire Hotel for coffee and conversation.

There, my affable driver turned what could have been “just” a classic-car discussion into a more substantive one, explaining that the recent sale of the factory’s Uhlenhaut coupe—at $143 million, the highest recorded automobile sale in history—will serve a higher purpose. The proceeds will anchor the endowment of 1,000 scholarships, annually, to promising students—all with an eco-centric mindset—whose means might not otherwise allow them to pursue a career path in automotive transportation.

This ambitious and altruistic commitment from the world’s most ubiquitous automotive luxury brand, is based on the company’s own history. It seems, as Breitschwerdt explained, that two of the three company patriarchs—Gottlieb Daimler and Wilhelm Maybach—were themselves from families of modest means, and their trajectory was made possible only through education provided by the largesse of local institutions. Breitschwerdt, who has hung his hat at Mercedes-Benz since 1991, and held a variety of substantial positions, is firmly committed to championing this goal.

We get back on the road, and when the opportunity avails itself, Breitschwerdt gooses the accelerator. The C111 fairly flies, turning the heads of drivers curious enough to look up from their cell phones and makeup mirrors. I’m glad I’m not behind the wheel of this precious artifact in the city’s stop-and-go traffic, where rear ends buck up in the air like angry rodeo bulls while brake lights burn bright. When a lane opens, my driver snicks the five-speed shifter into a higher gear as we gain some speed, punctuated by the deep exhaust of a good old-fashioned V-8 engine. The two-person cockpit is a bit austere but with plenty of room for elbows and good forward vision. Forget about the rear. The chaise-lounge bucket seats upholstered in houndstooth fabric—oh so German—are a swank counterpoint to the orange metallic paint called weissherbst (white autumn) that looks strikingly contemporary today.

The two-place cockpit is a bit austere but with plenty of room for elbows and good forward vision.  Robin Trajano, courtesy of Mercedes-Benz.

Cabin temperatures comfortable for a tropical chameleon were an added bonus. Thankfully, we exit toward Marina del Rey and meander along Pacific Coast Highway through the beachside towns all the way to the colossal new Mercedes Classic Center, which opened last week to much fanfare. On exhibit are some of the most beautiful classic cars on the planet . . . many of which were bereft of air conditioning as well. But when a car is beautiful, who cares? One look at the gleaming automotive jewels on the polished concrete floors gives occasion to rejoice in pristine paint and the profile of a Gullwing or Pagoda, reminders that elegant design is never outdated.

The C111 plays Peekaboo with its headlights.  Robin Trajano, courtesy of Mercedes-Benz.

The C111 time machine we took to get here was one of a series of experimental automobiles created by Mercedes-Benz in the fertile design decade of the 1960s. It served as a platform to try a number of rear-mid-engine layouts using Wankel engines—promising in the period—and diesels, for which the company was famous. All but three of the cars built were powered by a Wankel, debuting with a three-rotor unit. By 1970, a second-generation car used a 2.4-liter four-rotor version, which developed 289 ft lbs of torque between 4,000 rpm and 5,500 rpm and 345 hp at 7,000 rpm. Reported as being capable of reaching more the 186 mph, it had a fiberglass body bonded to a steel frame and featured Mercedes’ trademark gullwing doors, causing fans to hope it would become the replacement for the then-15-year-old 300 SL.

Originally, the C111 served as a platform to try a number of rear-mid-engine layouts using Wankel engines.  Robin Trajano, courtesy of Mercedes-Benz.

The engine, patented by Felix Wankel in 1929, proved impractical. Ultimately, high emissions and low fuel economy, inherent in the design, compounded by insurmountable reliability issues, eventually sent the Wankel engine out to pasture. Subsequent iterations of the C111 included two examples powered by diesel engines and one fit with a twin-turbo V-8.

Our C111 has been retrofitted with a 3.5-liter gasoline-powered Mercedes-Benz V-8, which acquits itself admirably throughout our drive. A few cars, developed expressly for establishing speed records, handily disproved that diesel engines weren’t competitive. Here, aerodynamics played a hand. The C111’s project manager was Bruno Sacco, the Italian-born designer who became head of styling for Mercedes-Benz in 1975 and molded the company’s aesthetic until retiring in 1999.

This C111 has been retrofitted with a 3.5-liter gasoline-powered Mercedes-Benz V-8.  Robin Trajano, courtesy of Mercedes-Benz.

Sacco believed that a designer must look 30 years ahead. If that’s the case, he really overshot with his C111, as it still looks fresh today, with its shapely lines, low drag coefficient and low height of 44 inches—only 4 inches taller than a Ford GT40. Thirteen of the original examples survive, all in the possession of the manufacturer. Which begs the question: how many scholarships might a single C111 endow?

Click here to see all the photos of the experimental 1970 Mercedes-Benz C111.