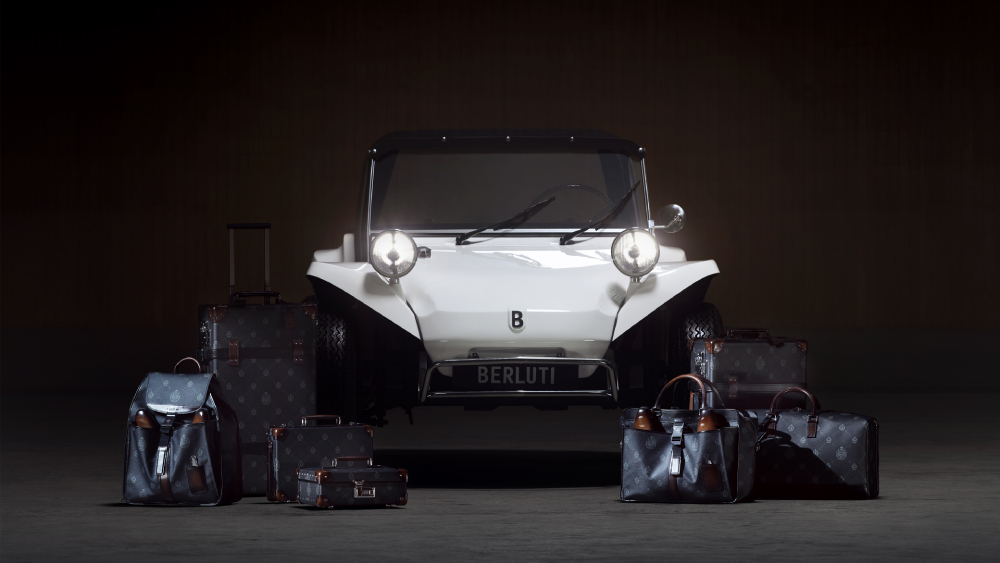 The very idea of beach buggies may seem quaint in a modern landscape filled with Mad Max-esque dune carts. But Berluti is tapping into that nostalgia factor for its latest limited-edition product.

Inspired by the signature printed canvas devised by head designer Kris Van Assche and the brand’s recent Globe-Trotter luggage collaboration, Berluti’s new beach buggy will fit in at the ritziest shorelines. Though designed with a stately body, it is made in homage to the rebellious and carefree lifestyle of Southern California in the 1960s.

Handcrafted using a Volkswagen Beetle frame and motor and a polyester shell, it is an exceptionally light 500KG (about 1,212 lbs.) and runs on an air-cooled 1600cc flat-four engine with a twin carburetor and 90 horsepower. A rollover protection structure doubles as a surfboard stand, making it ideal for those looking to take it off-road in search of the best waves.

The Parisian label is famous for its richly patinated leather, having operated as an exclusive cobbler until branching out into apparel in recent years. As such, the dashboard, steering wheel, gear lever and the two seats are covered in smooth hide handcrafted in Epernay, France, by Sellerie Duval. Additional bespoke details include a signature print canvas soft-top, a removable luggage carrier encased in black leather and a palladium-finished brass Berluti logo on the hood.

Invented in 1964 by Bruce F. Meyers in Newport Beach, the first dune buggy under the Meyers Manx marque was designed as a way to comb sandy shores while scouting the perfect surfing spot. It was sold as a car kit with a lightweight fiberglass body which, like this contemporary iteration, ran on a Volkswagen Beetle engine. It didn’t take long for the miniature automobile to become so entrenched in the culture that is snagged appearances in films as famous as Elvis Presley’s Live a Little, Love a Little and The Thomas Crown Affair.

The Berluti buggy is available by special order only.