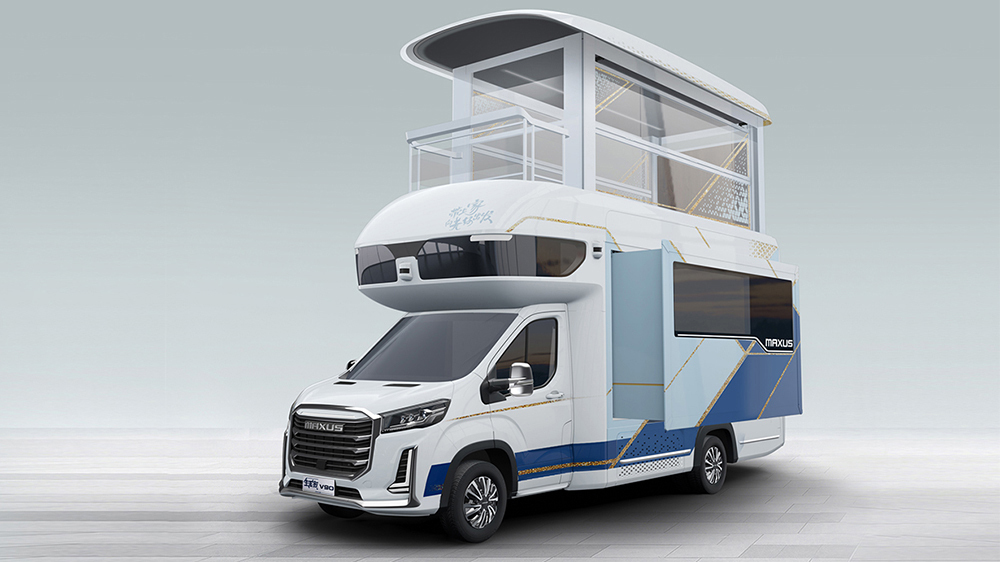 When camper makers want to add space to a trailer, the solution is usually the same: They make it longer. But one Chinese automaker is taking a decidedly different approach to solving that conundrum. Instead of adding a second axil, the SAIC Maxus is adding a second level.

The Life Home V90 Villa Edition is a double-decker camper that, when fully expanded, offers two floors of living space. Thanks to a pop-up second level, the camper has room for the standard kitchen, entertainment and sleep areas, as well as a bar and Zen tea room.

Pop-up roofs are nothing new, of course, but we’ve never seen an entire pop-up level like the one on the Villa Edition. Although it looks like your standard, everyday RV in drive mode, its oversized roof section hides a glass-encased second story that can be expanded to full height at the press of a button. The upper area is accessible via a small elevator and was designed with rest and relaxation in mind and offers nearly uninterrupted views of your surroundings. At 133 square feet, it’s smaller than the lower level, but there’s more than enough space to turn the space into a tea room or yoga area. There’s also a walk-out balcony over the driver’s cabin if you need a little air while up top.

But that’s not the only way SAIC Maxus’s camper can open up. The main living level features driver- and passenger-side slide-outs sections to make its already spacious living area even bigger. When fully expanded, the lower level measure 215 square feet and has enough room for a full kitchen and a roomy lounge area split up by a bar. The main sleeping area is located in the alcove above the driver’s cabin, and it looks like both the first-floor entertainment area and the entire second floor can be converted if necessary. A bathroom and shower are located in the back. Other features include customizable LED lighting, a JBL sound system, hookups for a TV or projector, a washing machine and air conditioning.

Unfortunately, if you have your eyes on the Villa Edition, you might be in for a long wait. SAIC Maxus currently only sells its RVs in China, and it’s unclear if that will change anytime soon. If the RV ever makes it Stateside (and we hope it does), the Villa Edition reportedly starts at CN¥2.68 million, or about $413,000 at current exchange.