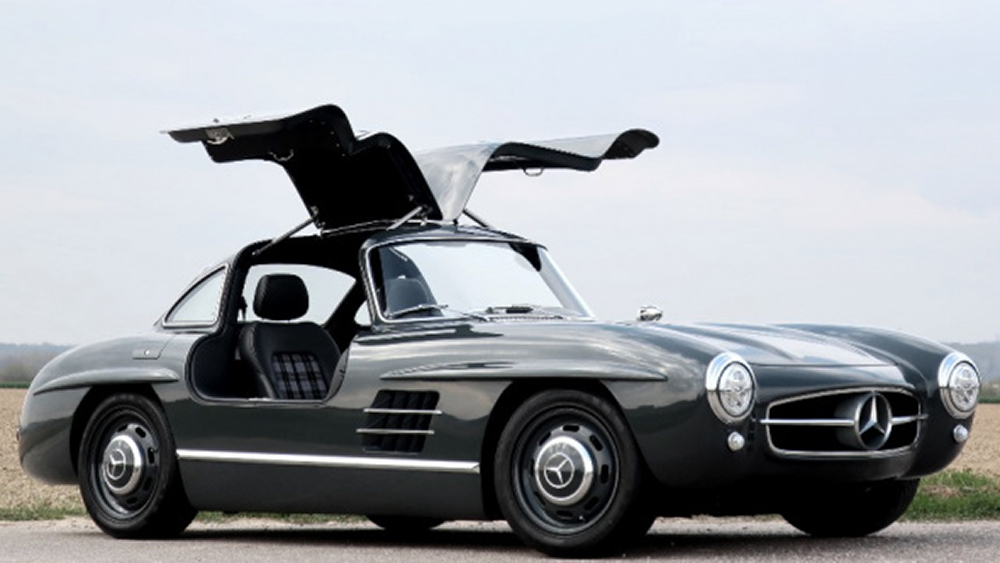 The Mercedes-Benz 300 SL Gullwing is analog heaven. With a prodigious inline-six mated to a four-speed transmission, a rear swing axle, steel wheels and drum brakes, it was made for those who wanted to experience the joy of driving. Back in the ’50s, when the 300SL debuted, it packed more power and top-end speed than most other cars rolling off assembly lines. And it was rightfully heralded as a triumph of design, engineering and performance. It’s no surprise the market for 300 SL has exploded over the past decade, with the gullwings hammering for millions.

One Mercedes-Benz enthusiast and collector was enamored with the idea of mixing automotive history with modern creature comforts and the resulting creation is what you see here: a Mercedes SLK 320 that’s been reimagined as a 300 SL. That’s a polarizing proposition, and there’ll be a fair amount of enflamed purists decrying this vehicle as sacrilegious. Despite what you may think of the mashup, it’s clear the exterior is impeccably recreated.

It’s up for sale, for about $225,000 per the listing on ClassicDriver, and there’s more information over at German seller Car-Special, though some things may be a bit lost in translation. It sounds like the project began by yanking the SLK 320’s body off the chassis, and replacing it with the custom bodywork you see here. The listing doesn’t note the body’s material the body, but it’s a dead-ringer for the real deal.

Inside, the dashboard instantly gives away the donor car. It’s definitely a let down, given the attention to detail that was paid to the exterior, but then again it looks more comfortable in there than in a real 300 SL. There’s air-conditioning, plush sport seats with headrests, and sliding windows. In a proper 300 SL, you can drive at top speed, light a match in the middle of the cabin and it’ll burn down to your fingers. There’s just no airflow in that cabin, so air-conditioning is likely the most welcome addition here. You also get the rest of the SLK’s safety aids, like airbags, ABS and ESP, and it’s got power steering, another bonus.

The powerplant is the SLK’s 3.2-liter V-6, good for 218 horsepower—not that far off from the specs of the original 300 SL—and it comes with a six-speed manual transmission. The owner had special wheels made from aluminum, in contrast to the steelies that the 300 runs, and the chassis has a tweaked suspension to lower the ride height a few centimeters.

The ideal buyer will want a nostalgic feel while enjoying hours behind the wheel and not worrying about depreciating the value of the machine. Even if that person’s not you, assuredly someone will snap this bargain 300 SL up.