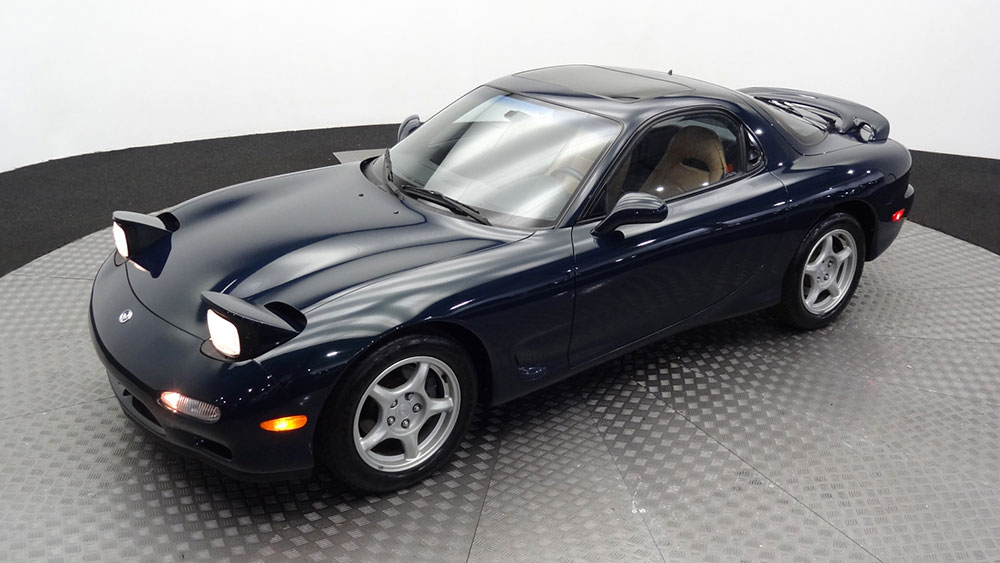 It’s no secret the Japanese import market has been exploding recently. There was the Toyota Supra MKIV that hammered at RM Sotheby’s in Amelia for $173,600 (with a buyer’s premium) in late March. A few months earlier, a 1994 Supra with a mere 7,100 miles on the odometer fetched $121,000 on Bring a Trailer, and we recently chatted with BaT co-founder Randy Nonnenberg about how iconic Japanese classic’s value have finally reached a fever pitch of enthusiasm. Now, the auction site has a pristine 1994 Mazda RX-7 Touring with less than 5,000 miles listed and no one would be surprised if bidding moved into the six figures.

The car is finished in Montego Blue Metallic with a tan leather interior, and the Touring model status sees the factory addition of a sunroof, fog lamps, rear window wiper and a Bose Acoustic Wave sound system. This vehicle was also fitted with an optional factory spoiler, which nicely rounds out the RX-7’s sporty look. With just 4,600 miles on the odometer, the car spent more than a decade sitting around in Virginia before the current seller snapped it up a year ago. At that time, an oil and filter change transpired, new spark plugs were swapped in along with a new battery. And the fuel tank was thoroughly examined.

Under the hood, a sequentially-turbocharged 1.3-liter 13B-REW rotary engine churns up 255 horsepower and 217 lb-ft of twist. That power gets to the rear wheels via a five-speed manual transmission and a limited-slip differential. The Mazda’s got a clean Carfax, though some minor paint issues are noted in the video walk-around, embedded below. At the time of publishing, bidding had crested $52,000. Considering the car cost around $32,000 when new, that’s a sizable amount of scratch, but you can expect bidding to continue climbing before the auction’s end in a few days.