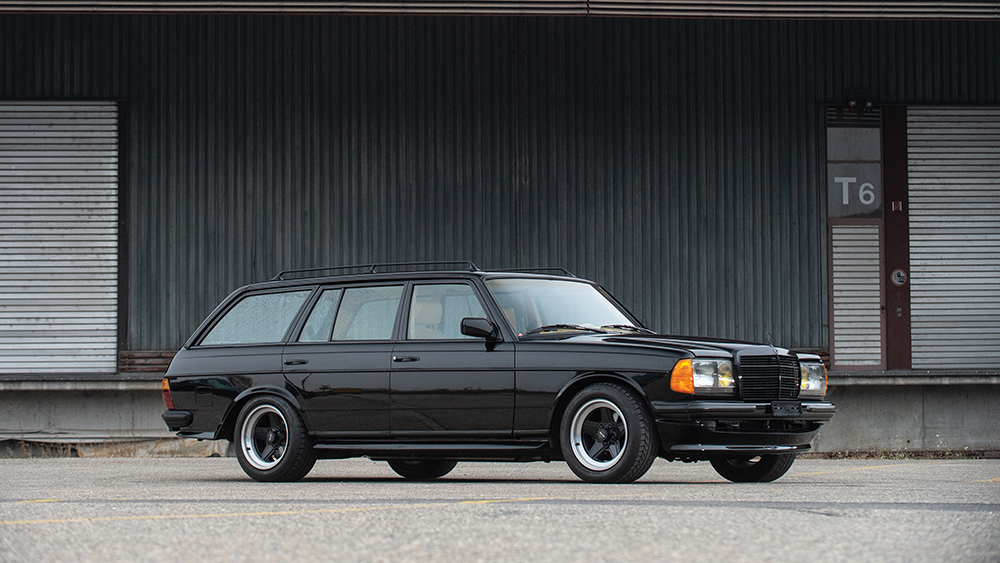 Before Mercedes-Benz and tuning house AMG officially teamed up in the ’90s, the close relationship between the Stuttgart manufacturer and the Affalterbach upfitter produced some incredibly powerful and rare beasts. The first and most iconic vehicle born from the partnership was the 1971 300 SEL, so nicknamed the Red Pig for its polarizing appearance. No one laughed when it won its class and finished second overall at the 24 hours of Spa, though, and AMG had begun forging a name for itself in terms of uncompromised performance. Now, as RM Sotheby’s Essen auction approaching in April, you can have the chance to own a rare piece of Mercedes-Benz and AMG history: this 1979 Mercedes-Benz 500 TE AMG.

As part of the “Youngtimer” collection, this wagon looks achingly perfect. The W123 chassis was given AMG’s M117 5.0-liter V-8, and special tweaks to the headers, downpipes, oiler coolers, and more were implemented to wedge that massive beating heart into the prow of the wagon.

It’s an extremely early conversion for AMG, and only a handful of W123 chassis received the M117 engine, per RM Sotheby’s, and they were expensive endeavors, running the customers approximately $40,000 back in the late ’70s. Rumor has it only two sedans, one coupe, and two wagons were given such treatment, making this very specimen a hyper-rare one-of-two. However, the specific provenance of this car remains murky, as records for the engine don’t match the chassis.

Because the estate has a full AMG body kit, an OE skid plate, a cast aluminium rear suspension, date-stamped 1979 Recaro seats that match the door cars, and other touches that support an early AMG work, the auction house is concluding that the car was either built in-period by AMG or by someone who had extensive AMG knowledge at a time when few people outside the tuning house would possess that information. While the early history remains a mystery, it was cosmetically refreshed in 2013 by a California-based AMG buff, and it was used by Top Gear in a segment celebrating the 50th anniversary of AMG. Whenever and wherever it came from, the $68,000 to $79,000 USD opening bid seems like a steal. Take all of our money because this one is a proper gem.