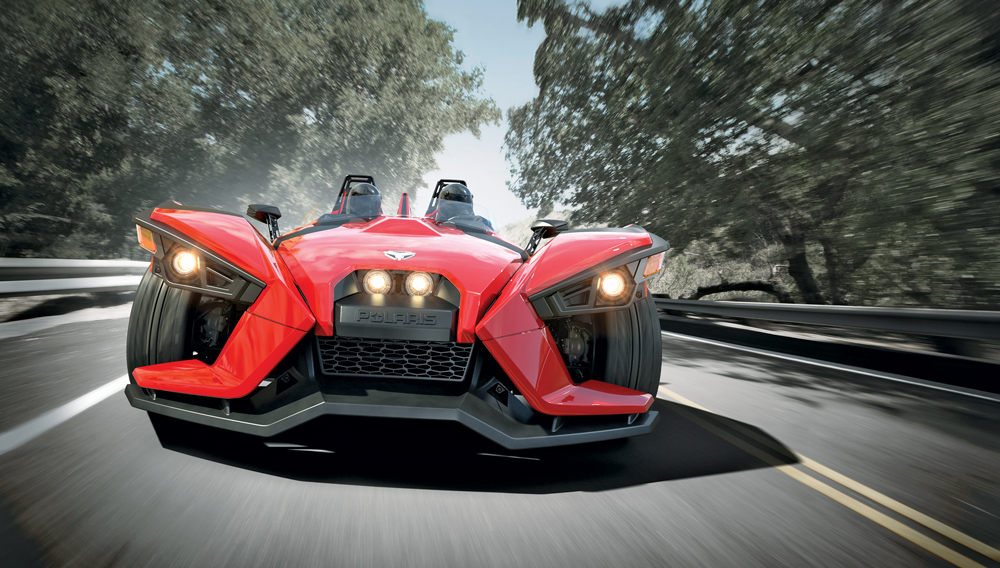 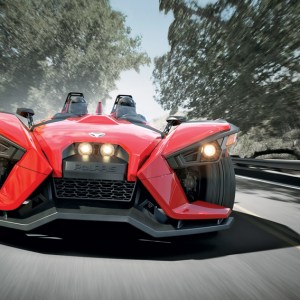 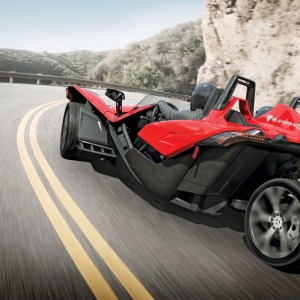 Polaris launches the Slingshot, its high-powered take on the trike.

The trike has come a long way since 1885, when Karl Benz introduced what is widely considered the first automobile, the three-wheeled, 0.75 hp Benz Patent Motor Car. While that vehicle resembled a horse buggy, the trikes of today blur the lines between sports cars and sport bikes, and compete with them for the attention of adrenaline seekers. Last fall, Polaris, the 60-year-old Minnesota-based company best known for snowmobiles and ATVs, joined the trike action with the Slingshot, which, like the Campagna T-Rex and the Morgan 3 Wheeler, has two wheels in front and one in back.

Classified as a motorcycle (some states require the driver to have a motorcycle license and wear a helmet), the Slingshot drives more like a four-wheeler than a two-wheeler. Instead of straddling the Slingshot in tandem, the driver and passenger ride side by side in the open-air cockpit, sitting in bucket seats that, like the rest of the interior, are waterproof.

The 2.4-liter dual-overhead cam engine produces 173 hp and 166 ft lbs of torque at 4,700 rpm. The Slingshot weighs just 1,750 pounds (wet), so its power-to-weight ratio is impressive. Indeed, it is better than those of four of this year’s Car of the Year competitors, including the Bentley Continental GT V8 S and the Mercedes-Benz S500 4-Matic Coupe. The Slingshot’s zero-to-60-mph time has been estimated at 5 seconds and its top speed at 130 mph. The steel space-frame chassis sits just 5 inches off the ground, which gives occupants the sensation that the vehicle is moving even faster and delivers an adrenaline rush that few cars can provide.

The Slingshot stands just over 4 feet tall, and the track width for the front wheels is nearly 6 feet. The battery is mounted low, just behind the seats, and the engine sits just aft of the front axle. The dimensions and configuration, combined with the proximity to the ground, give the Slingshot a balanced and stable ride. This was evident during test-drives of the $20,000 base Slingshot and the $24,000 SL model on the roads that wind through the hills of Malibu, Calif.

The two models did an equally good job of absorbing road chatter thanks to the double-wishbone front suspension and sway bar. However, the SL, which has larger tires and other upgrades, was able to navigate the turns with greater speed. The steering on both models exhibited more float than expected, but the gears of the 5-speed manual transmission were easy to find, and the clutch was smooth.

In addition to larger tires, the SL model also comes with a windscreen, a backup camera, USB ports, Bluetooth connectivity, and a six-speaker audio system.