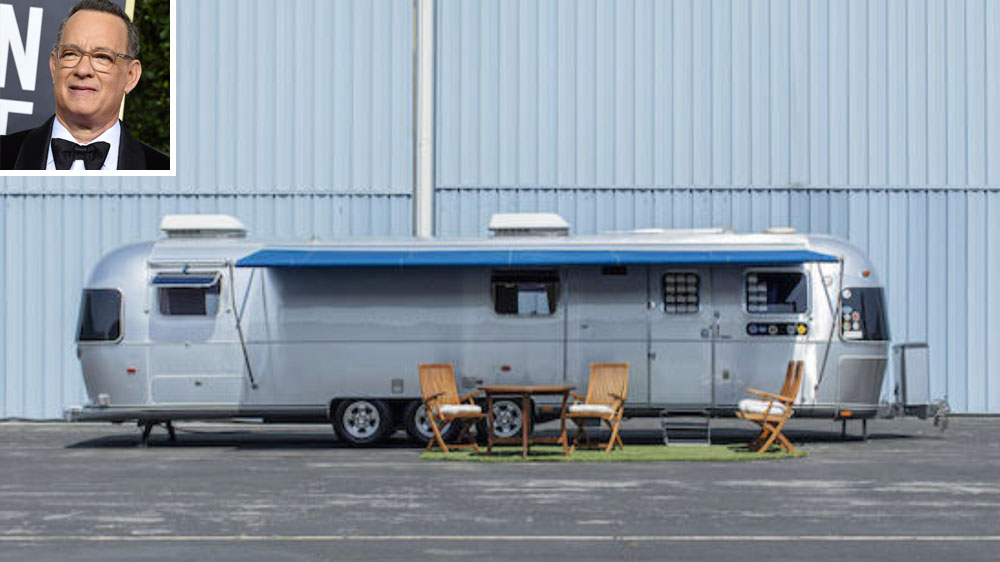 From 1993 to 2017, Tom Hanks’s home away from home while on set was his custom Airstream trailer. Now, the iconic camper is heading to auction.

Bonhams will offer the 65-year-old actor’s 1992 Model 34 Limited Excella travel trailer as part of its annual Quail’s Lodge Auction in Carmel, California next month. The two-time-Oscar winner did everything to make sure his Airstream really was a home on wheels, even going so far as to have it equipped with a cozy fireplace.

Tired of staying in generic movie set trailers in the early ‘90s, Hanks decided to commission his own aluminum-covered Airstream. The resulting trailer, which was used for movies ranging from 1993’s Sleepless in Seattle to 2017’s The Circle, came with a built-in kitchen and bathroom, and nothing else. The rest was filled with furniture and amenities of Hanks’s choosing, including a full-size sofa with no legs so that it could fit through the door, a small (artificial) fireplace, a bed and a patio set for lounging outside.

“I got it in the days when movies moved slower” Hanks recently told Bonhams. “I had spent too much time in regular trailers with ugly décor and horribly uncomfortable furniture, so I decided to buy a brand-new Airstream shell with an interior made to my own request.”

All of the hand-picked furniture comes with the Airstream, according to the auction listing. Also included are plenty of several mementos, like stickers from the various locations Hanks traveled to while filming, as well as memorabilia from some of his better-known films, like a mug signed by the cast of Apollo 13. And if anyone ever doubts that the Forrest Gump star previously owned the trailer, Hanks even saw fit to sign one of its faux-wood panels.

Hanks’s Airstream is scheduled to hit the block on Friday, August 13. The trailer is being sold without reserve, but the auction house still expects it to hammer down for between $150,000 and $250,000. If the gavel price falls in the middle of that estimate, that would mean the three-decade-old trailer will have sold for twice as much as a brand-new Flying Cloud 30FB Office model. That’s quite the premium, but for those looking to live like Hanks, it might be a bargain.