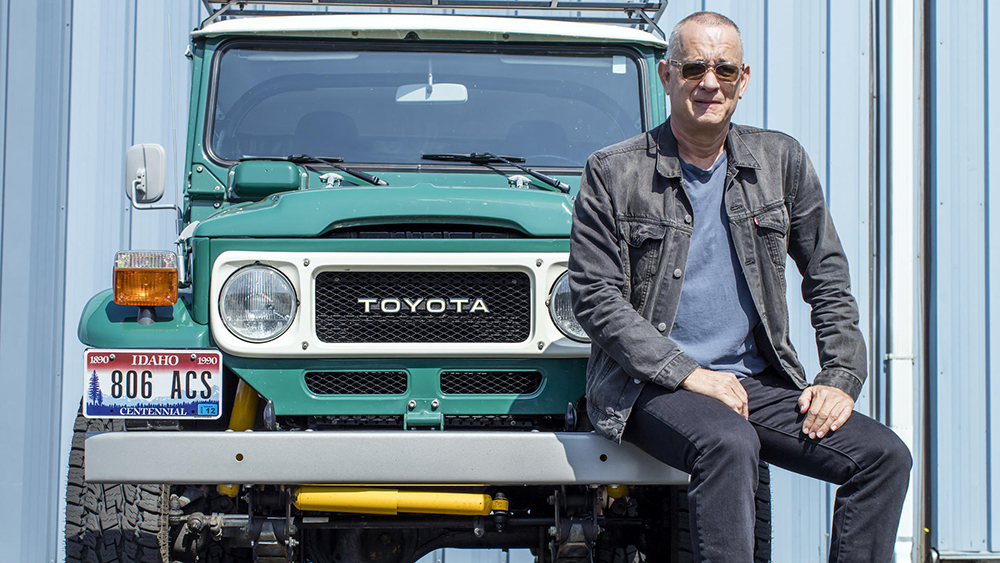 First it was his Airstream, now it’s his Land Cruiser. Another iconic vehicle from Tom Hanks’s collection is heading to auction.

The nicest guy in Hollywood commissioned the classic FJ40 for off-roading in the wilderness. It’s also been signed by the legendary 65-year-old actor himself. It will go under the gavel without reserve at the Bonhams Quail Lodge Auction on August 13, where it’s expected to fetch between $75,000 and $125,000.

The custom Cruiser sports a Rustic Green exterior with a white roof and has been tricked out to the nth degree. The model’s signature straight-six has been swapped for a General Motors L35 4.3-litre Vortec V-6 which can churn out 180 hp. The engine is mated to a 5-speed manual transmission that also comes courtesy of GM. This new setup meets California smog requirements, so the car can be legally driven throughout the Golden State.

To give true go-anywhere capability, the stock ride height has been beefed up by Emu shocks and Warn hubs. The one-off has also been fitted with a set of chrome wheels and thick Toyo Open Country 31 x 10.50 R 15LT tires that promise to make mincemeat of any terrain. For added comfort, the four-wheel drive also packs power brakes and power steering.

As for the cabin, a pair of Porsche’s power-operated high back seats have been added, though the originals are also included with the sale if you wish to refit. There are also moedern creature comforts, such as A/C and a Sony stereo with extra speakers in the rear.

The classic car has been signed by Hanks.  Bonhams

Rightfully so, Hanks put his prized FJ40 through its paces. The interior is lightly used and the chassis has backcountry miles on it, according to the auction house. It’s designed for off-roading, after all.

“This FJ40 is ready for its next owner to take on their favorite trails in a well-built FJ40 Land Cruiser,” Bonhams said in a statement.

Collectors and cinephiles will also have the chance to acquire the Academy Award-winning actor’s custom Airstream trailer next month. Bonhams will auction the camper, which was Hanks’s on-set home from 1993 to 2017, come August 13 and it’s expected to hammer for between $150,000 and $250,000.