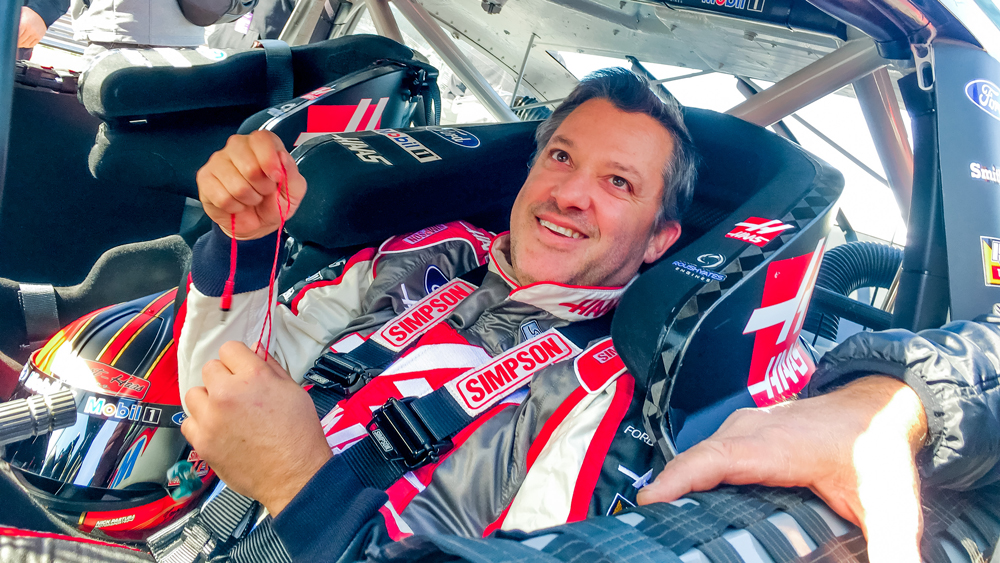 On February 22, 1959, the first running of the Daytona 500 debuted the massive Daytona International Speedway, in Daytona Beach, Fla., and elevated the city’s fabled motorsport contest from the sandy shoreline to a level of prominence still unmatched by any other NASCAR event today. This Sunday, the 64th edition of the annual competition will take place with a field of 40 drivers, all aiming to finish first after 200 laps on the 2.5-mile track.

Assisting Fox Sports with its coverage of the event this year will be household name Tony Stewart, a Hall of Fame driver, known to his legion of fans as “Smoke,” and the owner of four different teams that will battle it out at the 2022 Daytona 500, which kicks off the season for the NASCAR Cup Series. Prior to the weekend, the newly married Stewart shares with Robb Report what it feels like to be behind a microphone in the broadcast booth rather than behind the wheel, gives some insight into the new race team started with his wife and explains why he’s driven to give back.

Tony Stewart being inducted into the NASCAR Hall of Fame in 2020.  Photo by Jared C. Tilton/Getty Images, courtesy of True Speed Communication.

You’ll be helping Fox Sports cover the Daytona 500. Has the transition from racer to broadcaster been difficult?

I don’t think it’s hard to be in there [the booth]. I’ve listened to Jeff Gordon and Dale [Earnhardt] Jr. answer a similar question, and like Dale has said, there’s a point in your life when you sit there and say, “I don’t want to have to take that chance anymore.” As much as I love winning races, the Daytona 500 is so unpredictable and so many things are out of your control and can get you in a wreck pretty easy. And it’s not about getting in a wreck, the cars are safer than they’ve ever been. You’re not worried about getting hurt, just about getting taken out of the race.

What is your objective in the booth?

What I add in the booth is hopefully the driver’s perspective and what the drivers are thinking at different points during the race. Are they antsy and a little more aggressive? Do they like where they’re at in the field and content to take it easy and get to the next fuel stop? A lot of times the fans think they know what’s going on from what’s on TV, but having that driver’s perspective adds to it, something to make them go, “Wow, I never thought of it that way.” That’s what we add, value-wise.

From right: In a broadcast booth, Tony Stewart poses with musician Blake Shelton along with Clint Boyer and Mike Joy of Fox Sports.  Photo by Frank Micelotta/PictureGroup, courtesy of True Speed Communication.

What else is on your plate this weekend?

It’s overflowing. I was asked if I could do more of the pre-race as well, so I’m not exactly sure what it all entails and how much time that will be, but, obviously, I will be there the entire day. It sounds like I’ll l have a lot more responsibility than just being in the booth for that race. But it’s definitely an interesting dynamic, for sure. We’re going to have TSR, our NHRA drag racing team, making its debut at Pomona [California] the same day. So, I have four cars racing on Sunday in Daytona, two cars racing in Pomona and, on top of that, I’m in the booth with Fox. I don’t know if there’s any more I could do that day.

Why is the Daytona 500 so special?

It’s the biggest stock car race of the calendar year, no different than the Indianapolis 500 for IndyCar and the 24 hours of Le Mans for endurance. And it happens to be the opening race of the season. That’s part of what makes it so big. But then there’s the prestige. Some 70-odd years ago they were racing on the beach at Daytona. You made two 90-degree corners and you’re running down an asphalt road, then did the same thing at the other end—two 90-degree corners then came down the beach. To think where it started and how NASCAR has grown into what it is today shows how special the sport really is.

Stewart winning a qualifier for the 2007 Daytona 500.  Photo by AP Photo/Chris O'Meara.

What standout memories do you have from competing in the race?

Unfortunately, they are of the ones that got away. I was never able to win a Daytona 500, and we were supposed to a couple of times. But, you know, there’s getting passed on the backstretch by Ryan Newman one year [2008]. And there was the year [2007] that Kurt Busch and I were the two best cars in the field, and I had a speeding penalty at one point. I had to work my way up from the back and then got a little loose in front of him. He had nowhere to go and got into the back of us, and it took both of us out. It’s the ones where you knew you had a legitimate opportunity and couldn’t capitalize on it.

You are the only driver to win a championship in both IndyCar and NASCAR. Why is that crossover so difficult?

I think it’s because the cars are just on opposite ends of the spectrum in motorsports. I mean, a stock car is 3,500 pounds and has a much narrower tire than the IndyCar does, while an IndyCar is half the weight and has two to three times more downforce than a stock car. Everything about the cars is extremely different. Back in the 1960’s, ‘70’s and even ‘80’s, drivers would venture back and forth between different forms of motorsports. Now, in this era, that’s a dying art.

You’re starting to see some of the younger guys in NASCAR dabble in dirt track racing, guys like Kyle Larson, Christopher Bell, Alex Bowman and Chase Elliott, but I was the only one that was doing that in the early 2000s. It wasn’t frowned on by NASCAR, but Joe Gibbs, who I drove for, was not a fan of it at all. And to his point, it’s like NBA or NFL players in pickup games getting hurt. So you just don’t see drivers that bounce back and forth like that anymore, especially when it comes to marquee events in IndyCar and NASCAR.

You have obviously enjoyed great success and the lifestyle it affords. What’s your definition of luxury?

I honestly feel it’s at the end of a long race weekend, when I go to the airport and climb on my own plane, skipping traffic and the TSA checkpoint, then have a beverage with my seat back. It’s having the ability to travel, more than anything. And with the motor coaches that we have, it’s not having to check in to hotel rooms and the ability to pack much lighter for trips. That’s definitely luxury in my eyes.

So, you’re a fan of private aviation. What aircraft do you own?

I’m a huge fan. We have a [Cessna] Citation CJ4 now, and a CJ3 before that. Without the private plane, we would not be able to do all the things that we are doing. I was trying to get my [pilot’s] license but got so busy that I couldn’t focus on the book work and the hours I needed flying. But I love aviation and have sat up with my pilot quite a bit.

The driver known as “Smoke” to his fans.  Photo: Courtesy of True Speed Communication.

You took an interesting turn when it comes to collecting. Tell us about that.

I assume you’re talking about my helmet collection. I started in 2000 and traded my first helmet with Elliott Sadler; we were both rookies together in 1999. I then started trading with other drivers. It’s one of those scenarios where you really can’t just go buy race car drivers’ helmets—they’re few and far between. And a lot keep their helmets, or are very tight with them. I’ve had the ability to trade with my peers and, through the years, been able to buy collections when they have come for sale. I’m up to almost 360 helmets now.

Which are your favorites?

Probably my favorite is the one that Jimmie Johnson wore when he won his seventh NASCAR Cup Series Championship. The night that he won was the same night as my last race in the Cup Series. I went to congratulate him and he literally had someone reach in the car, grab the helmet and hand it to me, there in victory lane. And Carl Edwards gave me the helmet he had on the night we battled for the championship in 2011. I also have one from the late Paul Newman and one from Dale Earnhardt Sr. that he and I traded for after a Southern 500 in Darlington. I’ve had the honor to be friends with, and to trade helmets with, some pretty neat people in motorsports history.

Shannon Spake, host of FS1’s RaceHub, being given a tour of Stewart’s helmet collection.  Photo: Courtesy of True Speed Communication.

Do you have a holy-grail car?

Smokey and the Bandit has been my favorite movie since I was a child, and I have a 1979 Trans Am that I love. And I’ll be honest, I’ve never driven it. I’ve pulled it around and moved it to a different part of my shop, but I’m so scared to put a scratch on that car. That’s my favorite, but I don’t know how you can get away from a Ferrari F40—that’s the holy grail for everybody.

You just started a new race team with your wife, drag racer Leah Pruett. How many teams do you own and what’s the biggest challenge of overseeing so many?

Leah and I got married the Sunday before Thanksgiving this past year and started Tony Stewart Racing, or TSR. It’s in the NHRA Camping World Drag Racing Series. We also have the four NASCAR Cup Series teams, an Xfinity Series team, a World of Outlaws Sprint Car team and three cars that race in the All Star Circuit of Champions three-quarter midget series. The key to all of this is to just have good people and, from the ownership standpoint, make sure I give my drivers the best opportunity to win races and contend for championships.

Tell us about the Tony Stewart Foundation.

There are three main categories that our Tony Stewart Foundation supports, and those are children’s charities, animal charities and injured drivers. I have a lot of friends that are still in the short-track industry and I know what that means to be able to support them. I was just as guilty as everybody else in that realm, in that everything that we made with racing and our side jobs we put into our race cars. So a lot of the drivers don’t have adequate insurance and disability coverage. If something happens, and they have a substantial injury, a lot of times they are in a very bad situation.

The racer and team owner with his dogs Max and Mia.  Photo by Andrew Coppley, courtesy of True Speed Communication.

The board of the foundation comprises my mother, father and sister, and it’s something that we’re all very passionate about doing together. When I got into NASCAR, we learned very early the value of giving back to the communities. That’s something I’m very proud of on the NASCAR side. It leads by example and does a great job at teaching all of us the importance of giving back and supporting outside charities.