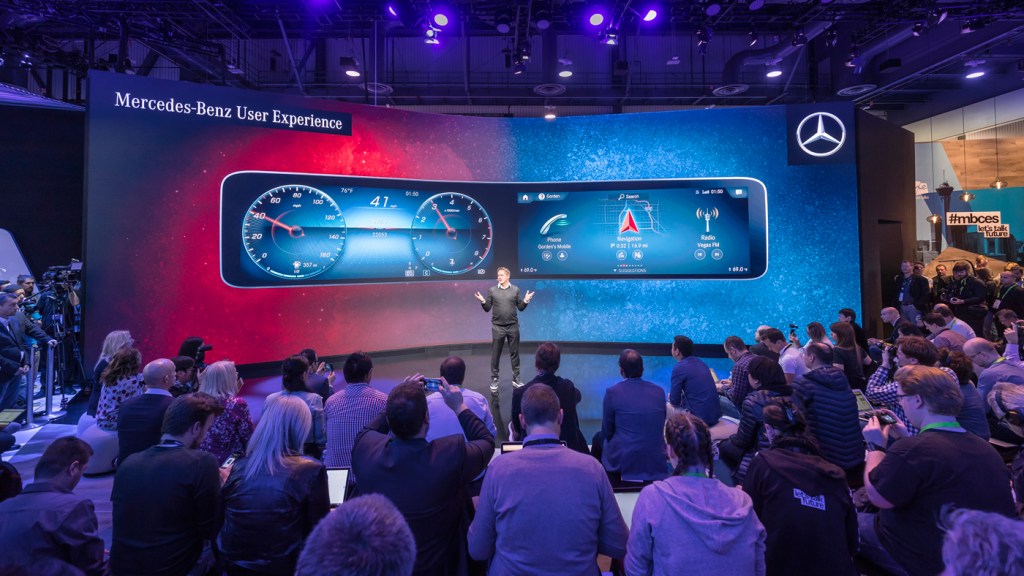 When I started covering the Consumer Electronics Show (CES) in 2005, the automotive exhibits were limited to flashing license plate frames, aftermarket speakers, and in-car adapter kits for iPods (yes, iPods). Major car manufacturers didn’t know what CES was, or if they did, they didn’t seem to care. Then, in a few short years, technology and the automotive industry became inextricably intertwined. Nearly every car company scrambled to make a showing at CES. Automotive executives gave keynote speeches. They financed big, flashy stands on the floor of the Las Vegas Convention Center, shoehorned between the big-screen TVs and the latest refrigerators.

This year, there was still plenty of automotive news to share at CES, which ended on January 12. Unlike last year’s event, however, which was packed with concept cars and vehicle debuts, the latest show has shifted to more of a showcase for how we’ll use our cars in the future—that geeky, intangible stuff that delights computer nerds but often anesthetizes traditional car buffs (for the latter, there’s the North American International Auto Show in Detroit next week). Although these innovations can’t often be conveyed in a few pretty pictures, they are significant nonetheless. Some of the highlights include:

Ferrari: Intel announced it would bring its artificial intelligence technology to the Ferrari Challenge of North America racing series, which includes using drones to analyze driving performance and enhance the spectator experience.

A race in the Ferrari Challenge of North America series.  Photo: Courtesy Ferrari.

A hands-on introduction to new widescreen displays and an AI-enhanced interface from Mercedes-Benz.  Photo: Courtesy Mercedes-Benz.

BMW: The shopping experience at BMW dealerships will soon be augmented with virtual reality via VR@Retail, a new tool that allows potential buyers to configure and explore vehicles more in-depth. The tool is on display at CES with BMW’s new X2 compact SUV.

A BMW display at the 2018 Consumer Electronics Show in Las Vegas.  Photo by Larry W. Smith/EPA-EFE/REX/Shutterstock.

Volkswagen: Chip-maker NVIDIA announced it would provide its artificial intelligence and deep learning technologies to future Volkswagen vehicles (and likely, by extension, to VW Group’s other luxury brands such as Audi). This includes support for autonomous diving technologies as well as facial recognition, gesture controls, and voice recognition.

Inside the Volkswagen I.D. Buzz, an all-electric version of the MicroBus that includes the integration of artificial intelligence features from Nvidia.  Photo: Courtesy Volkswagen.

Byton: The startup, led by former BMW and Apple employees, hopes to be the next Tesla competitor with a new electric “smart” car. Sporting an SUV-type body and a whopping 49-inch widescreen display, the company plans to make cars only for the Chinese market. Time will tell whether Byton will succeed or go the way of Faraday Future, whose financial struggles have been well documented.

Without actual products to show, some question whether automakers will continue to invest millions of dollars at CES in the coming years, especially when it’s so close to the Detroit Auto Show, traditionally one of the most important venues for new vehicle debuts.

John Krafcik, who’s in the unique position of having served in high-level positions in both the automotive and technology sectors (he’s former President and CEO of Hyundai Motor America and the current CEO of Waymo, Google’s autonomous car spinoff), says CES isn’t going away, but agrees its purpose is shifting.

“It remains a good place for OEMs to announce partnerships or features to integrate into the tech world, but it could be that its time has passed to introduce all-new vehicles,” says Krafcik.

As for those flashing license plate frames? They’re still there, much to my chagrin. But at least those iPod plugs aren’t coming back.