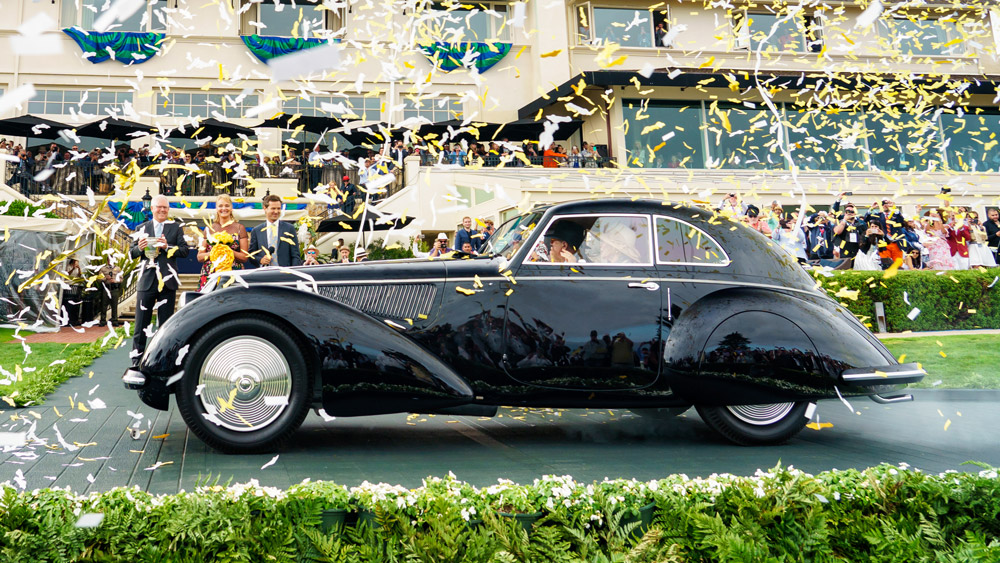 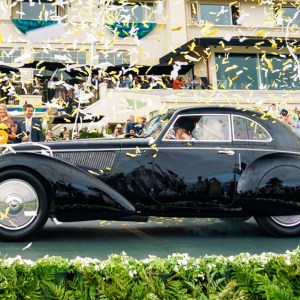 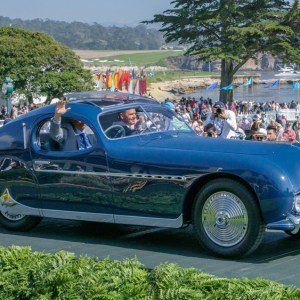 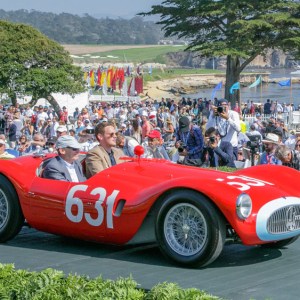 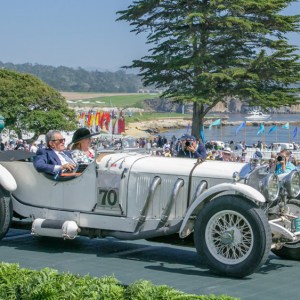 The crowning glory of Monterey Car Week is the Pebble Beach Concours d’Elegance, held this year for the 68th time on the 18th fairway of the famed Pebble Beach Golf Course. Chaired by renowned automobile collector Sandra Button and judged by some of the world’s foremost classic car experts, the councours is a must-see for every automotive enthusiast. Among the 2018 assemblage of pre- and post-war beauties, we saw special classes for the Italian marque Osca, the short-lived but innovative Tucker, Eisenhower-era convertibles, and motorcars of the Raj. Here are some of the winners.

A Best-of-Show finalist, winner of the Postwar Touring class, and recipient of the Vitesse-Elegance Trophy, this Fastback Coupé is one of 26 surviving examples of the “Grand Sport” body style. Also known as the GS, these cars were shortened versions of the Talbot Lago Record T26 and were some of the world’s most powerful production cars of the time.

This Fastback Coupé is one of 26 surviving examples of the “Grand Sport” body style.  Photo by Kimball Studios, courtesy of Pebble Beach Concours d'Elegance.

They were originally delivered as bare chassis, requiring customers to commission their own bespoke coachwork. Joseph Figoni built this example for the 1948 Paris Auto Salon, and its zipper-like string of horizontal chrome strips above the center headlight is a nod to its first owner, Mr. Fayolle, who was known as the “Zipper King.”

Only 52 examples were built of the Maserati A6GCS, 48 of which were spyders. The 170 hp A6GCS has a modified, more powerful version of the straight-6 engine found in the A6 (the name given to a series of grand tourers and racing cars that revitalized the brand’s business in the early 1950s).

The Briggs-Cunningham Trophy is awarded to the most exciting open-top example.  Photo by Kimball Studios, courtesy of Pebble Beach Concours d'Elegance.

This car was bodied by Carrozzeria Frua for the amateur Italian race driver Siro Sbraci in 1954 and was raced in the 1955 Mille Miglia, where it finished third in its class and 12th place overall. This year at Pebble Beach, it was named winner of the Briggs-Cunningham Trophy (awarded to the most exciting open-top vehicle) and second-in-class for the Postwar Sports category.

Winner of the Prewar Preservation Class and the Mercedes-Benz Star of Excellence Award, this car was originally built for German racing driver Rudolf Caracciola, who drove it to several racing victories, including the 1930 Irish Grand Prix, the 1931 German Grand Prix, and the 1931 Mille Miglia. Later, Earl Francis Howe raced it in the United Kingdom and achieved five first-place finishes.

The 7.1-liter, 6-cylinder supercharged motor made up to 200 bhp when new and could achieve speeds of more than 118 mph, easily beating many of its competitors. Its entry into the preservation class means the car has had very little or no restoration, and retains most all of its original parts and finishes.

There were several gorgeous examples of Ferrari’s iconic 250 GT at the 2018 Pebble Beach Concours d’Elegance, but this car was stunning enough to win its class in the Ferrari Grand Touring category.

The 250 GT Cabriolet, bodied by Pinin Farina, was Ferrari’s first convertible, with only about 30 “Series 1” models produced between 1957 and the end of 1962. They feature tubular steel frames and are powered by Ferrari’s 3-liter V-12. The example honored was first owned by wealthy playboy and amateur racer Porfirio Rubirosa, who was also the fifth ex-husband of Woolworth heiress Barbara Hutton.

Several spectators predicted this fine example of Italian craftsmanship would end up at the top of the judge’s list, and indeed it did. The Alfa Romeo 8C derives its name from the straight-8 engine that sits under the hood. This example, owned by David Sydorick of Beverly Hills, Calif., was shown at the 1938 Berlin Motor Show and differs from later 8C models due to its more steeply raked grille and the absence of running boards.

Confetti rains on David Sydorick and his 1937 Alfa Romeo 8C 2900B Touring Berlinetta after it was named Best of Show.

In addition to Best of Show, the car racked up two other accolades: the Charles A. Chayne Trophy (for car with most advanced engineering for its era) and the J. B. & Dorothy Nethercutt Most Elegant Closed Car award.