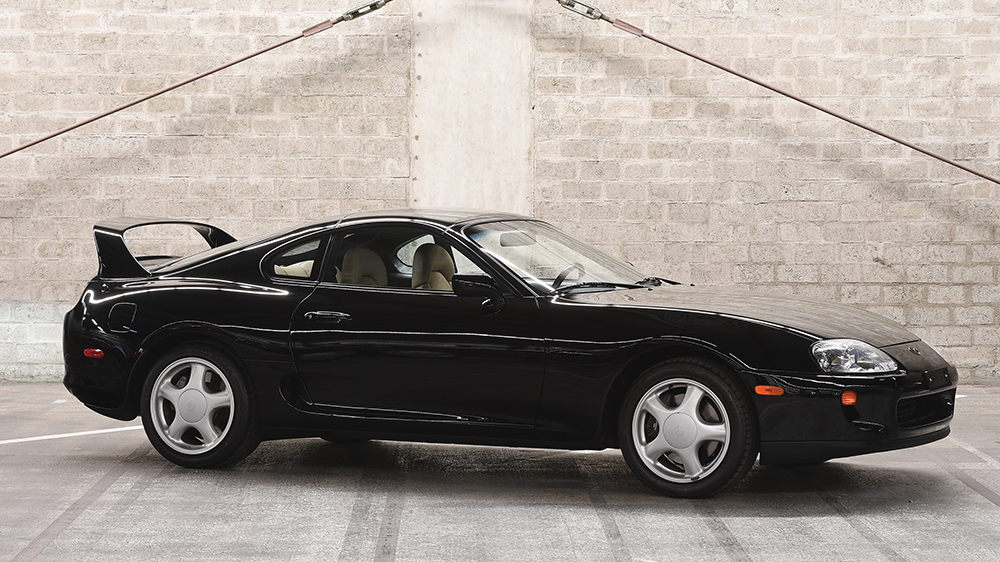 In January of this year, auction site Bring a Trailer listed a 7,000-mile Toyota Supra. Because the twin-turbo Supra is such an easy car to modify and subsequently hoon, it’s uncommon to see one with such low mileage that remains in its original factory spec. Still, plenty of eyebrows raised when a Chicago Toyota dealer forked over $121,000 for the coupe. And this month, an 11,200-mile twin puffer Supra has been sold by RM Sotheby’s at the Amelia Island Concours auction for a positively staggering $173,600.

That price includes the buyer fees, and said buyer is getting a 1994 targa roof model that’s black with a tan interior and a six-speed manual transmission, and it looks squeaky clean. The car, per RM Sotheby’s, was first sold as new in Illinois, where it racked up 6,000 miles before it decamped for Europe in 2018, where it accrued the rest of its miles in Switzerland. The sale at Amelia sets a new record for Supras, and if the trend is inching these MkIV vehicles north at astronomical rates, it’ll be interesting to see just how high bidders will go.

The Youngtimer Collection is an enormous singular collection of ’80s and ’90s cars that RM Sotheby’s will be selling off in dribs and drabs at its various auctions throughout the year. There’s a ton of rare European and Japanese sports cars included in the herd, many with impressively low mileage.

The Youngtimer Collection, in particular, has raised quite a bit of interest since its announcement back in December 2018. The term “Youngtimer” refers to what will be a future classic. Comprised of rare and low-mileage European and Japanese sports cars, the collection has been slated to be sold off over the course of four auctions. The first batch was offered during Retromobile and achieved outstanding results, including a 1994 BMW Alpina B12 that hammered for $234,540, a 1985 Audi Quattro that fetched $87,950, and a Mercedes-Benz E 500 Limited from 1994 that went for $97,735. Both the Audi and the Mercedes sold for nearly double the presale estimates.