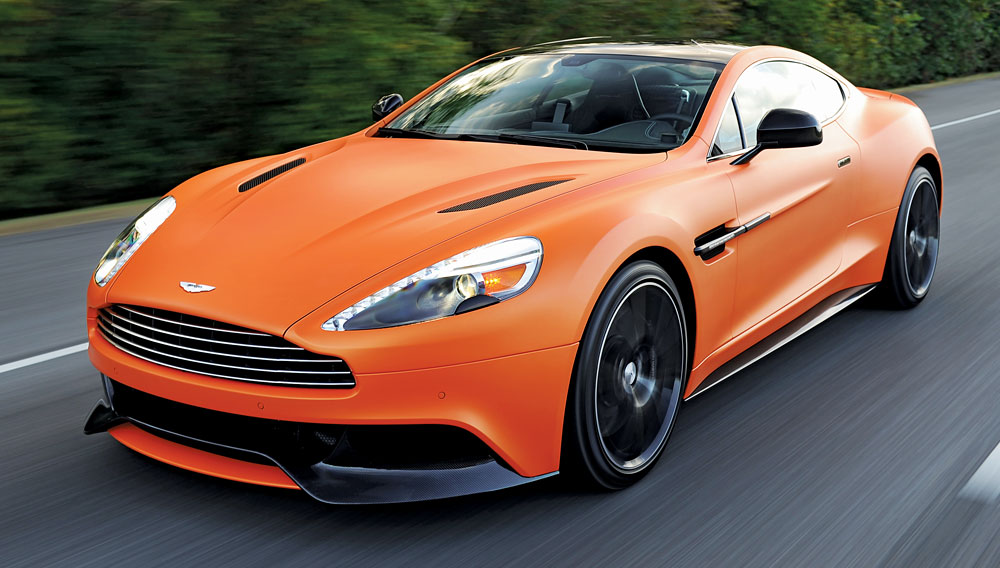 Aston Martin has been criticized for producing a lineup of look-alike sports cars and grand tourers. Detractors contend that it is difficult to distinguish between the shapes—as well as the purposes—of the Vantage, DB9, Virage, and DBS. The Rapide may stand out because of its four doors, but it shares much of its bodywork with the DB9.

The all-new version of the Vanquish, a model that was discontinued in 2007 after a seven-year run, may quell some of that criticism. While the car is not a radical departure for Aston Martin, it does feature styling flourishes from the limited-edition One-77 and the now-discontinued Virage, and it displays much more flair than the understated DBS, which it is replacing as the brand’s flagship. As for the Vanquish’s purpose, drivers will find that it is well suited to fast dashes but even better equipped for long hauls.

The Vanquish has a base price of $280,000, and optional upgrades can push that figure beyond $300,000. It is available in a two-seat or 2+2 configuration, although the latter’s rear seats will accommodate only the tiniest passengers.

The face of the Vanquish—specifically the grille with the droopy corners—is unmistakably that of an Aston Martin, but the sharp, shark-evoking nose is distinct, as are the prominent carbon-fiber splitters that wrap around the corners of the front end. The shape of the Vanquish’s body is more wasplike than those of the other Aston Martin models, with a more pinched waist and a pronounced character line that rises as it approaches the rear. Beefy 20-inch Pirelli P Zero tires on handsome alloys fill the wheel arches. The carbon-fiber black sill extensions and rear diffuser serve as reminders that all of the car’s major body panels are made of the material.

The Vanquish employs an updated version of the architecture that underpins all Aston Martins; the new chassis is 10 percent lighter and 25 percent stiffer than the previous one. The car is powered by a revamped 6-liter V-12 that produces 565 hp and 457 ft lbs of torque. Aston says this new AM11 engine enables the Vanquish to accelerate from zero to 60 mph in 4 seconds and reach a top speed of 183 mph.

Aston Martin offers the Vanquish with only a 6-speed paddle-shift automatic transmission—no manual option. This revised version of the DBS’s gearbox is rear-mounted to provide a 50/50 front-to-rear weight distribution. It delivers rev-matched downshift blips and quicker gear changes, and has a launch-control function.

Aston Martin previewed the Vanquish last fall just outside New Orleans, on the snaking 2.75-mile track at the newly opened NOLA Motorsports Park. There the car immediately demonstrated its aural appeal, once the crystal key fob was inserted into the push-button start system in the dash. (Aston Martin calls the key the ECU, for “emotional control unit.”) The exhaust sounds different from that of the DBS; it seems to flow more freely from the engine. When sport mode is engaged, a rich baritone note escapes.

In comfort mode, and with the transmission shifting on its own, the car offers well-controlled body movements, a firm but not harsh ride, and quick steering. The response to steering-wheel input is instant and results in razor-sharp turn-in. Even when the Vanquish is in comfort mode, the suspension automatically stiffens when the car is pushed hard, and the transmission will throw a perfectly timed throttle-blip downshift.

Sport mode remaps the throttle for even faster responses and sharper gear changes. Pulling on the paddles engages the sequential manual mode and allows the driver to manually hold a gear to redline. Depressing the suspension control switch employs a stiffer sport mode.

In the track setting, the suspension minimizes body roll and cushions the impact of bumps and curbing in the road surprisingly well. On the NOLA track, when intentionally steered into the raised red-and-white FIA curbing, the Vanquish cornered absolutely flat, and though the suspension was set to firm, it soaked up the hit instead of allowing the car to rebound off the curb. The Vanquish’s ability to finesse suspension compliance with tautness—along with its low center of gravity, quick steering, and perfect weight distribution—makes it an easy car to push hard.

Launch control, engaged by pressing a button mounted on the center stack, catapults the Vanquish with minimal tire slip. The system handles the one-two upshift and then leaves the rest to the driver. It is easy to hit the limiter in third gear because the engine is so free revving. The driver can tug on the left paddle to preselect a lower gear and then concentrate on guiding the car through a corner. The speed-sensing transmission waits until it reaches the proper threshold and then automatically engages the lower gear. If necessary, the carbon-ceramic brakes’ 6-piston front calipers and 4-piston rear calipers will provide tremendous stopping power.

The Vanquish is so well balanced that the driver will hardly notice when the traction-control system is engaged. A light on the dash indicates when the system is not on; when it is on, the system helps the car maintain its composure by either dabbing on a particular wheel’s brakes or reducing torque.

Capable as the Vanquish is on the racetrack, it is better appreciated as a grand tourer, thanks in part to a cabin equipped with a 1,000-watt Bang & Olufsen sound system, an onboard navigation system, heated seats, and haptic-feedback controls. The seats, the dash, and the headliner (as an optional upgrade from Alcantara) are covered in leather. The sport seats are supportive and yet as comfortable as club chairs. The cabin seems wider than that of the DBS, and the center console is lower. The twin-cockpit layout of the dash is similar to the DBS’s design, but it includes a few important upgrades, such as the (optional) squared-off sport steering wheel also found in the One-77. The thick, grippy wheel is clad in a combination of leather and Alcantara and contains controls for the adaptive suspension, the engine-management sport mode, and Bluetooth streaming. The cabin also includes the new Driver Information Module, which was adapted from the One-77. It provides a constant digital display of the vehicle’s speed and fuel range.

Overall, the detailing on the car is exquisite. From the trumpet-shaped exhaust tips to the tailored interior, British craftsmanship abounds. If this makes the Vanquish indistinguishable from the rest of the Aston Martin lineup, then so be it.