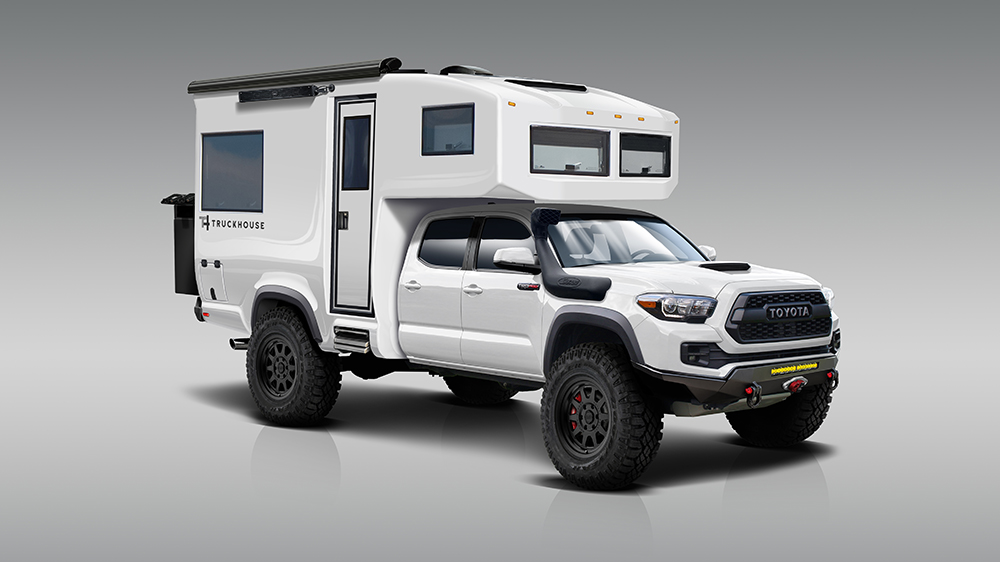 Even before Covid-19 interrupted most of our vacation plans for the foreseeable future, luxury campers and trailers had been experiencing something of a resurgence. Still, we’ve not seen one that combines performance, style and amenities quite like the TruckHouse BCT.

Unveiled on Wednesday, the Nevada company’s new camper is actually a Toyota Tacoma TRD Pro that’s been outfitted with everything you need for your next overlanding adventure, and then some. With mechanical upgrades, a carbon-fiber shell and a lavishly appointed interior, it should immediately make a name for itself on the off-roading landscape.

The BCT is built on Toyota’s top-of-the-line Tacoma. The double cab version of the popular truck is one of the more stylish on the market and is specifically designed for off-roading. But this isn’t just any old TRD Pro. It’s also been upgraded with a reinforced chassis, an Expedition long-travel suspension, re-geared differentials, a fully fabricated rear axle, rotary forged wheels and knobby, oversized all-terrain tires. The TRD Pro was already a capable 4×4, but now it’s even more ready to get down and dirty.

Of course, while its off-road upgrades are all but guaranteed to make the BCT plenty of fun to drive, its many creature comforts will also make it a vehicle you’ll be more than willing to spend a weekend, or longer, living out of. The TRD Pro’s usual truck bed has been replaced by a full-featured camper with an ultra-lightweight carbon fiber-reinforced, single-piece shell. Weighing just 500 pounds, the shell won’t affect the truck’s performance any but is also sturdy enough to guarantee safety and comfort.

Inside the TruckHouse BCT’s double cab

Despite its light weight, the camper is filled with everything you’ll need for a few days away from the city. There’s sleeping room for four adults, including a queen-size mattress in the cabover compartment. Other features include a fully equipped kitchen with a two-burner induction cooktop, a u-shaped rear dinette, a 32-inch LED TV, a wet bathroom with a shower and seven safari-style, dual-paned windows and an overhead skylight. The camper is powered by 500-amp hour lithium battery bank with a solar backup that’ll allow you to live off the grid when needed, as well as power the unit’s 12-volt air conditioning system and heated luxury woven vinyl floors when the weather takes a turn for the worse.

Of course, all those features come at a price. When the BCT goes on sale later this year after making its public debut at the 2021 Overland Expo Mountain West, it’s expected to start at $285,000, though a version with all possible add-ons may cost as much as $335,000.