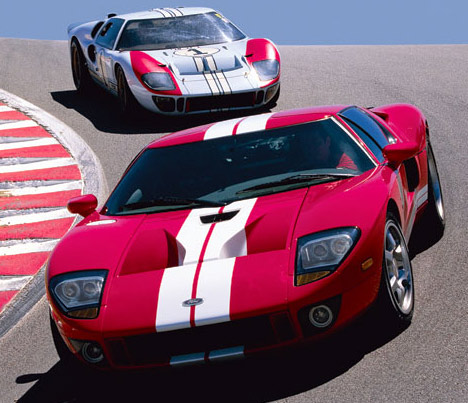 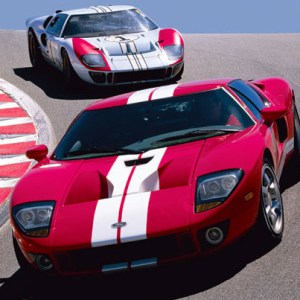 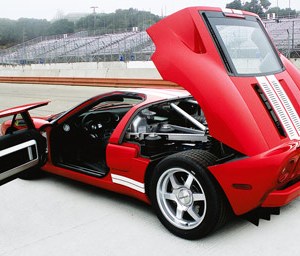 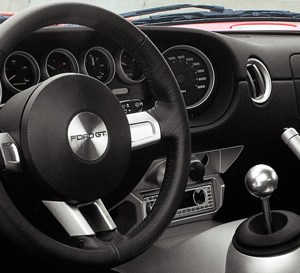 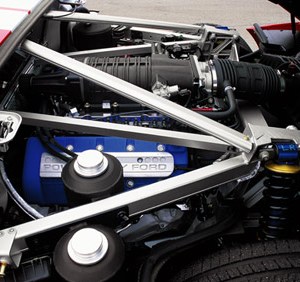 On a map, Turn Eight of Laguna Seca Raceway appears to be nothing more than a simple S-bend that can be disposed of with two quick flicks of the steering wheel. But when viewed in three dimensions through a windshield, Turn Eight of the Monterey, Calif., track is something else altogether. You approach the aptly named “Corkscrew” over a blind crest, braking heavily and downshifting a gear or two, make the initial leftward move with the steering wheel, then, without warning, seemingly plummet off the edge of the earth.

During the downward plunge, one so steep that it seems as though the car’s nose will bury itself in the pavement ahead, you must make a smooth transition from left to right while feeding in as much power as the tires can handle. Get it right in a capable car, and the few seconds spent here are sheer poetry. Get it wrong, and the minimum penalty is a dirty car and a red-faced driver. Either way, Turn Eight is a memorable experience. In the Ford GT, it is unforgettable.

G forces thrust you forward into the seat belt, then yank you to the right and forward again as the GT completes the first segment of the turn and its nose aims down. For a fraction of a second, all the forces acting on you and the car seem equalized. Then you are shoved back and to the left as you accelerate and the GT behaves exactly as you wish. As you set up the car for the next turn, you realize that the GT could have handled Turn Eight at a much higher speed. And so could you.

For its $149,000 estimated price, the GT does not offer much in the way of accoutrements: no electronic driver’s aids, no paddle shifters. Its minimalism, however, is its beauty. Aside from ABS brakes, there are no other electronic watchdogs to keep you from lighting up those wide Goodyears, or to save you from the consequences of wantonly violating the laws of physics. You had better know how to execute smooth gear changes, because instead of paddles or buttons, the GT offers a traditional clutch pedal and shift lever.

By 21st-century standards, the decision to omit these devices may seem primitive—or even dangerous. Think again. We are witnessing the rebirth of the honest supercar, a brilliant driver’s machine capable of setting a stunningly fast pace over any challenging stretch of road or racetrack. The supercharged 5.4-liter, 500-hp V-8 propels the car from zero to 60 in 3.9 seconds. Eight seconds later, the GT passes the quarter-mile mark at 122 mph en route to a top speed of 190 mph. From 60 mph, the GT can be brought to a halt in a mere 105 feet.

There are other mid- or rear-engine speedsters (the Ferrari 360 Modena, the Lamborghini Gallardo, the Porsche 911 Turbo) with similar configurations and aspirations, boasting a surfeit of power, eye-catching looks, and price tags in the mid- to upper-$100,000 range. The builders of these machines have equipped their vehicles with electronic aids that take some of the driving decisions—and some of the pleasure—out of the driver’s hands. Lay a too-heavy foot on the gas, and a computer will correct the resulting wheelspin. Push the limits of adhesion, and a computer will step in to slow down the car. This, we are told, makes these cars safer and faster. But these solid-state governesses can also make driving at anything less than a flat-out pace an uninspiring, dull-as-dishwater experience.

The GT eschews such devices. On the track, it will show its taillights at the other machines in its class, even when their pilots turn off the electronic aids, as is the custom for achieving the fastest lap times. Better still, this competence carries over to highway cruising, where the GT keeps its driver happy while consuming miles at more conservative speeds. However, it is a safe bet that most of the 4,000 purchasers who will be taking delivery of their GTs beginning next spring will want to reserve track time; anyone who has the opportunity to drive the car will understand why.

Besides, the GT is so thoughtfully designed and constructed that electronic aids are not required, and drivers do not need race-ready superstar credentials to enjoy the car. On a winding road at relatively modest speeds, steering, gear shifting, braking, and accelerating are intuitive actions. Credit the best control placement you will find in any supercar, feedback levels that are just right, and a very firm but comfortable ride. The GT is one of those rare cars that responds to driver commands in the same manner at 50 mph as it does at far greater velocities.

Conceptually and aesthetically, the new GT barely strays from the original racer that carried the Ford name into competition nearly four decades ago. After a monumental effort, the result was four victories in the 24 Hours of Le Mans and a host of triumphs elsewhere. Because it closely resembles its predecessor, it is only natural that the new GT evokes vivid memories of the past.

This is strictly intentional. After attempts to develop a completely new shape for the 21st-century Ford GT, the designers were instructed to leave well enough alone. They did, resisting the urge to add unnecessary styling frills while enlarging the timeless 1966 GT design for practical reasons involving interior space, crash­worthiness, and various regulatory demands. Several modern touches emerged from the design process: A subtle crease follows the upper body line from front to back, and a strange, somewhat inappropriate semipastel hue has been applied to the “Ford Blue” camshaft covers on the engine. The former does not detract very much, and the latter can be repainted.

Trivial details aside, the new GT is a stunning visual success. Body designs that evolve from the packaging and aerodynamic needs of racing cars are generally attractive, and the original GT’s styling has always been among the best examples of the breed. Clean, dramatic, and free of today’s show-off wings, sills, and other boy-racer add-ons, the new GT brings past and present together in a classic shape that looks as fresh now as it did in the mid-1960s.

The interior combines familiar elements of the past with enough contemporary styling to appeal to younger owners with no memories of the original. Seven large, clearly marked gauges are spread across the instrument panel with toggle switches below them. A small pod holds the starter button, and the less essential controls for the radio and air-conditioning are relegated to the center tunnel. The seats, minimally padded but comfortable, pay homage to the original’s vented design. Naturally, the painted-metal ambience of the old GT’s cabin is substituted with soft coverings and lots of polished aluminum and magnesium. Getting in and out is fairly easy, though everyone will bang his or her head on the door at least once.

As simple as the GT seems, its execution is as modern as tomorrow. The body panels are formed by heating aluminum sheets until they are pliable, then draping them over molds. This allows the complex curvatures of the doors to be made in one piece with first-rate finish quality. The space-frame chassis comprises dozens of aluminum forgings, moldings, and extrusions joined using the latest welding and fastener technology.

The engine, while based on Ford’s modular V-8 found in every­thing from Mustangs to Lincoln Town Cars to F-150 trucks, has been heavily massaged. Many internal parts have been upgraded, and a belt-driven supercharger nestles between the cylinder banks. It is mated to a 6-speed Ricardo manual transaxle built specifically for this application.

No car is perfect, and the GT is no exception. Most of the quirks noted in the test car were typical of pilot-production examples and are currently being reworked by the same group of designers, engineers, and fabricators who brought the GT from show car to production-ready machine in 16 overtime-filled months. The only serious criticism involves the lack of rearward visibility for the driver, which can be addressed only by the fitting of larger (and probably less stylish) mirrors.

Some buyers might be inclined to make several changes that Ford, for legal reasons, cannot. The first among them would be a more assertive exhaust system. The GT engine sounds healthy but muffled; it needs an exhaust note more akin to the unearthly howl of the original 7.0-liter Mark II GT racer. Four-point seat belts would be appreciated as well. There seems to be no way to increase luggage space, which amounts to little more than room for a toothbrush and a change of Skivvies.

Push the starter button and head for a challenging road, and concerns about the stamp-sized luggage space will be banished. The Ford GT excels as a driver’s automobile—impressively fast and far more refined than expected. It is the embodiment of what a racer-turned-road car should be, though it was developed from the beginning for street use. Its connections to an exciting past are strong, tangible, and fully merited. In a word, the car is magic.