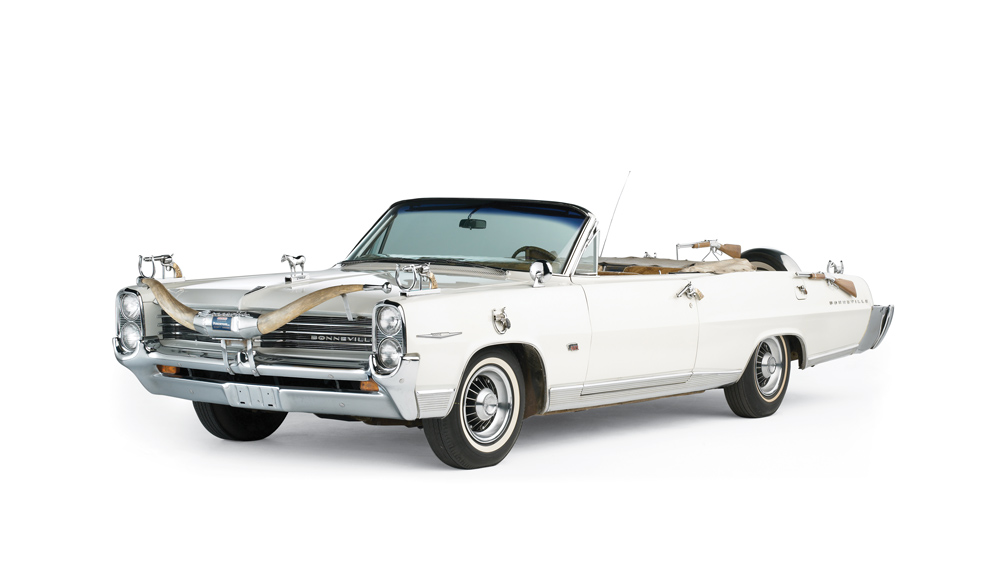 A guided tour through some of rock ’n’ roll’s best garages.

Sammy Hagar sang “I Can’t Drive 55” and he has a chance to prove it every time he adds to his collection of Ferraris. But forgive this former Van Halen front man’s lead foot; these days, as lead singer of Chickenfoot, Hagar is racing to achieve the thrill he gets jamming onstage. “When you’re in a band that goes out and plays arenas for tens of thousands of people,” he says, “and they’re screaming and singing your songs, the excitement of that is only matched by a few things in life.”

Screaming down the highway in a 12-cylinder supercar is one of them, and Hagar is not alone in that opinion. Musicians from Adam Ant to ZZ Top have testified to their love of cars, whether it was Ronny and the Daytonas waxing poetic about a GTO, Bruce Springsteen celebrating his pink Cadillac, or Don McLean driving his Chevy to the levee. Jackie Brenston’s “Rocket 88,” recorded in 1951, is widely considered the first rock ’n’ roll song, and it is about an Oldsmobile.

“That really says something about the interconnectedness of rock ’n’ roll and automobiles and that feeling of freedom and not having to answer to the man,” says Meredith Rutledge-Borger, a curator at the Rock and Roll Hall of Fame. “You can just get behind the wheel and go wherever you want to go. That’s what rock ’n’ roll does.”

Few musician-owned cars have the backstory and music lineage of Williams Jr.’s “Silver Dollar Cadillac.” Commissioned by Audrey Williams, Hank Williams Sr.’s first wife, Hollywood cowboy tailor Nudie Cohn gutted the interior of the Bonneville convertible and replaced it with silver dollar–studded saddle-like leather and installed six-shooter pistols for door handles. Massive cow horns are mounted on the grille. The car was sold out of the John O’Quinn collection to Kid Rock in 2010 for $225,500 at Amelia Island.

Where Hank Jr. busted staid Nashville wide open when he added rock influences to his traditional country sound, Kid Rock crossed musical lines with his blend of rap and rock. Kindred spirits, they both owe a debt of gratitude to Williams’s pappy, and live these lines from a Kris Kristofferson song: “If you don’t like Hank Williams, honey, you can kiss my . . .” rear end, which in the Bonneville’s case has a rifle mounted on it.

The car Elvis drove while he was stationed in Germany with the United States Army spent the last four decades gathering dust in a Northern California pumpkin warehouse. Just 254 507s were built between 1955 and 1959, and last year the BMW Classic Center in Munich obtained the Elvis car and turned it over to a team of experts. The

plan is to restore the roughed-up roadster to its original, fit-for-the-King splendor in time to display it for the marque’s 100th anniversary in 2016. One thing that probably will not change: the color. The cherry-red 507 was originally white, but repainted to deter female fans from covering the car’s body with messages written in lipstick.

As a boy in Shreveport, La., Shepherd drew cars for school art projects, carried toy cars in his pockets, and loved the Dukes of Hazzard, Smokey and the Bandit, and Knight Rider (naturally, he considered the cars the stars of those shows). Now the Grammy-nominated singer/songwriter has a collection of nine muscle cars with an emphasis on Mopars, and one of them has a connection to that youth he spent obsessing over power and speed: his 1970 Plymouth Duster, the car his mom owned when she met his dad.

“I built that car in particular to show the enthusiasts that there are still Mopars out there that are affordable and that are really good-looking cars and can be made to look incredible with just bolt-on equipment,” he says. “We did no body modifications. Nothing was cut, no metal was cut.”

“There’s something about cars and going fast and speed, everything involved with it, that I love,” says Kramer, who has owned 150 to 200 cars over the years. “I’ve had everything from Ferraris to Lambos to Maseratis to Corvettes.” When Aerosmith was in Italy last June, Kramer toured the Lamborghini factory and test-drove the new Huracán. Sold. “This is hands-down the best Lambo they’ve ever made,” he says. “The car has a 200-mile-an-hour top end. It’ll never happen with me driving it, on the track or on the road. I’ve had it up to about 155, 160.”

Last year, the hip-hop artist sold 25 cars in his collection, including a Bugatti Veryon. The Ghost, his favorite car among the remaining dozen, is “the car I get driven in,” he explains. “I like going out a lot. I drink when I go out, and I don’t want to be drinking and driving.”

The Ghost has been customized to accommodate a party, including an aquarium-like holder for a bottle of Louis XIII cognac recessed into the loud, loud, loud sound system. “You’ve got a $3,000 bottle of alcohol right at your fingertips,” he says. “I don’t really want to open that bottle. I want to let it age with the car.”

Hagar collects 12-cylinder Ferraris and has owned 20 of them so far. “You come off a tour, you come offstage every night for 40, 50 cities. You want that thrill, but you don’t feel like going back out on the road. You just jump in one of your cars. You can really get it—it’s about as close to the adrenaline rush and the excitement.

“When I’m screaming at the peak of my range, I want it to sound like a 12-cylinder Ferrari at 7,000 rpms. And the same with my guitar. I crank it up until it’s ripping and it sounds like a high-performance engine.”

The original shock-rocker was born in Detroit and is the son of a used-car salesman, so it is natural that he grew up to be a car nut—and that his collection runs deep with cars as

outlandish as his persona. Cooper helped design this theme car to promote his 1973 album, Billion Dollar Babies. Billion-dollar bills flame across the Zephyr’s lime-green body and spew out of a cash machine in the trunk. In 2010, he sold the car through Barrett-Jackson for somewhat less than a billion: $95,000.

When the Beatles were christened Members of the British Empire in 1965, they drove to Buckingham Palace to meet the queen in Lennon’s Rolls-Royce Phantom. Four years later, Lennon returned his MBE medal to protest the Vietnam War, a gesture that came to symbolize Lennon’s growing political awareness and his increasingly outspoken nature. He drove the Rolls again this time, and it reflected that change, too. It had standard black paint when he picked up his MBE. When he returned the medal, the car was covered with a “psychedelic” paint job in the style of a gypsy caravan.

Janis Joplin’s most famous lyric was probably “Lord, won’t you buy me a Mercedes Benz / My friends all drive Porsches, I must make amends.”

Instead, she bought herself a Porsche and had a roadie give it a psychedelic paint job that included portraits of Joplin and her band. “When Janis got that car, it was a cream color—oyster white—that was just way too tame for her and her sensibilities,” says Meredith Rutledge-Borger, a curator at the Rock and Roll Hall of Fame, where the car is on long-term loan from Joplin’s family. “She was such an over-the-top, larger-than-life personality. Driving around in a car more suited for a country club was just not happening for her.”