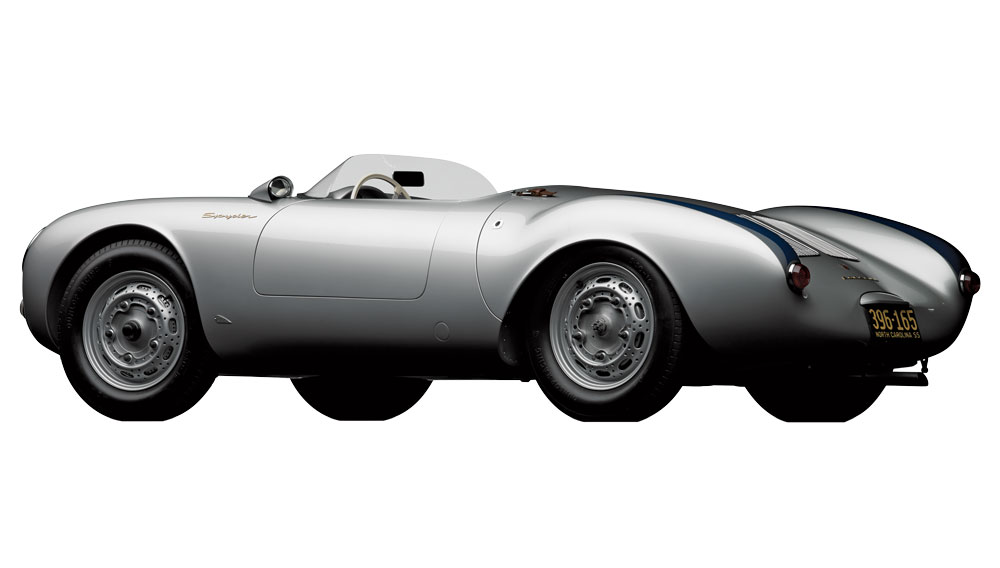 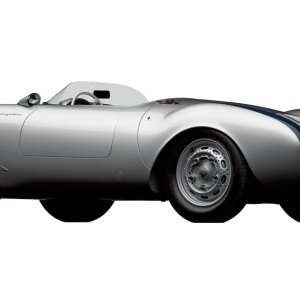 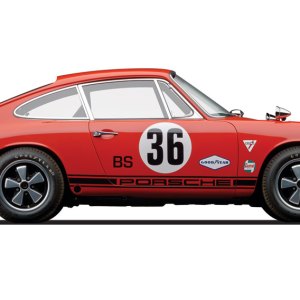 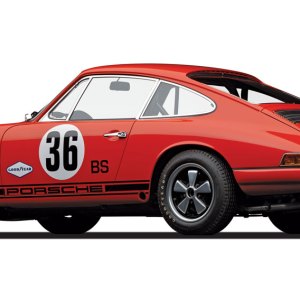 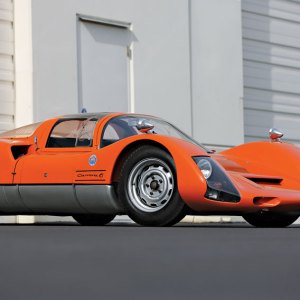 Vintage Porsches are ascending to new heights among collectors.

It is called the giant killer. The Porsche 550 Spyder sits near the back of the Ingram family’s storied collection of Porsches in a beautiful old Studebaker warehouse in Durham, N.C. It lies in wait, ready to attack, like it did when it raced on circuits across the United States in the mid-1950s, slaying foes alleged to be much more formidable. Cam Ingram circles around the Spyder, taking in from every angle the unadorned beauty of the first production racecar Porsche ever made.

Porsches endure, in part, because they are arrestingly simple, even inevitable—and this car is a perfect example. It is silver and low slung, without an extraneous curve or superfluous rivet on its sleek aluminum body, penned by Porsche designer Erwin Komenda. The longer you stare at it, the more overwhelming the desire to climb in and take off.

Lately, Porsche fans have been putting up big dollars to indulge that need for speed. In the last four years, Porsche 550s have quadrupled in value, and 993s, the 911s of 1993 to 1999, have tripled in just the last 18 months, says Richard Sloan, who sells Porsches through Sloan Cars in New Haven, Conn. The surge of

the 993 partly reflects collectors’ interest in air-cooled engines, as it was the last Porsche to have that type. “It’s just absolutely bedlam,” Sloan says of the market. The results at the January Scottsdale auctions prove his point: The average selling price for a Porsche was $336,200—more than triple what it was four years earlier, with prices buoyed by a 1966 906 Carrera 6 that fetched $1.98 million and a 1988 959 Sport that drew $1.7 million, both at Gooding & Co.

The spiraling value of Porsches coincides with an upsurge across the collectible car market, which started roughly four years ago and continues to accelerate, depending on the model. No surprise, classic 911s made from 1964 to 1999 are leading the pack. In January, Russo and Steele sold a 1974 911 2.7 RS for $302,500—the highest price for a 911 in Scottsdale this year. In Scottsdale overall, 23 classic 911s sold for an average of $166,698. No doubt, Porsche mania is alive and well.

Which leads us back to the Ingrams’ Spyder. The car was a technological marvel when it was introduced in 1953, with a design lifted from German airplane technology. Put wings on this bad boy and it would fly: The 1,498 cc Fuhrmann-type 547 mid-mounted engine launches the Spyder to a top speed of 135 mph. “You’re talking about a 1,200-pound car that has 150 horsepower,” says Cam Ingram. “It’s like a go-kart on steroids.”

The Ingrams behind the collection—Cam, his father Bob, mother Jeanie, and brother Rory—will not say exactly how many Porsches they own, but their collection is among the deepest in the country. The Spyder—sometimes called the James Dean car because the actor was driving one in his fatal crash—ranks among

its jewels. So do the 1949 356/2 Gmünd coupe, a rare Austria-made Porsche; the 1988 959 Supercar; and the aluminum-bodied 1967 911 R. Bob Ingram, the former CEO of GlaxoSmithKline, started it all in 1991, when he bought his first Porsche, a 911 C4 Cabriolet. But things got serious in 1998 after spying a 356 on a family trip to the Monterey Historic Automobile Races. Cam Ingram, too, was so awed by the 356’s simple beauty that he devoured every word he could about Porsches and started Road Scholars, a Porsche renovation company with shops in Durham and on San Juan Island, Wash. His restoration of a Gmünd owned by Hans Peter Porsche won first place in its class at Pebble Beach in 2011.

Now the Ingrams divide their cars into four separate collections: early Porsches, irst production racecars, Turbos (they have one of every Turbo ever made from 1975 until production stopped in 1997), and Rennsports (commonly known as RS, these were produced so that competition cars could be called production-based racecars). Jeanie Ingram sums things up for all of them when she extols the pleasure of barreling down I-95 in her 1955 Speedster, a cream 356 that stands just 4 feet tall, houses a 4-cylinder rear-mounted air-cooled engine, and hits a top speed of 109 mph.

The Porsche family has been helping drivers do that since Ferdinand Porsche fabricated an electric vehicle before the turn of the last century. The Porsche name is behind two of the most iconic cars ever built—the 911, of course, and the Volkswagen Beetle, designed by Ferdinand Porsche long before he and his son, Ferdinand “Ferry” Porsche, opened their own shop in Gmünd, Austria, in 1948 with 200 employees.

Their first sports car was the 356, which debuted that same year. Its rear-mounted engine produced just 40 hp. But it was comfortable, reliable, and handled well—all traits that have characterized Porsches since then. The 911 followed in 1964 and remains among the most recognizable cars in the world. Throughout its history the company also has been devoted to racing, with an estimated 24,000 wins in races worldwide. There may be no group of car collectors more passionate: The Porsche Club of America boasts 115,000 members, which makes it the largest car club for a single marque in the world—with new converts daily. Last year in the United States, Porsche had its two best single-month sales totals ever. The Macan, a midsize SUV, has a six-month waiting list. The 918 Spyder is Robb Report’s 2015 Car of the Year.

Porsche passion starts with a simple premise: Driving is fun. Driving fast is more fun. Driving fast with a visceral connection between you and the pavement is the most fun. And that is where Porsches really shine. Porsche denizens scoff at such modern conveniences as power steering and power brakes. They want to drive their cars, not just ride along as modern technology does all the work. Another key factor in Porsche’s enduring appeal is its consistency, both in performance and appearance, throughout the company’s history and up and down its product line. Walking through the Ingrams’ collection is like walking through a family reunion, with the 1949 Gmünd the grandfather of the tribe.

The Gmünd, highlighted in a book cowritten by Cam Ingram called Porsche Unexpected: Discoveries in Collecting, is the family’s most historically significant car. Designed by Komenda, it has one of the last surviving hand-pounded aluminum bodies. It was built by hand in the company’s shop in Gmünd, before the company moved and eventually settled in Stuttgart, Germany. The Ingrams’ Gmünd is chassis no. 17, one of the oldest remaining models. In the Ingrams’ warehouse, it is surrounded by its myriad descendants, and the family resemblance is uncanny.

“If you look at the Gmünd, and you go to the latest 911, you can see the shape has not dramatically changed,” Bob Ingram says. “The basic shape is still the same. I don’t know that there are many brands of any kind of product that over 60 years you can say that about.”

Wherever a Porsche falls on the family tree, it gets driven. A lot. “They are a supercar that you can drive every day,” says Vu Nguyen, the executive director of Porsche Club of America. “No matter if it’s a ’70s Porsche, an ’80s Porsche, a ’90s or today’s Porsche, you can wake up, drive to work, you can go to the grocery store, come home, go to dinner on Friday night, pack it up, take it to the track, pound on it all weekend at the track, then take it home, rinse it off, and repeat on Monday morning.”

“Way different than Ferrari,” says Ranson Webster, the founder and managing member of an investment group in Reno, Nev. His collection of 50-plus Porsches stands with the Ingrams’ as among the best in the United States. Webster focuses on vintage racecars and limited-production models—with a particular focus on four-cam engine cars, an assemblage believed to be the most extensive outside of Stuttgart. He also owns a large parts inventory and an extensive array of Porsche model cars, posters, and brochures in every language for every model through 1987. About 95 percent of Webster’s cars qualify as concours level. He drives them anyway.

“It’s a shame to have a wonderful collector Porsche racecar and let it sit on a pedestal and stand back and polish it,” says Webster, who bought his first Porsche, a turbo Carrera, in 1979. He became a serious collector around 1998, after he sold Computing Resources Inc., a payroll services company he founded. “It just seems to me that cars are made to drive. They weren’t made to look at.”

Alas, there are exceptions even for Webster, including his 1962 804 Formula 1 car, the only Porsche to ever win an F/1 race, which puts it at the top of all Porsches in terms of provenance.

Sitting behind the cockpit is a 1,494 cc engine. It is air cooled, horizontally opposed, and generates 180 hp at 9,200 rpm. But the car weighs just 996.5 pounds and has no roll cage. If the Ingrams’ 550 Spyder is a go-kart on steroids, the 804 is a jet fighter on Red Bull. “A death trap,” Webster calls it. As much as he likes to feel the road beneath him, the possibility of that happening too literally is too great.

But the 804 is the exception. If a car can be driven, Webster drives it. His 935 K3 racecar is so notoriously difficult to drive that he was told not to bother trying. The three-liter engine generates massive horsepower relative to the racecar’s weight, which means the back end shimmies like a sundress every time it takes a turn.

But that did not sound difficult to Webster. It sounded fun. Plus, the 935 is an important car in Porsche’s racing history. It is essentially a 911 transformed into a racecar, with a flat nose and a wing on the spoiler. It dominated Group 5 for years and won at Sebring, Daytona, and Nürburgring.

“You really drive that car with the throttle more than with the wheel, understanding that when you go around corners you’re slipping at all times,” he says. “It’s kind of a brute, you know?”

But oh, what a bodacious, breathtaking brute.

As the most prized vintage Porsches skyrocket in value, some of the marque’s lesser models are becoming investment material. Among those getting a second look:

The 930. This model, also known as the 911 Turbo, was produced from 1975 through 1989 with an air-cooled flat-six engine that cranked out 256 hp. Drew Alcazar, co-owner and CEO of Russo and Steele, says Porsche 930s fall into the “smart buy” category and “are certainly worth a look for investors looking for strong long-term prospects.” The 1986–89 models showed particular strength, Hagerty found, with a 104 percent increase in the last five years.

The 912. The 912 sat in the 911’s shadow for years. In production from 1965 to 1969, it had two fewer cylinders so it lacked the same power and was significantly cheaper. Owners were not hard-core Porsche enthusiasts and were more likely to update the cars, which is anathema among purists. But the 912 has enjoyed a bit of a comeback lately, caught up in the rising tide of the 911 and 356. A 912 sold at Gooding & Co. in January for $82,500—an unthinkable price just a few years ago.

Carrera, was introduced in 1993 it was heralded, as many Porsches are, as a racecar built for the street. Enthusiasts loved its minimalist, frills-free design. And today, with renewed interest in that pared-down style, collectors are taking another look at this model. Hagerty’s research shows the RS America has nearly tripled in value over the last five years, from $32,100 to $93,400.