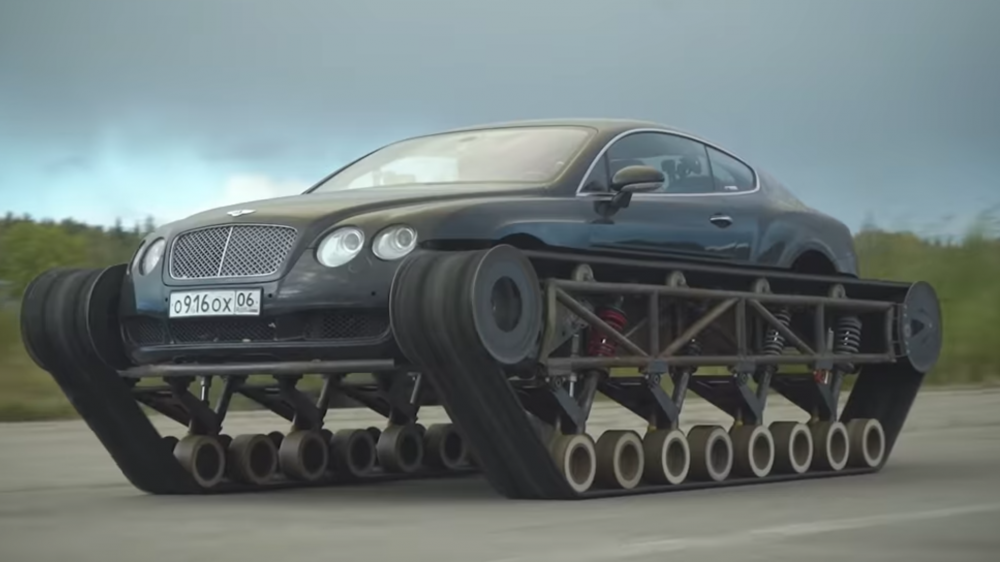 Unholy monstrosity or innovative crossbreed? The Bentley ‘Ultratank’ is quite possibly the most divisive vehicle we’ve ever come across. Love it or hate it, you can’t argue that it’s impressive and a new video of the brute achieving 81 mph proves it.

The suped-up Bentley—which has been custom fit with caterpillar tracks—first popped up on our radar back in May after a group of Russians at the YouTube channel AcademeG began merging a tank with a Continental GT. The two vehicles sit at polar ends of the spectrum—one is synonymous with luxury; the other, well, the military—but together create a transfixing ride, probably due to the fact the creators decided to keep the ultra-luxe Bentley interior.

According to GQ, AcademeG nabbed the cheapest Bentley Continental GT they could find—one with a broken frame, a busted gearbox and a W12 engine in need of both turbos replacing—and set to work switching the car’s wheels with caterpillar tracks. (You can check out a full video of how the Bentley Ultratank came together here.)

Over the past couple of months, the tank has demolished some hurdles—in both a physical and metaphorical sense—the tracks have come off and nearly totaled the bodywork more than once and the brakes system was entirely amiss and needed to be fixed. But, on Monday, all that hard work finally paid off: The Ultratank reached an incredible top speed of 81mph, prompting its creators to dub it the world’s fastest tracked vehicle. Indeed, it eclipsed the speedy Ripsaw Tank which climbs to about 60 mph.

Sure, it’s not that impressive when you consider the Continental GT can typically exceed 200 mph—but the sheer guts of this Frankenstein vehicle should trump the speed. The Ultratank can cover steeper gradients and rougher terrain, and a quick scroll through the Youtube channel showed the custom ride making mincemeat of other cars.

Despite reaching a momentous 80 miles, the creators say that they are not yet finished, and hope to one day get closer to the top speed the unaltered car can achieve.

Check out a video of the Ultratank hitting 81 mph below: