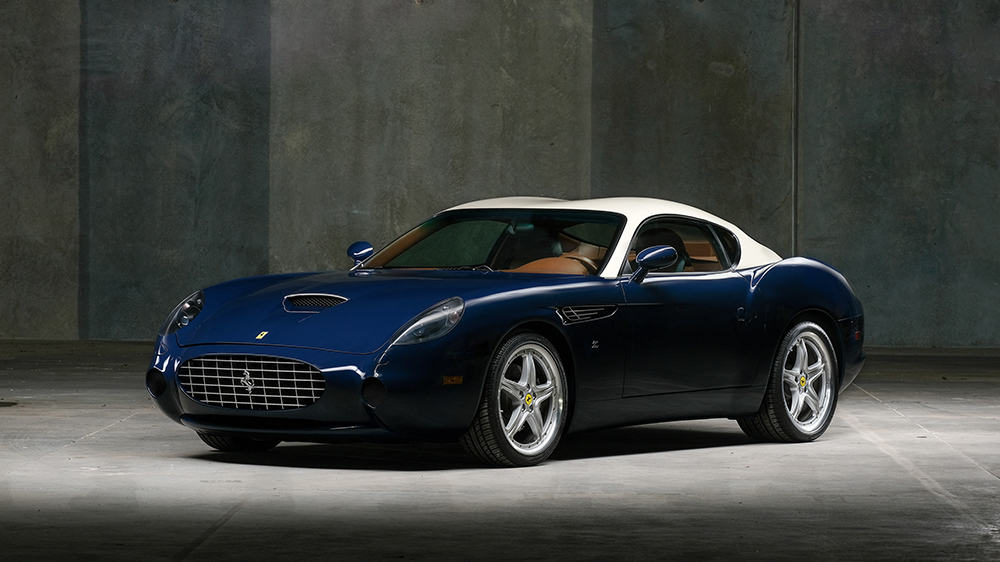 Even in the upper echelons of the car collecting worlds, few marques are more closely associated with glamor and exclusivity than Ferrari. But it’s also important to remember that not all of the Prancing Horse’s offerings are created equal. Case in point: Later this month, one of the rarest Ferrari’s of all, the 2005 Ferrari 575 GTZ Zagato, is heading to auction.

A gorgeous two-tone example of the limited-edition sports car will go up for bid later this month as part of RM Sotheby’s online-only Shift/Monterey sales event. The exquisite speedster is just one of six examples of the car ever made, and one of only two delivered to these shores, meaning it’s the sort of car true Ferrari enthusiasts will be dying to get their hands on.

The car is a special edition variant of the 575M Maranello meant to pay tribute to the famous 1956 250 GT Tour de France Zagato, widely considered one of Zagato’s finest designs. This one is specifically based on chassis no. 0515 GT, a car that held its own at races, hill climbs and awards shows during the late ’50s, with several trophies to its name.

Ferrari brought in the Milan-based coachbuilder to craft the 575 GTZ Zagato’s retro-inspired alloy body. Crafted to each customer’s specific wishes, the variant is more bulbous than the standard 575M, and features a prominent “eggcrate” grille and Zagato’s iconic double-bubble roof. This specific model also features the same two-tone paint scheme as the original chassis no. 0515 GT, with off white atop a deep midnight blue. Inside the two-door, you’ll find an elegant interior coated in quilted tan leather.

While the Zagato-designed body differs significantly from the 575M, things are the exact same underneath it. But this is one of those situations where that is a good thing. The rear-wheel-drive coupé is powered by an impressive 5.7-liter V12 engine. Mated to a paddle-shifted sequential transmission, it produces a hearty 515 horses. Despite being 18 years old, that engine should be in pretty good shape, too. In addition to undergoing regular maintenance, the vehicle has just 3,678 miles on the odometer.

RM Sotheby’s Shift/Monterey auction is scheduled to run from August 14 to the 15. Though the auction house didn’t provide a price estimate for the 575 GTZ Zagato, but you can safely expect the rarity and scarcity to inform the final cost. Other highlights of the sale include a 1960 Mercedes-Benz 300 SL Roadster, a 1986 Porsche 962 IMSA GTP race car and a 2014 Pagani Huayra.