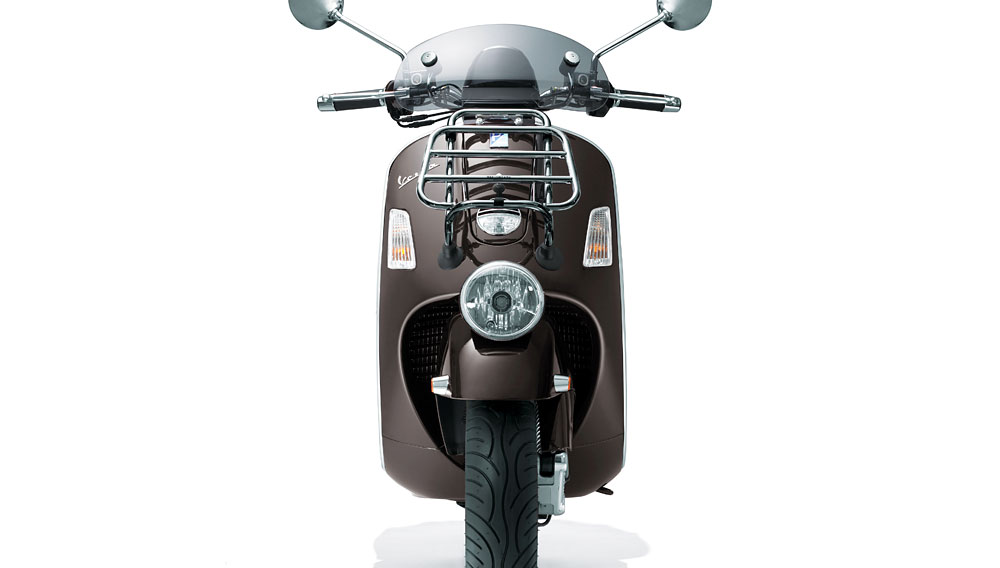 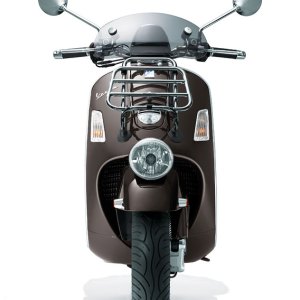 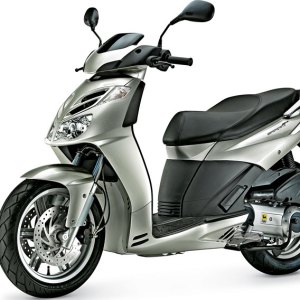 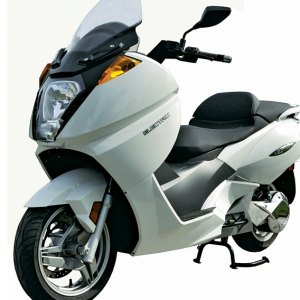 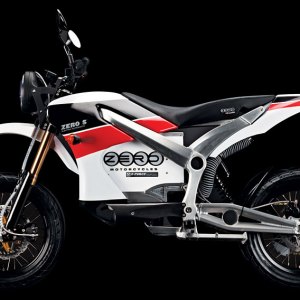 Conceived in the aftermath of World War II, at a time when many European countries were attempting to rebuild and restore tattered, downtrodden economies, the modern-day scooter became a vehicle that redefined the streets of many old-world cities. Scooters provided many with inexpensive and reliable transportation, and made the case that creative and stylish two-wheeled designs could exist beyond the motorcycle.

More than half a century later, the scooter has evolved into numerous iterations. Traditional models—those powered by small, internal-combustion engines—still remain, although their styling and design reflect modern-day sensibilities and desires for the sleek and the sporty. Other models have found power and success not through the two- or four-stroke engines of the past, but through cutting-edge technology and the electrical outlet. And some seem to warrant a new classification all their own.

As the industry constantly evolves, there are plenty of two-wheeled vehicles to choose from, whether you’re looking for a versatile ride for the city or simply a toy on which to have some fun.

Not all success stories follow a straightforward and predictable course. Such is the case for Piaggio, an Italian brand well known for its two-wheeled vehicles, which include the Vespa (www.vespa.com) and Aprilia (www.aprilia.com) lines. The company was founded in Genoa in 1884 and initially established itself as a ship-fitter. Shortly thereafter, Piaggio began producing luxury coaches and engines, and by the onset of World War I, the Italian manufacturer was constructing airplanes and seaplanes. World War II had a much different impact on the company, however, as Piaggio’s two Tuscany-based factories, which were instrumental in the production of bomber plane engines, were—predictably—bombed by Allied forces. With the Italian economy in shambles after the war, Enrico Piaggio understood that his company’s survival depended on its ability to produce a low-cost product that would appeal to the masses. By 1946, the first Vespa prototype was born.

For decades, Vespas were the vehicles synonymous with the term “scooter.” Over the years, their styling has grown sportier, but the brand always was careful to retain the recognizable Vespa look. The latest model, the GTV 300 ($6,899), takes styling cues from its early-1950s predecessors. However, this is not the same Vespa once immortalized by Gregory Peck and Audrey Hepburn.

“It’s still got all the modern features of a Vespa,” says Rick Panettieri, director of product management for Piaggio Group Americas. “The newest ones are liquid-cooled, four-stroke engines, so it’s similar to a more modern motorcycle engine. The older Vespas were mostly air-cooled, two-strokes. They would smoke and had a rattly noise that most people connected with a two-stroke engine.”

The rattle is gone, replaced with a 278 cc engine capable of 76 mph, but the characteristic steel frame and leading-link front suspension that have come to define all Vespas give this quick-driving throwback the smooth ride and secure handling that a Vespa enthusiast has come to expect.

Through its Aprilia brand, Piaggio has created a scooter—the Sportcity—that combines the handling and convenience of a vehicle ideal for city driving with the size and power needed for highway commuters. Available as either a 250 cc ($4,699) or a 300 cc ($4,899) and sporting a dry weight of 326 pounds, the Sportcity may be a lightweight vehicle, but 15-inch wheels and a top speed exceeding 80 mph make it a versatile means of transportation. According to Panettieri, the Sportcity evokes the look and feel of sport bikes from the late 1970s. “I hate to call it a wolf in sheep’s clothing,” he says. “It has a mature look, but the Aprilia racing heritage shows up. It’s one of the quicker and more sporting scooters, but it’s still a scooter with twist-and-go transmission.”

Back in 2007, the sky seemed to be the limit for Vectrix (www.vectrix.com). The Massachusetts-based electric vehicle company, implementing nickel metal hydride battery technology, was just beginning mass production of a two-wheeled bike capable of 62 mph and a range of 68 miles per charge, or the equivalent of about five hours of city driving. When the economy collapsed in 2008, however, Vectrix, like most companies, felt the effects of the recession that followed. By late 2009, the company had filed for bankruptcy.

For many businesses, such an event would characterize the unfortunate end to a story with such a promising beginning. Not so for Vectrix.

Recognizing the potential of the product line, one of Vectrix’s vendors purchased the company and injected new life into it, particularly by incorporating more-advanced lithium ion battery technology. The result now is a vehicle (the VX-1) capable of 80 miles of driving per charge, a top speed of 68 mph, and acceleration from zero to 50 mph in about six seconds. “It’s almost a second improvement by going to lithium,” Brian Buccella, the company’s vice president of sales, says of the VX-1’s improved acceleration. But he says that the switch in battery technology, which reduced the bike’s weight by about 60 pounds, manifests itself in other areas. “Because you’re removing about 60 pounds of weight, it makes the bike a little lighter in how it feels in the corners and it gives you better handling performance, as well. And if you use a lithium battery, you have constant voltage and current and that allows you to maintain maximum performance in the motor from takeoff to top speed.”

For years, Vectrix had only one model, the 500 cc VX-1 ($11,995). But as economic conditions started to improve, and as the company learned to maximize its new battery technology, more diverse models began to take shape. The company recently launched the VX-2, a 50 cc version which, as Buccella says, enjoys many of the same bells and whistles as the VX-1, but at a different price point—$4,295. The company also has plans to unveil a three-wheeled vehicle later this year, which, unlike the company’s other two models, would not require a motorcycle license to operate. “It opens up our portfolio to a different class of consumer,” Buccella says.

We’ll say it right up front: the Zero S is not a scooter. And it’s not trying to be. Far from it, actually. As the brainchild of Zero Motorcycles (www.zeromotorcycles.com), the Zero S ($9,995) is the company’s street-focused model, which shares stable space with a dirt bike and a dual-sport version. And as one might gather from the company’s name, Zero Motorcycles sees itself as just that, a manufacturer of motorcycles But there is one notable distinction: all of the company’s vehicles are electric. “It’s just as important to me to tell people who we aren’t as to tell people who we are,” says Scot Harden, a Zero Motorcycles vice president. “A lot of confusion came in the past when people were looking at these new electric motorcycles and comparing them to internal combustion motorcycles. They don’t measure up. With this new technology in its infancy, you have to be clear selling what your bike can and can’t do.”

What the Zero S can’t do is 100 mph in second gear—something that Harden says other, traditional sport bikes can, but he is quick to point out that the traditional sport bike demographic was never Zero Motorcycles’ intended audience. Instead, the Zero S offers instant torque and power from a standstill, a top speed of 67 mph, a maximum range of 58 miles, and simple controls that suddenly make motorcycle riding an appealing option to more people. “There is no clutch and no gears to shift. Just twist the throttle and go,” Harden says. “It’s lowered that intimidation factor. Guys who were fearful of motorcycles before no longer are.”

That’s not to say that Zero S riders are inexperienced when it comes to motorcycles As Harden points out, many of the company’s customers had a prior motorcycle connection, but calling them avid bikers  might be a stretch.  Instead, it’s safer to say that those customers had dabbled in motorcycle riding in the past, but haven’t owned a bike in many years.

For an alternative, two-wheeled vehicle, the Zero S can provide an exciting ride, but the company is not satisfied to rest on its laurels. “Obviously, there’s always room for improvement,” Harden says. “Range is always an issue. The more range we get, the better we’ll be. The faster top speed, the more versatility we’ll get out of them.”

As the company works toward those improvements, it continues to attract new customers—customers that Harden sees as the necessary component in the effort to make such electric vehicles the future of transportation. “They’re all early adopters and believe in doing something positive for the environment,” he says. “And with a motorcycle, they can have fun in the process.”