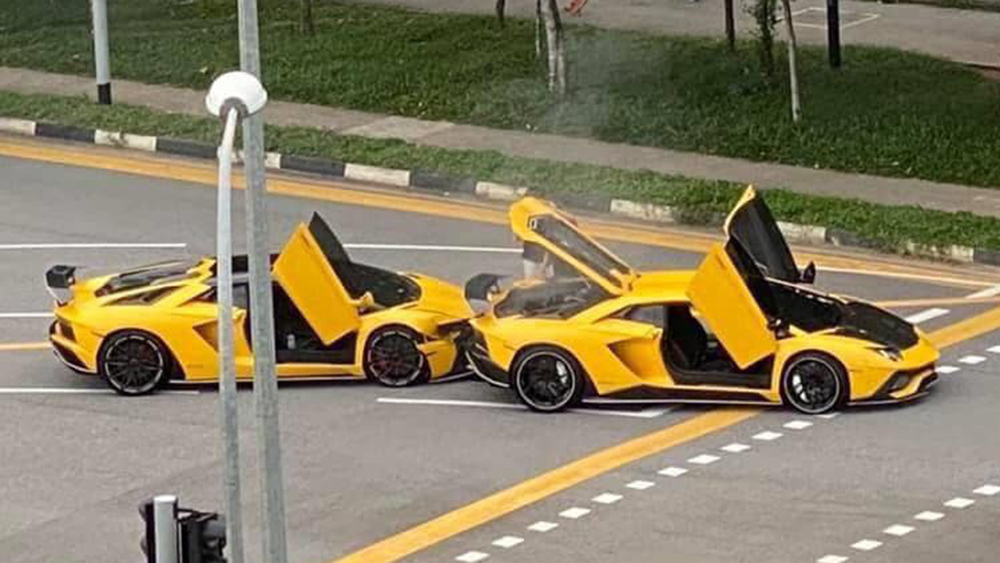 There are few things serious car buffs enjoy more than showing off their vehicles. And if they can parade around town with their similarly auto-obsessed friends, that’s even better. But there are risks involved with this kind of showboating, something two Lamborghini enthusiasts recently learned the hard way.

Earlier this month, the driver of a lemon yellow Aventador S rear-ended a nearly identical Lamborghini on the streets of Singapore, reports Car Scoops. And as you might expect from the crash of two over-the-top supercars, there were plenty of people on hand to document the accident for social media.

The cringe-inducing accident took place on Sunday, June 7, during the early evening hours, according to local accounts. The driver of the first yellow Aventador reportedly came to a stop at a light on Sembawang Road moments before a second yellow Aventador plowed right into the back of its doppelganger. At that point the two drivers exited their cars, removed the license plates and surely wondered whether the universe was having a laugh at their expense. Shortly after, authorities arrived and by the time the popular intersection had grown dark, both cars had been towed away.

While the streets of Singapore, like many other cities during the global pandemic, appear to be less busy than normal, there were still plenty of bystanders around to snap pics and take video of what was surely a very expensive accident. Judging by the posts shared on social media, the front Aventador appears to have sustained a substantial amount of damage, including a smashed up rear bumper, quarter panel and diffuser. In one video, it appears that a small fire broke out in the lead vehicle that needed to be put out with an extinguisher.

We know your first question: Did the drivers know each other? That remains unclear, but we do know that the $418,000 cars were more than a little similar to one another. While they are not identical twins, both are painted the same shade of yellow, have black accents, matching wheels and similar body modifications. Plus, the drivers seemed remarkably calm considering what had just gone down.

While both drivers were quick to remove their plates, a Facebook group entitled SG Road Vigilante, which appears to be focused on making the streets of the city-state safer, was able to identify both vehicles. The group pegged the banged up front car as the same vehicle that was involved in a reckless driving incident two weeks prior, cutting off another vehicle elsewhere in the city.