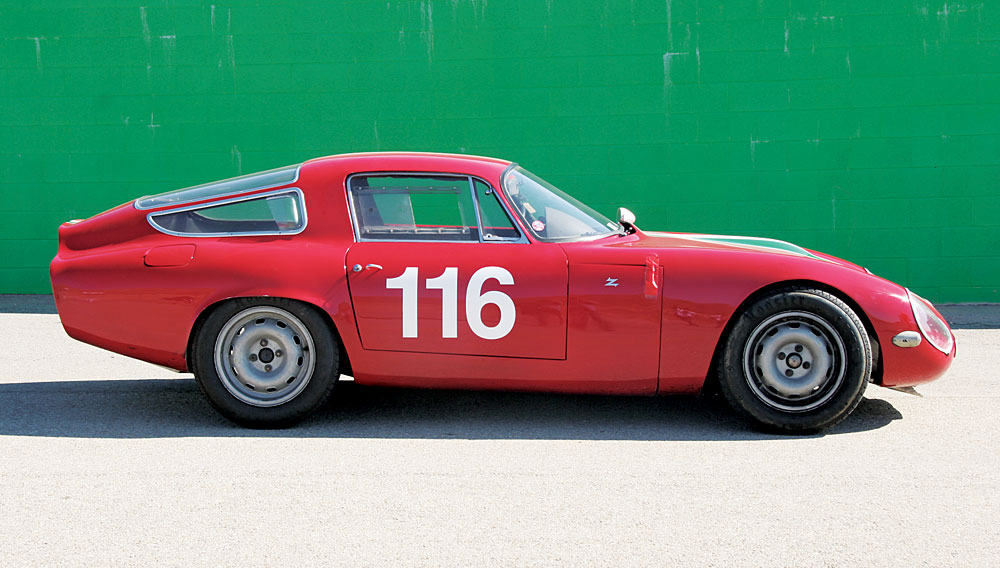 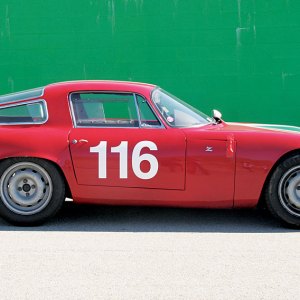 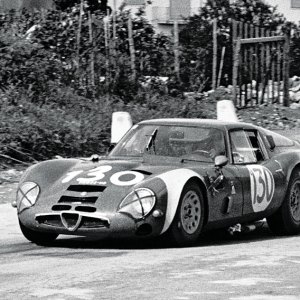 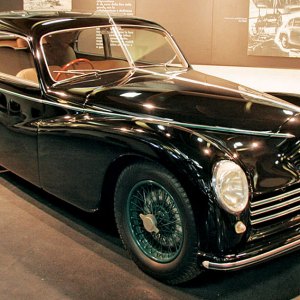 When Bill Lyon competes in vintage races, which he does on a fairly regular basis, he usually drives a Porsche—a 1957 356 Carrera, a 1960 RS 60, or a 1961 Carrera Abarth. But he plans to race in a different marque soon, a bright-red 1965 Alfa Romeo TZ2 that he acquired four years ago. It is one of only 12 TZ2s ever built. “I feel an affinity for the car,” says Lyon, the 37-year-old president and chief operating officer of William Lyon Homes in Southern California. He sounds like many other Alfa admirers, whose attachment to these cars has as much to do with their gorgeous designs and captivating feel as with their speed and efficiency.

The organizers of the 2009 Pebble Beach Tour d’Elegance recognized the beauty of Lyon’s Alfa. For the promotional poster and official program for the event—one of that year’s Pebble Beach Week festivities celebrating the 90th anniversary of Zagato, the Italian carrozzeria that designed the TZ2’s body—tour officials commissioned acclaimed automotive artist Peter Hearsey to paint an image of the car. Hearsey told Sports Car Digest, “This particular Zagato racecar was a fitting centerpiece for the poster,” which shows the car racing along a coastal road on the Monterey Peninsula. “The Alfa Romeo TZ2 featured the stylish but functional lines that made Zagato one of the most accomplished designers of his time.”

This particular TZ2, chassis number 750.106, also impressed Kazunori Yamauchi during the Concours d’Ele­gance, which took place later that week. Yamauchi is a car collector, a racecar driver, and the creator and a producer of the wildly popular Gran Turismo series of car-racing video games. An honorary judge during the concours, he awarded Lyon’s car the Gran Turismo Trophy, citing its artistic beauty as well as its historical success on the racetrack.

Yamauchi also included the TZ2 in the lineup of cars that players can drive in Gran Turismo 5, the game’s latest edition, which was released in November. The game’s designers spent days measuring Lyon’s car so that their video version would be as accurate as possible. “They also had me drive them up and down a local highway,” says Lyon, “so that they could record the sound of the car.”

Lyon has played the game but says, “I haven’t been able to get my point score high enough to access the car, and the company won’t tell me if there’s a shortcut to get to it more easily.”

Regardless of whether he ever races his TZ2 in the virtual world, Lyon can revel in owning the most stunning front-engine Alfa of its time. The car marked a major transition in styling for Italian coachwork; though voluptuous, its design was a departure from the overtly curvaceous shapes that long had characterized the country’s coachbuilding in general and Zagato’s work in particular. It signaled the beginning of a new era of lithe, greyhoundlike forms.

Collectors covet all of the Alfa Romeo 750- and 101-series sports cars—commonly known as Giuliettas and Giulias—but none more than the TZ2. The model’s days as a low-value racecar of yesterday were brief. One solid example was offered for $6,750 in 1972; today, a TZ2 can command from $2.25 million to $4 million or more.

The TZ2 evolved by chance, more than by design, from Alfa Romeo’s decision to produce cars for the masses. In the early 1950s, management determined that the only way to save the company from financial ruin was to expand its focus beyond racecars and expensive touring cars and begin building slightly upscale family sedans. The automaker planned to produce the Giulietta Berlina, an unpretentious, compact four-door—though one equipped with a twin-cam powerplant under its stubby hood.

Alfa was short of cash when the Berlina moved into production, and so it began selling bonds to finance the completion of the project. To promote the sale of the bonds, the company announced a lottery in which the winners would receive Berlinas. The bonds sold quickly, but as 1954 dawned, Berlinas were far from ready to roll off the assembly lines. Alfa sought to calm the grumbling bondholders by enlisting Carrozzeria Bertone to build a Berlina-based GT coupe as a substitute prize. That car, the Giulietta Sprint coupe, was so well received when Alfa presented it at the 1954 Turin Auto Show that the company put it into full production. Alfa Romeo added a Spider version by Pininfarina in 1956, and with some updates along the way, both models remained in production for more than a decade.

Special versions of the Sprint eventually followed the Spider’s introduction. Bertone designer Franco Scaglione—who was responsible for the BAT 5, 7, and 9—created the Sprint Speciale, or SS, in 1959, and a year later Zagato fashioned the SZ. The first 50 examples of the SZ sported a long, rounded tail; the later version was known as the Coda Tronca, or “short tail.” The SS and SZ were both based on standard Giulietta platforms and mechanicals, and neither could challenge rival marques on the racetrack.

The company tasked Autodelta—which served as Alfa Romeo’s racing department, initially as an independent company and then as a subsidiary of the brand—with producing a more competitive car. Autodelta delivered a new, tubular chassis with four-wheel independent suspension. Zagato’s Ercole Spada, designer of the 1960 Aston Martin DB4 GT Zagato, provided the bodywork, which resembled the SZ’s but had a more modern shape. A mildly tuned 130 hp Giulia engine powered the car.

Alfa Romeo dubbed the car the Tubolare Zagato, or TZ, and built 105 examples from 1963 to 1965. Though it fared well in competition, the TZ was not the fastest or best on the track, so Autodelta went to work creating what would become the TZ2.

The racing department left the TZ’s basic chassis intact and concentrated on reducing weight and adding power. It shaved almost 90 pounds from the 1,450-pound TZ by forming the new lower-slung, more rounded Zagato-designed body in fiberglass instead of aluminum, and replaced the three-pane rear window with a single glass panel. On the Giulia engine, tuner Virgilio Conrero installed twin-plug cylinder heads developed for the Alfa GTA racer; added dry-sump lubrication, lightweight magnesium accessory castings, and more radical camshafts; and revised the induction and exhaust systems. After Conrero’s ministrations, the 1600 cc powerplant developed as much as 170 hp and the TZ2 weighed only about 1,350 pounds. The car’s top speed was faster than 150 mph.

Of the 12 TZ2s built, six went to Autodelta’s racing team, five were sold to individuals or private racing teams, and one chassis was given to Carrozzeria Bertone, which used it to build the road-going Canguro (Italian for “kangaroo”), a show car that was lauded at the 1964 Paris Motor Show but never went into production.

Autodelta put its six TZ2s on the track almost as soon as their paint had dried. Chassis 750.106, the car that now belongs to Lyon, earned laurels in the 1965 1,000-kilometer race at Monza, Italy, placing first in its class and seventh overall, and in the 1966 Targa Florio, where it took second place in its class and finished 10th overall. In 1966, the car also raced in the 12 Hours of Sebring, the Nürburgring 1,000-kilometer event, and at Monza. It did not fare as well in those races, suffering gearbox malfunctions at Sebring and Monza and also failing to finish the Nürburgring, for an unspecified reason.

Following the 1966 season, Autodelta passed the car along to the Jolly Club, a group of auto enthusiasts in Milan who ran Alfas and other marques in races and rallies both major and minor. The car’s time with the club is not well documented, but in its one reported major race, at Monza in 1967, it did not finish.

Notwithstanding the apparent fragility of chassis 750.106, the TZ2 was, as Yamauchi observed, a success both competitively and artistically. Though posing no threat to Ferrari, Ford, or Porsche for overall victories, the six Autodelta TZ2s earned an impressive array of class triumphs in the major long-distance races of 1965 and 1966. Perhaps the only major disappointment was the 1966 Le Mans event, when chassis 750.106 and the other two TZ2s that entered the race failed to finish. But in that same year’s Targa Florio, a TZ2 outran and outlasted many of its large-displacement rivals to finish fourth overall.

By 1967, Alfa Romeo, seeking the more high-profile overall race victories instead of just class wins, was developing the mid-engine, V-8 Tipo 33, which would spawn the stunning 33 Stradale road car. Thus ended the era of front-engine racing Alfas, except for some highly modified GTAs that competed later in European and Trans-Am events.

TZ2s continued to race in smaller events for some years after their heyday, and their survival rate is impressive—especially considering the depredations often visited upon obsolete competition machines; according to most sources, at least eight of the original dozen still exist.

After its days with Autodelta and the Jolly Club, the TZ2 that Lyon now owns was acquired by a private owner in Italy. He sold it to a U.K. collector. In 1974 the car came to the United States, where it was raced again. Fifteen years later, a Japanese collector bought the car; Lyon purchased the car from him in 2007.

The Alfa had its original engine and many other original components when Lyon added it to his fleet, which includes the aforementioned Porsches as well as a 1927 Bugatti Type 35B. But because it was showing signs of age, he sent it to the shop of noted restorer Phil Reilly for a careful once-over. Ultimately, that safety check became a full restoration intended to return the TZ2 to its 1966 Targa Florio form.

The only modification that Reilly made aside from installing a proper roll cage will be understandable to any Alfa driver: He altered the left seat mounts so that the 6-foot-plus Lyon could find a remotely comfortable driving position in the cramped cabin.

Reilly has assembled a duplicate of the original engine, which will power the car when Lyon races in it. But he did not alter the most recognizable attribute of this or any classic Alfa: its noise. The howling that the Gran Turismo designers recorded and game players now hear sounds the same as it did in the TZ2’s heyday.

Two Other Alfas of Interest

While the TZ2 may be one of the most valuable postwar Alfa Romeos, the list of sought-after cars from the Italian marque is long. Among the more collectible models are the Freccia d’Oro (Golden Arrow)—Alfa’s first postwar car—and the 1970s-era Montreal.

Based on the existing 6C 2500, the Freccia d’Oro was a luxury tourer with a sleek Art Deco design. Unlike many Alfas of that period, the Freccia d’Oro bore coachwork designed and built in-house. Alfa offered three variants—Sport, Grand Touring, and SS—none of which, despite their performance-related names, were road burners. Their 2.5-liter, 6-cylinder twin-cam engines developed only 90 hp to propel 3,400 pounds of car. Economic conditions in Europe suppressed demand for the relatively pricey Freccia d’Oro, dictating that Alfa Romeo build only 680 from 1946 to 1951, when production ceased. Fewer than 100 examples are believed to have survived. Today, a Freccia d’Oro can range in value from $75,000 for one in good shape to $140,000 for a concours-ready car.

Newer and more accessible to collectors, the Montreal derived from a show car that debuted at Montreal’s Expo 67 world’s fair. Alfa Romeo produced the car from 1970 to 1977. Its then-fashionable and dramatic straight-edge Bertone body was draped over a modified GTV chassis. But the best part of this GT car was hidden under the hood: The 200 hp, 2.6-liter quad-cam V-8 engine, based on the one that powered the sensational 33 Stradale, gave the Montreal a top speed of 140 mph. Many of the 3,917 Montreals built have survived and can fetch prices ranging from $25,000 to $65,000.