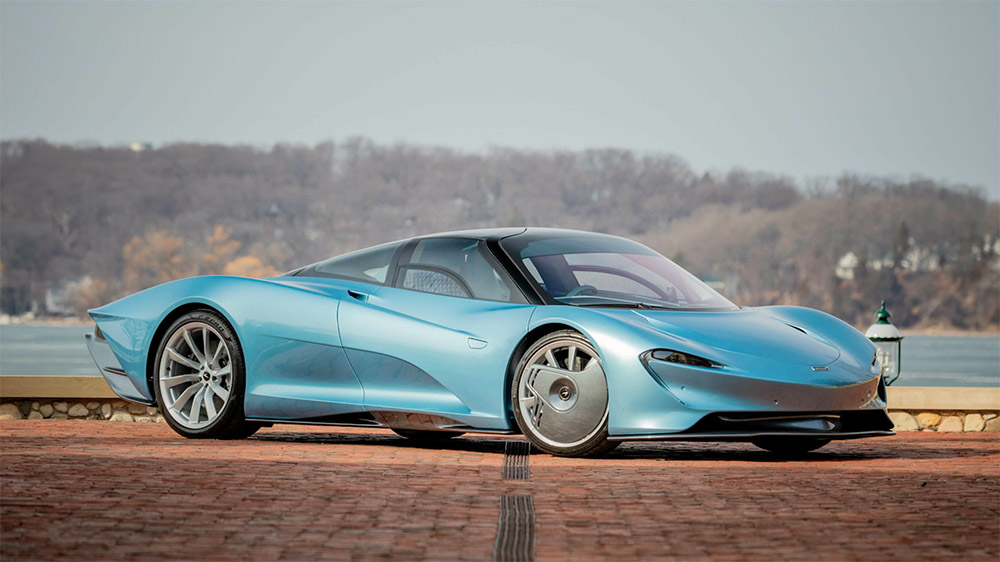 One of the best aspects of the car auction scene is that it gives serious collectors another shot at their dream vehicles.

Take, for example, the ultra-rare 2020 McLaren Speedtail. The hybrid hypercar was next to impossible to snag after it was announced, but now, thanks to Mecum Auctions, you’ll get a chance to add to your garage an example that’s barely been driven.

Introduced in the fall of 2018, the Speedtail is just the fourth member of McLaren’s Ultimate Series, following in the footsteps of the now-legendary F1, P1 and Senna (and pre-dating the Elva). The brand’s first “hyper-GT” was designed to be “a pure fusion of science and art in automotive form,” something best seen in its signature elongated carbon-fiber body. The car’s futuristic look wasn’t just meant to turn heads—though it certainly does just that—but to help it cut through the air with as little resistance as possible. It was also exclusive, with just 106 produced at the marque’s factory in Woking, England.

This particular example was the 87th to roll off the line back in 2020. The striking vehicle, which features a set of dihedral doors, is finished in a beautiful coat of Heritage Gloss Steel Blue and rides on a set of Gloss Silver wheels with front drag-reduction covers wrapped in Michelin P-Zero tires. Inside, the cabin and its three seats are done up in matching Semi-Aniline Metallic Blue Silver leather accented with subtle splashes of McLaren’s trademark orange. Up front you’ll find a suite of five displays that’ll make the driver feel like they’re in the cockpit of a fighter jet.

Just as noteworthy is the car’s hybrid powertrain. At its heart is a 4.0-liter twin-turbocharged V-8 mated to a 7-speed Graziano dual-clutch transmission that can generate 746 hp and 590 ft lbs of torque. The brawny mill is aided by a parallel hybrid system eMotor that boosts overall production to an astonishing 1,055 horses and 848 ft lbs of twist. When pushed to its limits, the car can rocket from zero to 60 mph in 2.9 seconds on its way to a top speed of 250 mph, easily making it McLaren’s fastest production vehicle. This example has total just notched just 275 miles since it was delivered, so it should be able to perform like new.

Inside the 2020 Speedtail  Mecum Auctions

This Speedtail is set to hit the block on Wednesday, May 17, as part of Mecum’s Indy 2022 sale. The auction house expects it to sell for between $2.8 million and $3 million. That’s more than its original $2.6 million sticker price, but considering how rare the vehicle is, that’s only to be expected.

Check out more photos of the Speedtail below: