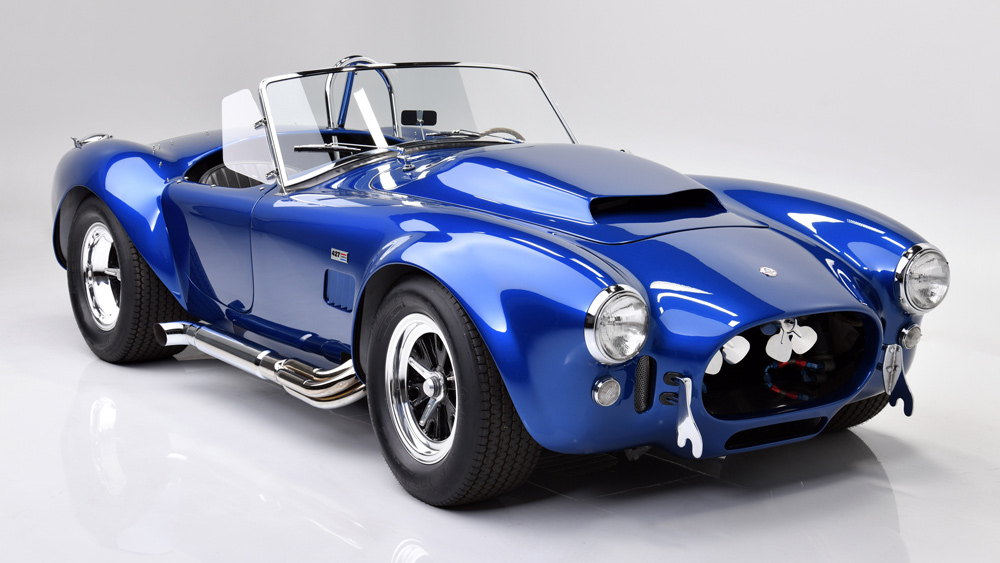 Carroll Shelby’s personal Super Snake is a Cobra that is indisputably one of the most important and collectible Cobras of them all. Of course, any Shelby Cobra is desirable, whether it’s powered by a Ford 260-, 289-, 427- or 428-ci V-8 engine. After all, just shy of 1,000 examples were produced from 1962 into 1967. Whether small- or big-block, each has its charms, though no one will pretend that a genuine 427-powered Cobra isn’t the hairiest handful of them all.

This particular Shelby Cobra, a 1966 427 Super Snake, is not only important because of its staggering performance, but also because of its rarity—it’s one of two built, is the only one surviving and, as mentioned, was owned by Carroll Shelby himself. It’s also being offered at Barrett-Jackson’s Scottsdale Auction to be held March 20 through 27.

Serial No. CSX 3015 began as one of only 23 examples of the Shelby 427 Competition Roadsters built. It was originally shipped and invoiced to Ford Advanced Vehicles in England on September 7, 1965, together with another 427 Cobra Competition and two R-model Shelby G.T.350s, to do a promotional tour in Europe. A year after its return to the United States in 1966, CSX 3015 was transformed by Shelby American into the Super Snake—Shelby called it the “Cobra to End All Cobras”—and reclassified it as a 427 Cobra Semi-Competition (SC).

Only two Super Snakes were ever made, the second originally belonging to comedian Bill Cosby.  Photo: Courtesy of Barrett-Jackson Auction Company.

That distinction turned the former track-only car into a street-legal automobile, adding bumpers, a windshield and so-called mufflers. Truth be told, many SCs saw track duty, and those owners who pressed an SC into road service had quite a beast with which to contend. What made the Super Snake especially venomous was that it carried nearly double the power of a stock Cobra 427, due in part to two Paxton superchargers under the bulging Super Snake hood. The original four-speed manual gearbox couldn’t withstand the added power and torque of the engine, so Shelby had it swapped out for a three-speed automatic transmission in order to put all that power to the ground.

Only two Super Snakes were made: one for Shelby himself, and one for Shelby’s friend, comedian Bill Cosby. After only one drive, Cosby returned his car, terrified by its power and aggressive manners (irony noted). Even though he’s not laughing now, Cosby paid homage to the car in his 1968 comedy album 200 MPH, devoting a skit to the Super Snake. Unfortunately, that car, CSX 3303, was accidently driven into the Pacific Ocean by its eventual owner.

With a brace of superchargers that spooled like the world’s fastest fishing reels, the 2,550-pound Super Snake catapulted from standstill to 60 mph in just a tick over 3 seconds. And that was in an era where a 6-second time was nearly unheard of. When Barrett-Jackson first sold the car at auction in 2007 (setting a record for a Shelby at $5.5 million), Carroll Shelby himself accompanied the car on stage and relayed how he once got pulled over by the Nevada Highway Patrol doing 190 mph.

The car was last sold in 2015.  Photo: Courtesy of Barrett-Jackson Auction Company.

Unlike some Cobras with stories and “excuses,” CSX 3015 has unimpeachable pedigree and an unbroken chain of ownership. It was purchased from Shelby by singer-songwriter Jimmy Webb in 1970. After two decades, the IRS seized the car and sold it at auction to Chris Cox, who sold it to Richard Scaife in 1998, but then re-acquired it in 2006. Ron Pratte acquired the car in 2007, setting the aforementioned world-record auction price at Barrett-Jackson. The current owner acquired the car in 2015. The big question now: Will this be the first Cobra 427 to strike eight-figure territory?