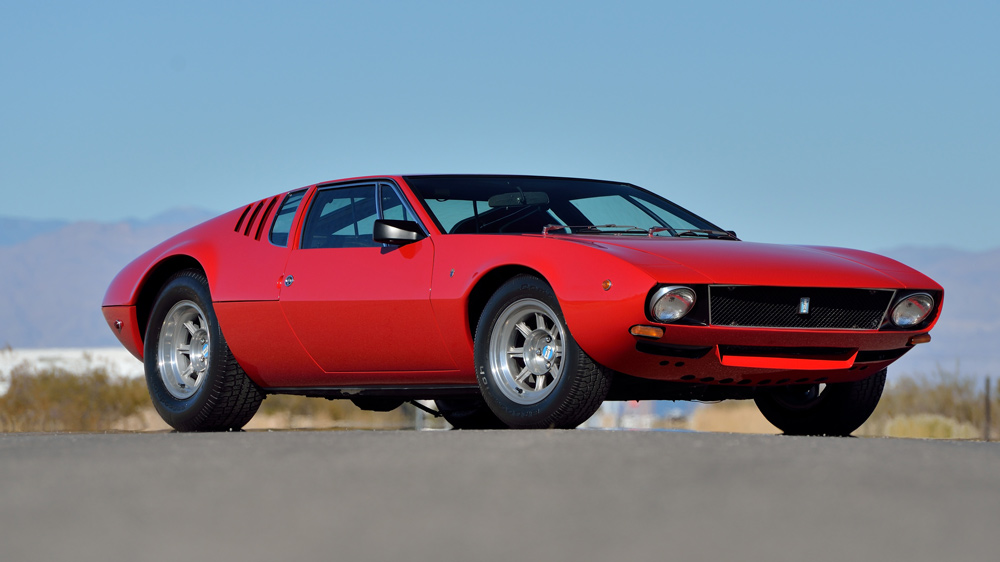 Those with more than a passing interest in collectible automobiles, and with time to spend on this website, may have noticed a weekly installment here—recently initiated— that highlights specific collector cars currently being offered at auction venues or by dealers around the world. My true confession is that, armed with sufficient knowledge to be dangerous but scarcely more than that, this writer has—of necessity—gravitated to cars which are of personal interest, and which, hopefully, might likewise command the attention of a broader and more well-informed audience.

It’s no secret that the automotive landscape is plentifully populated with blue-chip cars—like a Midwest plain with buffalo shoulder-to-shoulder, circa 1860—ranging from Gullwing Mercedes to Blower Bentleys. But now and again, an unusual outlier merits attention, if only because its aesthetics, engineering, provenance or perversity elevate it to the status of cult object. The De Tomaso Mangusta is one such car.

My irrational attraction to the Mangusta is twofold.  First, it is one of the outstanding stylistic expressions of the late 1960s to early ’70s; secondly, I’m sufficiently intrigued to have owned one for a number of years. The work of a young Giorgetto Giugiaro when under the employ of Ghia, for whom he penned the original Maserati Ghibli, the Mangusta was a well-intentioned but ill-sorted hybrid followed by the infinitely more successful De Tomaso Pantera.

But the Pantera is another chapter we shall dive into at a later point in time. And of course, “hybrid” in no way refers to those battery-assisted, Prius-type appliances, but to the novel solution adopted by accomplished engineers like Giotto Bizzarrini, whose employer Iso couldn’t afford to put exotic Italian V-12s into its A3C or Grifo. Nor could Dual Ghia, France’s Facel Vega, Swiss Monteverdi, and innumerable other marques whose answer to practical power was an invincible American V-8.

Some of the most interesting sports cars and grand GTs of the 1950s, ‘60s and ‘70s—with engines from Ford, Chevy or Chrysler—blew the doors off luxo-competitors, yet their power plants cost less than what a set of Borrani wheel spinners sell for today. The De Tomaso Mangusta started life with a Ford 289 ci V-8 (was there ever a greater American V-8 engine?) that was quickly replaced by Ford’s not-quite-as-good 302 ci (5.0-liter) V-8.

At present, the Mangusta commands particular attention because Mecum Auctions will sell a 1970 example with no reserve during its auction at State Farm Stadium in Glendale, Ariz., on March 19. It will be one of 1,200 vehicles crossing the block from March 18 through 20 at the in-person event.

Like every Mangusta, this particular car is one of only 401 examples made between 1967 and 1971. About 251 of those came Stateside, priced at about $11,000 and imported by Kjell Qvale’s British Motor Car Distributors in San Francisco. The model is affectionately called a “Goose” because the name Mangusta is Italian for “mongoose,” the mammalian arch-rival of the Cobra—a not-so-subtle jab at Shelby’s creation that stuffed a Ford V-8 into a tiny British AC.

That subplot is thick and murky, and there is insufficient space to drive off into a cul-de-sac that explains Carroll Shelby’s snake-bitten involvement with Alessandro De Tomaso over a race car called the P70. De Tomaso was a mercurial Argentine industrialist whose eponymous car company was not the only one he owned. He also bought Maserati in 1975, owned Italian coachbuilders Vignale and Ghia, as well as the perennially marginal but magical motorcycle brands Benelli and Moto Guzzi. But again, those are complicated stories for another time.

Italian for “mongoose,” the name Mangusta is a not-so-subtle jab at Shelby’s Cobra.  Photo: Courtesy of Mecum Auctions.

First shown at the Turin Motor Show in 1966, the Mangusta was in distinct contrast to the other mid-engine Euro-offering of its day: the revolutionary Lamborghini Miura. The Mangusta has always lurked in the shadows of Marcello Gandini’s Bertone masterpiece for Lamborghini, though in fact, the Mangusta’s lines were a sharper, more forward-thinking foregleam of the razor-hewn designs soon to be expressed to perfection by Gandini with his Lamborghini Countach and innumerable one-off showpieces like the Alfa Romeo Carabo.

But none of that mattered in 1966. Look at the Mangusta from profile, front or rear, then raise the gullwing engine covers. With a roofline barely waist-high, the car is as spellbinding today as it was more than a half-century ago. I recall visiting Gerald Wiegert’s design studio in Venice, Calif., in the 1970s to look in amazement at his Vector, then just a prototype. Occupying his space was only one other car: a burgundy metallic Mangusta. That Wiegert’s Vector was arguably the most advanced automobile on the planet at the time underscored, in my mind, the importance of the De Tomaso—a defining masterpiece, then and now.

The vehicle relies on a rear mid-engine configuration for its 230 hp, Ford 5.0-liter V-8.  Photo: Courtesy of Mecum Auctions.

Driving one, however, is an altogether different matter. Henry Ford II reputedly had one shipped to Dearborn, Mich., for his engineers and designers to ogle, but any thought of piloting the car was dashed when Ford’s corpulent CEO could barely squeeze himself behind the wheel. The windshield is so acutely raked that most heads contact the glass even with the snug seat fully slid back on its rails. A person has to really want to drive a Mangusta.

In reference to the model, the term “handling dynamics” is oxymoronic, though dynamic is certainly how to describe the Mangusta when it sets briskly underway. The front end feels light as a feather, and not in a good way. At speeds over 80 mph, one senses that the front tires could become airborne, despite an awkward chin spoiler molded into the gorgeous bodywork. Most of the automobile is steel, though the engine covers are aluminum over a steel tubular frame, a little bonus for your restorer when electrolytic corrosion rears its ugly little bubbles.

The gearshift for the ZF five-speed transmission.  Photo: Courtesy of Mecum Auctions.

The steel-backbone chassis, in all its primitive competence, is a fairly robust structure, and the quality of the Mangusta’s manufacture is on par with any other Italian car of the era, which is damning with faint praise. (Pre-Fiat Lancias were the exception; exquisite Fabergé eggs by comparison). As mentioned previously, the engine was a Ford V-8, which is to say, bulletproof, mated to a ZF five-speed transmission. Rear CV joints can clunk like a washing machine out of balance, and the shift linkage is as precise and confidence-inspiring as a rope suspension bridge spanning Papua New Guinea’s Sepik River. But it will shift and it will go, and make plenty of great engine noises along the way, despite a paltry 230 hp in stock form. Really, more power would be a burden, though a respectable 300 hp is about where most should have been fettled by now.

But none of the above is the point of owning a Mangusta. I had one until 2006, a show-worthy example when many others at the time were really pretty ratty. Only within the past decade or so have values escalated to make restorations remotely worthwhile. The Mangusta is one of those cars that rewards contemplative admiration. I often liken the vehicle to a partner with an irascible personality, barbaric social skills and no reciprocal affection, yet so beautiful that nothing else matters.

Careful observers will notice that the Mangusta can be encountered with either quad headlamps (two fixed lamps per side) or twin flip-up headlamps (a single lamp per side) that raise when illuminated. About 50 examples feature the latter style, in answer to US Department of Transportation headlamp height requirements for American roads, a standard initiated by 1970. Other details, such as folding or fixed seat backs, remind us that these were hand-built cars that changed throughout their production run. A pleasant surprise is air conditioning, which works remarkably well to cool a cabin that can otherwise become a blast furnace in summer, thanks to the expansive windscreen.

Although the majority of Mangustas have quad headlamps, about 50 examples feature single lamps on each side that flip up when illuminated.  Photo: Courtesy of Mecum Auctions.

Nobody buys a 50-year old, 43-inch-tall car for its comfort or practicality. The demand for De Tomaso’s revered model is due to its iconic beauty, at rest or in motion; and because nothing like it can ever be built again. Especially noteworthy is that while this particular Mangusta is estimated to fetch as much as $275,000, it’s being offered without reserve.