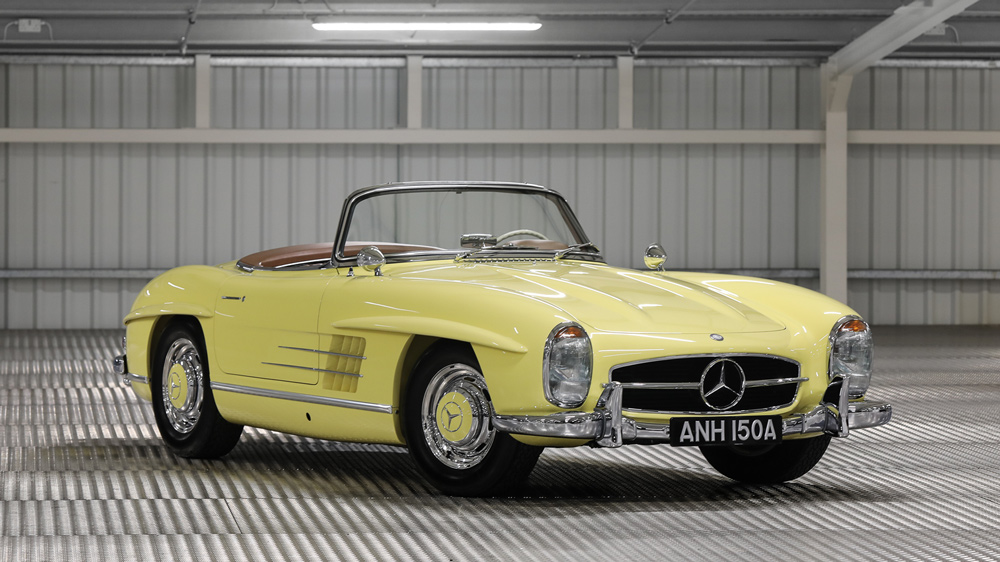 “Nobody gets fired for buying IBM.” That was the mantra of stockbrokers and purchasing agents for decades, when International Business Machines was the titan of its industry and could do no wrong. Its shares were as blue as blue chip could be, and there was a reason the company became an icon of its age. The same could be said for the Mercedes-Benz 300 SL when new, and certainly today. And while “icon” may be the most overused descriptor in the classic car world, if any car were ever deserving of the status, the 300 SL is it—the shining star of the Silver Stars. And, like IBM when that company was on a roll, the Mercedes-Benz 300 SL may be expensive, but it’s as good as gold.

Gooding & Company is presenting nine very special cars in its Geared Online—European Sporting & Historic Collection Sale, held from January 28 through February 5. Gooding’s Mercedes-Benz 300 SL Roadster is a stand-out lot, not just because of its original, specially ordered paint color Bisquitgelb (Biscuit Yellow, DB 648) and Cognac leather interior, but because it represents one of the very last cars off the 300 SL line.

Equipped with Dunlop four-wheel disc brakes, it’s also one of the 209 examples to feature an aluminum alloy engine block. Before March of 1963, all 300 SL engines used a cast-iron block with aluminum heads, but Mercedes-Benz, always looking forward, decided to employ this ambitious technology to its final run of luxurious 300 SL Roadsters.

The factory-original alloy engine block for this car was replaced by the currently installed unstamped block, a correct alloy unit, early in the car’s lifetime. This was a common procedure, as the factory replacements addressed structural weaknesses revealed when the originals were driven under stress. Marque experts estimate that 100 to 150 of the 209 aluminum originals were replaced in period. Restored in Germany, chassis No. 198.042.10.003243 is one of only 26 Roadsters actually built in the final model year (most 1963 models were manufactured in late 1962). It is accompanied by a black removable hardtop, chocolate-brown canvas soft top as well as fitted luggage that’s color matched to the interior.

The leather interior is draped in the color Cognac.  Photo by Mathieu Heurtault, courtesy of Gooding & Company.

To understand the allure of the 300 SL, a little history lesson will help to put things in perspective. Like all German automakers in the early 1950s, Mercedes-Benz was still recovering from the devastation of World War II, and staked its postwar reputation on a race car that took motorsports by storm. That car, the W194, evolved into the street-going 300 SL, launched in 1954 and developed at the urging of Stateside Mercedes-Benz importer Max Hoffmann, the most creative of automotive marketers who also fathered the Porsche 356 Speedster and BMW 507—icons all. A New York showroom designed by Frank Lloyd Wright set the stage for the otherworldly “Gullwing,” whose shape and performance was light years ahead of fuddy-duddy sports cars like some from the UK that still had outboard fenders and running boards.

Made from 1954 to 1957, the 300 SL coupe was built like a tank and featured a brilliant 3.0-liter, straight-six engine that produced about 215 hp in street form. The engine was lubricated by nearly 12 quarts of oil fed by a dry sump, its copious thirst for fuel slaked by Bosch mechanical fuel injection—a system as advanced as a nuclear power plant in its day.

Shifting was by way of a four-speed manual transmission. The elaborate tube chassis was a work of art, as any modern-day restoration that takes one of these cars down to the bare frame will attest: plan to spend up to $1 million if you dive down to the last nut and bolt.

Its chassis and mechanicals were draped with slippery bodywork and made famous by upward-raising doors that spread like wings. That it earned its moniker in reference to those flying rats called seagulls seems unfortunate, but a Gullwing by any name remains as sweet. Over four years, a total of 1,400 were made, and of those, about 1,200 were still around by the end of the 20th century.

But those Gullwings were complicated cars, with a “cozy” interior that could be occupied only after negotiating a wide door sill, pivoting the steering wheel on its hub 90 degrees away from the dashboard and dumping into a snug bucket seat. Exiting was even more challenging. On hot days, the cabin, with all its fenestration but with side windows that could not be lowered, became an oven, driver and passenger sweating like two chickens in a Costco rotisserie cabinet.

The dash in detail.  Photo by Mathieu Heurtault, courtesy of Gooding & Company.

With Gullwing sales slowing, and inspired by the California convertible market, Mercedes-Benz changed over coupe production to its new 300 SL convertible replacement in May 1957, and through 1963 (actually, three special orders trickled out of Stuttgart in 1964) the automaker manufactured 1,858 examples of the 300 SL Roadster, with almost 1,500 remaining today.

The car is exponentially more user-friendly than its coupe counterpart, and while it still has wide sills to negotiate, its doors are recognizable as such, and roll-up windows allow air circulation with the soft-top raised or optional hard-top in place. And when the top is down, the 300 SL Roadster is as delightful a ride as can be imagined. In fact, it may be the single most “modern” and usable classic from the era, and certainly recommends itself for long-distance rallies and road trips where a Gullwing, or most high-strung Italian exotics, wear thin in the comfort, noise or reliability department.

Curiously, while 300 SL coupes have historically commanded more than the convertibles, the usability factor of the latter argues in its favor. From a mechanical perspective, the Roadster brought improvements too, by way of more power—about 240 hp—and a revised rear swing-axle. By March of 1961, disc brakes were adopted, and importantly, the Roadster had a real trunk, which could be filled with special fitted luggage.

The 300 SL Roadster comes with roughly 240 hp and a top speed in the neighborhood of 140 mph.  Photo by Mathieu Heurtault, courtesy of Gooding & Company.

Both models of the Mercedes-Benz 300 SL present a valuable case study in what makes a car collectible. To be a top choice, reliability and real-world functionality are key. Here, both 300 SL models are brilliantly engineered and among the best-made, highest-quality cars of the 1950s. The Roadster gains extra points for being so comfortable and easy to drive. Additionally, the 300 SL isn’t a temperamental, high-revving hand grenade waiting to explode, yet it has plenty of power and braking to keep up with modern cars.

Another important factor in the collectability equation is quantity. Neither too few, nor too many, of either model were manufactured, and this ensures that there will always be a handful of good examples for sale at any given time, in any part of the world. This keeps them on enthusiasts’ radar as popular additions to collections where a practical classic is always welcome. And yet they were not so plentiful that they threaten to flood the market, as was the case with early Porsche 911s a few years ago when prices entered the lunatic realm and reality finally had to splash some cold water on an overheated market.

The tool kit and roadside jack that accompanies the car.  Photo by Mathieu Heurtault, courtesy of Gooding & Company.

About the only downside with the 300 SL is that either model presents a seven-figure barrier to entry, and woe be unto those who decide to pay real money going in and then undertake a quality restoration on top of the initial price of admission. But admission gains entry to just about any classic event or car show on the planet, and while not likely to draw crowds as might a coach-built Italian one-off, neither is a 300 SL likely to leave one stranded on the concours lawn or—more likely—by the side of the road while taking it out for a Sunday drive.