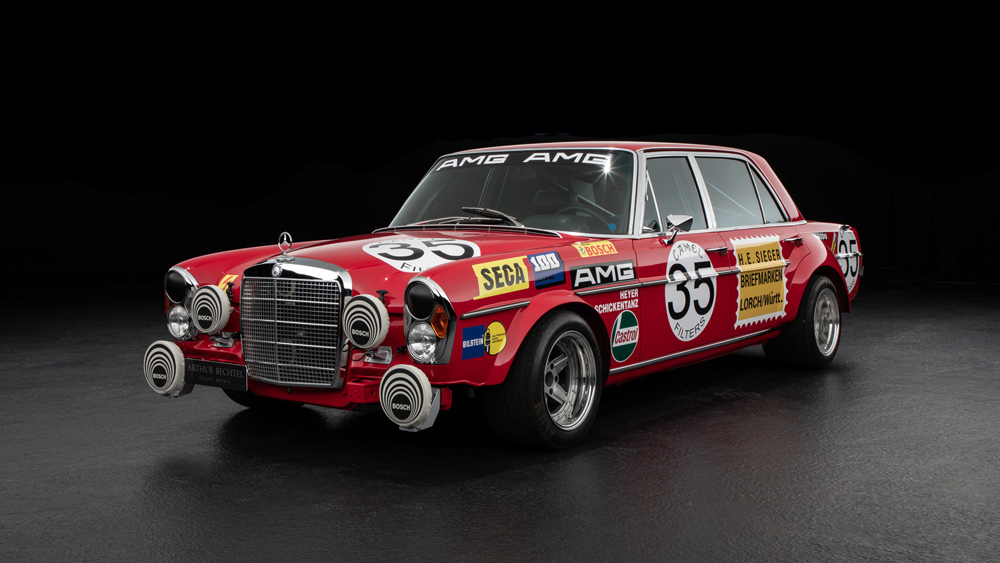 After watching NativeFour’s recent short film by Cameron Thuman—The Spirit of AMG: The Silber-Sau, we commenced combing the internet for a 300 SEL 6.3, the first true performance sedan from Mercedes-Benz. Predictably, there are always a handful of these big Benz four-doors for sale around the world at any given moment, but adopting one of these cars into the family is not for the faint of heart, and most have real needs after all these years.

Made from 1968 to 1972, the 300 SEL 6.3 (model series W 109) was as capable as it was complex. Its mission was fast Autobahn cruising while ensconcing its well-to-do owner in leather, wood and—for the time—the fullest expression of Mercedes-Benz luxury short of the 600 line. It shared that limousine’s powerful V-8 engine (in Mercedes-speak, the M100) that made about 247 hp, an impressive number in 1970.

It also impressed with performance, reaching 60 mph from standstill in about 6.6 seconds, cruising all day at 125 mph and reaching a top speed of almost 137 mph. At 3,891 pounds, it was a substantial car, though fairly lightweight in comparison to current luxury sedans. The 300 SEL 6.3 featured then state-of-the-art systems like fuel injection and an elaborate air suspension that offered the pinnacle of ride comfort. However, eye-watering expense accompanies the suspension’s failure, slamming the stately 300 SEL to the ground like a lowered ’64 Impala.

But then we started wondering, what if, instead of a bone-stock original, we could have a hot-rod 300 SEL 6.3? Naturally, it would be in the spirit of the original competition car built by AMG to compete in the “other” annual endurance race, the 1971 Spa Francorchamps 24 Hours, held in Stavelot, Belgium since 1924.

Today, AMG is a household name for any follower of Mercedes-Benz performance cars. But in the 1970s, AMG—named after its founders Hans Werner Aufrecht, Erhard Melcher and Aufrecht’s birthplace Großaspach—was not yet a subsidiary of Daimler AG. In 1970, Aufrecht built a touring race car; the first in AMG’s history. Nicknamed “Red Pig,” it was clearly one that could fly. Kicking out the stops on the stoic 300 SEL 6.3, the AMG racer used the 6.3-liter V-8 bored out to 6.8 liters, upping the output to about 420 hp.

In addition to various chassis improvements, that car featured aluminum doors and huge fender flares to accommodate deep 15-inch rims and racing rubber. The interior was strictly business, with a manual gearbox replacing the languid automatic and a full roll cage in the event the world went belly up. So accomplished was the transformation that the Red Pig—starting fifth on the grid and battling against far lighter and more agile competitors—took first in its class and second place overall.

Sadly, like so many competition cars, the Red Pig did not survive. As if trotting off to the sausage factory, it was subsequently sold to the French firm Matra. Pressed into service testing aircraft tires, it was destroyed in the course of its ignominious duties.

The 6.3-liter V-8 engine is responsible for 250 hp and 369 ft lbs of torque.  Photo: Courtesy of Arthur Bechtel Classic Motors.

But you can’t keep a good pig down, and the noted Mercedes-Benz specialists Arthur Bechtel Classic Motors in Böblingen, Germany, cloned the classic racer for a client. Starting with a Mercedes-Benz 300 SEL just as AMG did in 1970, Arthur Bechtel Classic Motors modified and equipped it with the technical and visual features of the original Red Pig.

The creation is an exacting replica that originally sold in a Korean auction and subsequently at the RM Sotheby’s Paris sale in February 2020 for the equivalent of nearly $521,000. The Bechtel team now produces four Red Pigs a year, sourced from suitable 300 SEL 6.3 donors. Build time is about nine months, with the car delivered Stateside at a cost of $400,000. Anyone who has ever built a hot rod (or a restomod, for that matter) knows that the devil is in the details, and those details can take years and hundreds of thousands of dollars to iron out. In the scheme of things, this car seems almost a bargain.

With a displacement of 6,332 cc, the motorsport tourer makes about 250 hp, and according to CEO Tim Bechtel, “gives a real racing feeling.” Period-correct racing equipment from AMG adds the final touch, and because the car undergoes a complete restoration, customer specifications can be implemented during the course of the project. For instance, the buyer can spec a six-speed Getrag manual gearbox (which would be our choice), or the original automatic transmission. They can also choose between a sports suspension or the original air suspension system. The vehicle currently under restoration, serial number 10038, can be finished to similar specification as Bechtel’s first Red Pig, for those drivers who want a Mercedes that won’t be mistaken for any other.