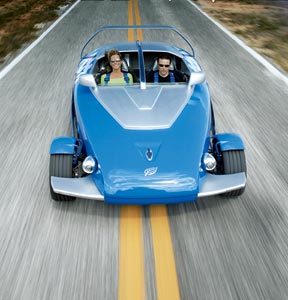 Some years ago, an entrepreneur wrote a two-page note to the Smithsonian Institution on his company’s letterhead. It was the type of letter that the Smithsonian often received, requesting information relevant to a project the sender was interested in pursuing. “I am an enthusiast,” the writer scribbled, “but not a crank in the sense that I have some pet theories as to the proper construction of a flying machine.”

A crank was exactly what friends and family called Wilbur Wright, encouraging him and his brother to focus on the bicycles they fixed for a living and abandon their flying-machine folly. A century later, Orville and Wilbur Wright’s modern-day counterparts are often confronted with the same type of derision and skepticism. Acquaintances roll their eyes and investors snap their checkbooks shut when these people launch into discourses on their iterations of the Next Big Thing. “When I introduce myself to some people, it’s like I came from Mars,” says Paul Moller, founder of Moller International and creator of the M400 Skycar, a vehicle that, upon its completion, will double as a car and a vertical-takeoff aircraft. “It’s like an alien just landed. They shrivel up and slink off.”

Such is the burden borne by so many inventors, who are often regarded with as much suspicion as are their creations. “Many people say accusingly, ‘I consider you crazy,’ ” says Frank Rinderknecht, CEO of Rinspeed and creator of the Splash, a one-off sports car that also operates as a hydrofoil watercraft. Then Rinderknecht adds, “For me, to be called crazy is a compliment.”

Tom Gage, president of AC Propulsion, hears those same accusations of insanity when he asserts that the Tzero, his company’s electric vehicle, can outrun a Porsche 911 Carrera. But in 2000, skeptics fell silent when the zero-emission two-seater rocketed past the iconic sports car in a drag-strip test, accelerating from zero to 60 mph in 3.6 seconds. Yet AC Propulsion, which has completed three of the roadsters and is working on a fourth (two are now privately owned), does not plan to produce any additional Tzeros, although it is negotiating with two manufacturers that are interested in bringing a version of the car to market. Instead, the company has redirected its focus to perfecting its electric drive system and converting Scions, the auto brand recently launched by Toyota, to electric power.

While high-volume production of the Tzero was AC Propulsion’s original intent, the cost of building the car proved prohibitive. The production price, however, is but one of the obstacles that confronted the company. Auto manufacturers, once smitten with the prospect of mass-producing electric cars, instead are now concentrating their R&D efforts on hybrids and fuel cell vehicles as alternatives to the traditional internal combustion engine. General Motors, which had developed the EV1 electric car in the 1990s, now points to the vehicle’s failure as proof that drivers will never accept the low power, limited range, and recharging time associated with electric cars.

Gage believes the Tzero addresses these concerns. As previously noted, the car can sprint faster than a Porsche, and Gage claims that when plugged into a source with sufficient power output, the Tzero can be fully recharged within three hours. It also has a range of 300 miles, thanks to lithium-ion batteries that AC Propulsion installed last year; previously, when it ran on lead-acid batteries, the Tzero could travel no farther than 80 miles before it required recharging.

Still, most drivers will remain unconvinced that the Tzero or any other electric car is a viable form of transportation. The traditional belief is that a car must have the capacity to travel from 300 to 400 miles without refueling and be capable of completing long-distance trips without prolonged stops. Such sentiments are nonsensical, say Gage. “Most people drive 30 to 50 miles a day,” he notes. “A car with a 100-mile range or even less can meet an average driver’s needs nine days out of 10. They can work, shop, or do business while the car is charging. Our objective is to make cars that suit most people’s needs on most days.”

While AC Propulsion and other electric car builders attempt to alter the prevailing perception about driving needs, Moller International is trying to introduce an entirely novel method of transportation. For several years, the company supplied NASA, the U.S. Navy, the Defense Advanced Research Projects Agency, and other government agencies with designs for engines and unmanned vehicles. Four years ago, however, Moller believed he had reached a breakthrough when the navy considered using the Skycar as a military vehicle. Then after several informational meetings, navy officials delivered the bad news: The Skycar was too advanced. “ ‘We fund only fundamental stuff,’ is what they told me,” Moller recalls. “That was a shock to me.”

It was not the first time the company was spurned by potential investors—and it likely will not be the last. Beginning in 1992, Boeing spent two years and half a million dollars conducting an extensive study on the Skycar. According to Moller, the aviation giant concluded that the Skycar would complete a continental flight faster than a jet because of the inefficiencies of the commercial aviation industry’s hub-and-spoke system. However, Boeing ultimately rejected funding Moller because it could not quantify the Skycar’s potential market and did not want to launch a separate division to design, manufacture, and brand the vehicle.

On at least one occasion, Moller played the role of the rejecter. He recently turned down a multimillion-dollar funding deal with Singapore Technologies, an international technology conglomerate, because the Malaysian company wanted too large a stake in the Skycar. “We’re not going to sell our soul to the devil for a couple million dollars,” Moller says.

Like other entrepreneurs, Moller, who drew inspiration for the Skycar by observing hummingbirds, relies on angel investors to bankroll the development and production of his machine. He recalls a Swedish electronics executive who, after hearing about the Skycar, sent a check to Moller to purchase $500,000 worth of shares in the company. Two weeks later, another $500,000 check arrived from the same person. “There are many individuals like that around the world,” Moller says. “They have done that kind of thing in critical times. The company would have gone under.”

However, inventors throughout history have learned that relying on outside investors can be a fickle proposition. Moller estimates he has spent $200 million of his own money during his 40-year quest to bring the Skycar to life, meanwhile building—as many of his counterparts have done—other, more marketable inventions to further fund his dream vehicle. Moller is the creator of the SuperTrapp muffler, an aftermarket device available for high-end cars and motorcycles, and he has also made money developing real estate in California. Moller International is currently designing four-stroke rotary engines for handheld power tools. Versions of these engines might someday propel the Skycar.

Rinspeed employs a similar strategy. To fund the construction of the Splash, the company used the profits from its core business of tuning cars such as the Porsche Cayenne Turbo and the BMW M5. Rinderknecht has no intention of selling the Splash for a profit and does not believe his company could ever manufacture production versions of the water-going car. However, the Splash has generated valuable publicity for Rinspeed, including a Good Morning America feature. At the same time, Rinspeed’s reputation of producing exotic aftermarket vehicles has helped to legitimize the Splash, just as Moller’s success in manufacturing engines and mufflers makes the Skycar more difficult to dismiss.

For all the attention that these floating and flying cars have drawn, they are still one-off creations. To realize a return on their investments of time and money, the inventors would have to mass-produce their vehicles, which is perhaps their most daunting challenge. It would require sourcing parts, striking deals with suppliers, establishing a pool of prospective buyers, and ramping up production to sell hundreds and thousands of units at affordable prices.

For the Skycar to become marketable, Moller believes, the price of the vehicle must be less than $100,000, which the company could not achieve unless it struck a deal with a manufacturer as well as a primary financial backer. “We can only go forward by finding a partner,” Moller says. “That’s virtually guaranteed. I can’t raise the kinds of dollars to move to a level beyond that.”

Such a prospect seems even more remote when fellow inventor Rinderknecht expresses skepticism about Moller’s creation. “I’ve seen photos of the thing, and it’s certainly not an automobile,” Rinderknecht says of the Skycar. “It has four big fans. This is not what we consider a car.” But he is also quick to praise Moller. “I always and truly admire people who have the courage to be different,” he says. “This is a great gift, and it takes courage. Paul Moller has a totally different approach than us, but everybody has his own visions. There is no good or bad.”

Moller’s vision for the Skycar may be many years removed from reality, but as it stands, the vehicle still has the ability to inspire. The Skycar was on display at a technology event in San Francisco in May, and though the vehicle did not fly or drive, crowds flocked to it. No doubt, when they were still involved in the development stages, the two mechanics from the Wright Cycle Co. would have welcomed a similarly enthusiastic reception for their invention.

‘Between the World and Me’ Adds Mahershala Ali, Angela Davis, Seven Others to Stellar HBO Cast