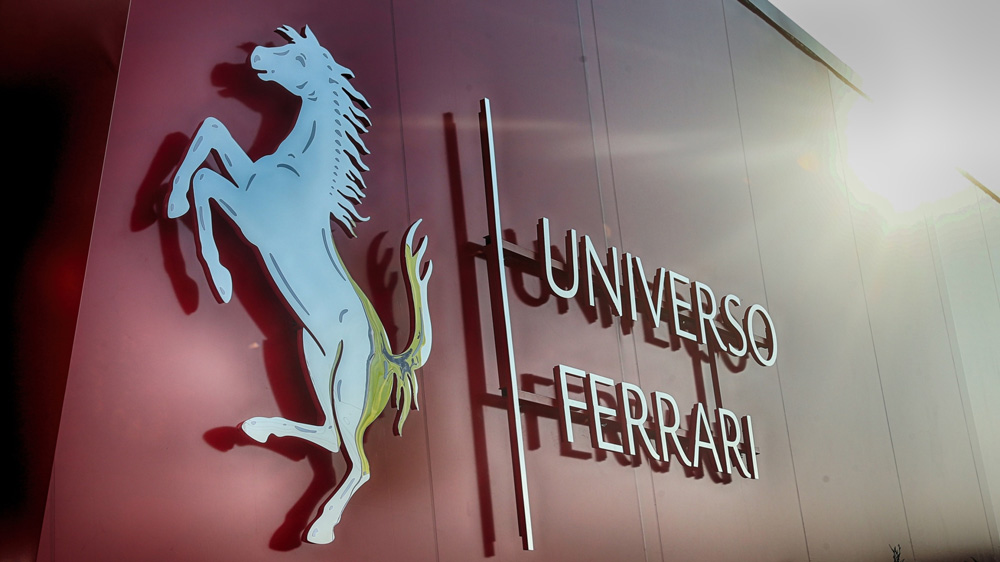 “The Ferrari is a dream,” once noted the Italian marque’s founder Enzo Ferrari. “People dream of owning this special vehicle, and for most people it will remain a dream apart from those lucky few.” But while those words remain true, a chance to look behind the company curtain and come close to its visionary machines is no longer a fantasy—at least for the moment.

For today and tomorrow, along with September 28 and 29, the public will have access to Universo Ferrari, the automaker’s own temporary exhibition alongside its private test track at Fiorano Modenese, close to Ferrari’s headquarters in Maranello, Italy. The marque’s clients and invited guests have had access since the premiere on September 2.

The ultimate room with a view for Ferrari fans.  Photo: Courtesy of Ferrari.

“We expect to have 8,000 people coming here visiting this show and being offered the same experience we offer to our clients,” mentioned Enrico Galliera, Ferrari’s chief marketing and commercial officer, during a recent program for the press. “It’s a way to be more connected than before to the market and client, of course, but also to the fans.”

Entering the vast rectangular building, which is dressed on the outside in familiar red and emblazoned with a large silver Prancing Horse Logo, guests are directed first to a circular room. Inside, one of Scuderia Ferrari’s Formula 1 race cars, the SF90, is the focal point and flanked by a theater screen presenting highlights from the team’s nearly 90-year history, including audio of Enzo himself.

From there, the tour moves into a representation of the Ferrari Classiche facility that restores classic models to concours quality. Showcased here are a 250 GTO, circa 1962, and a 308 GTB with its 1975 Type F106A V-8 engine displayed next to it.

A representation of the Ferrari Classiche restoration facility, including a 250 GTO.  Photo: Courtesy of Ferrari.

Down a small hall is a large area featuring numerous monsters of horsepower and performance. At the epicenter is a spherical space demarcated along the periphery by a translucent curtain that descend from the ceiling like the delicate strands of a jellyfish. Upon the 360-degree wrapping is projected a scenic coastal route. Once inside, attendees come as close as most will ever get to the ideal vehicle to take on such a drive—a 2016 La Ferrari Aperta. Next to it is a 2017 FXX-K Evo, a track car carrying more than 1,000 hp.

On the outside of this veiled enclave are displays of motorsport models like the F310B from Formula 1 and a 488 GTE, along with an actual first place trophy from the 24 Hours of Le Mans.

A winning trifecta of Ferrari racers with a trophy from Le Mans as backdrop.  Photo: Courtesy of Ferrari.

Finishing strong, the exhibition concludes with a presentation of Ferrari’s current production models and examples of the limited-edition Monza SP1 and SP2. With their own dedicated rooms are the latest in the lineup, the 812 GTS and F8 Spider, both revealed a few feet away at the Universo Ferrari’s theater on September 9. Before calling it a day, visitors can browse for specialty souvenirs at the gift shop or watch any action on the famed Fiorano circuit set adjacent.

The Ferrari Monza SP1 and SP2 await at the exhibition’s finish line.  Photo by Viju Mathew.

“What’s behind you doesn’t matter,” Enzo famously quipped. Perhaps, but for the month of September, Ferrari is both looking back at its history and into the future simultaneously. Thankfully, it has decided to share that view with the world.