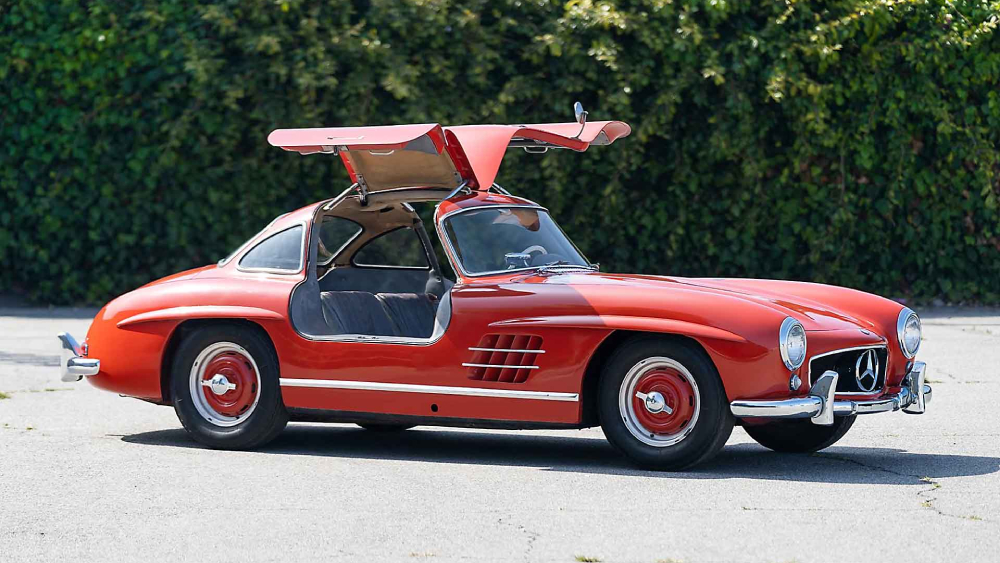 The Mercedes-Benz 300 SL Gullwing has been turning heads since it first hit the road in 1954, becoming a collector’s item along the way. Now, a rare edition from 1955 is about to hit the auction block, and it’s sure to be catnip for auto enthusiasts who enjoy undertaking their own restorations.

Put on the market by firm Gooding & Company for its Gearded Online 2020 showcase, this Gullwing, in particular, was built as a special order US-export model. The exterior was finished in classic fire engine red while the interior was upholstered in muted gray leather. Its chassis is held up by coveted rare Rudge wheels.

Over its 65-year history, the automobile has gone through five owners, all California-based, one of whom was the car’s steward for 40 years. In a moment of serendipity, it once belonged to the family of a current Gooding & Company specialist, Garth Hammers, when he was a child.

A peek at the vehicle’s vintage motorblock.  Courtesy of Gooding & Company

“Riding along to gatherings and rallies as a child is really what solidified the Gullwing as my all-time favorite car,” Hammers told Gooding & Company in a statement. “My family-owned this Gullwing when I was 13 years old and it was the only one we ever had with Rudge knock-off wheels. I was still too young to drive it at the time, but this car made a huge impression on me.”

Besides its original special-order status and limited-edition features, this example is also rare because of its unrestored state. While some may initially perceive that as a drawback, it’s actually a boon for serious collectors. Not only does it mean the new buyer won’t have to contend with any previous subpar restorations; it also means there’s no question about the Gullwing’s original detailing or color palette. Plus, the owner can make tweaks much more easily. The auctioneer believes this may be one of the last unrestored Gullwing’s likely to be found, adding to its already substantial value. Pricing has not yet been released, but a previous (restored) Gullwing sold by the same auction house went for $1.43 million in 2016.

Bidding begins on August 3 and runs through August 7. To learn more, head over to the Gooding & Company website and view more photographs of the car below: