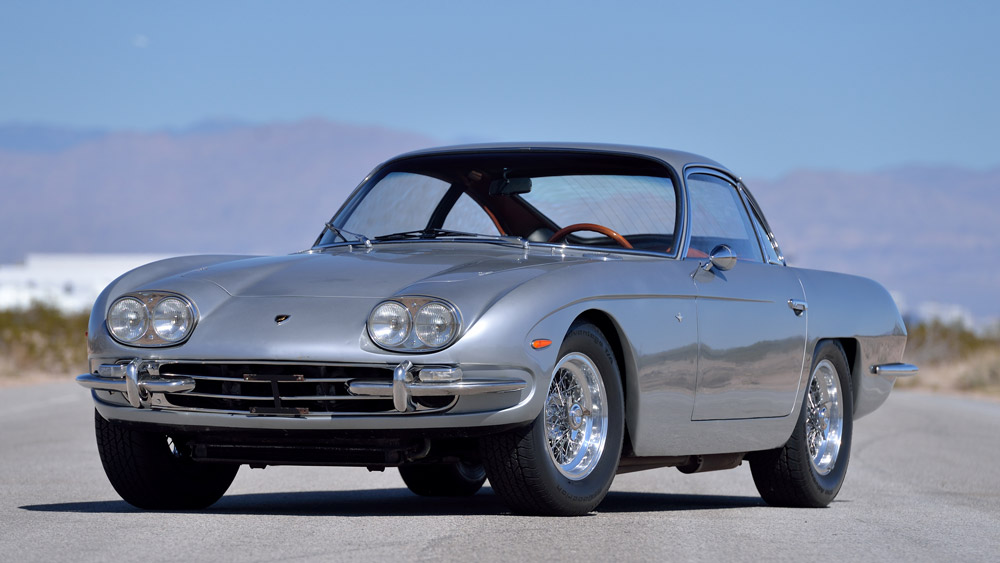 When a dozen vehicles from John Atzbach’s private collection of classic, high-performance sports cars crosses the block during Mecum Auction’s annual Spring Classic in Indianapolis in July, a few of those lots—mostly rare Shelby fastbacks, including a Shelby GT350R Prototype—will command the lion’s share of attention. However, this 1967 Lamborghini 400 GT 2+2—in original condition and with only 28,000 miles on its odometer—should generate some bullish bidding of its own.

As one of the Italian automaker’s earliest road cars (Lamborghini produced fewer than 400 examples of its GT from 1964 to 1968), the 400 GT is widely considered the purest expression of Ferruccio Lamborghini’s grand touring aspirations. In fact, a vast majority of the marque’s enthusiasts today are likely to agree that the 400GT—and the Islero that followed it—are the two models that best capture the essence of Lamborghini grand touring.

The model on offer is one of Lamborghini’s definitive grand tourers.  Photo: Courtesy of Mecum Auctions.

Powered by a 3.9-liter, quad-cam V-12 engine—outfitted with six Weber twin-throat carburetors—the Lamborghini GTs of the mid to late 1960s boasted a more sophisticated powerplant than what Enzo Ferrari’s team of engineers could build just down the road. In fact, the 400 GT, as well as the 350 GT that came before it, significantly outperformed all other European sports cars of the period.

Those GTs benefited from the automaker’s proprietary five-speed, syncromesh transmission; and when that transmission was paired with the aforementioned V-12, their associated GTs delivered adrenaline-inducing amounts of torque at only 1,500 rpm. As some Lamborghini aficionados have described, the 400 GT accelerates “like a steam locomotive” and drives “like a silent rocket ship.”

Given the amount of capital that would likely be required to bring this car up to 100-point, concours-quality condition, it isn’t suited for those who might be seeking a million-dollar, best-in-class contending show car. Nevertheless, this 400 GT 2+2 represents one of the most exciting vehicles of its era—a classic grand tourer that still delivers thrills. In those terms, if someone is looking for the greatest GT of its day, a compelling argument can be made that this Lamborghini is just that car.