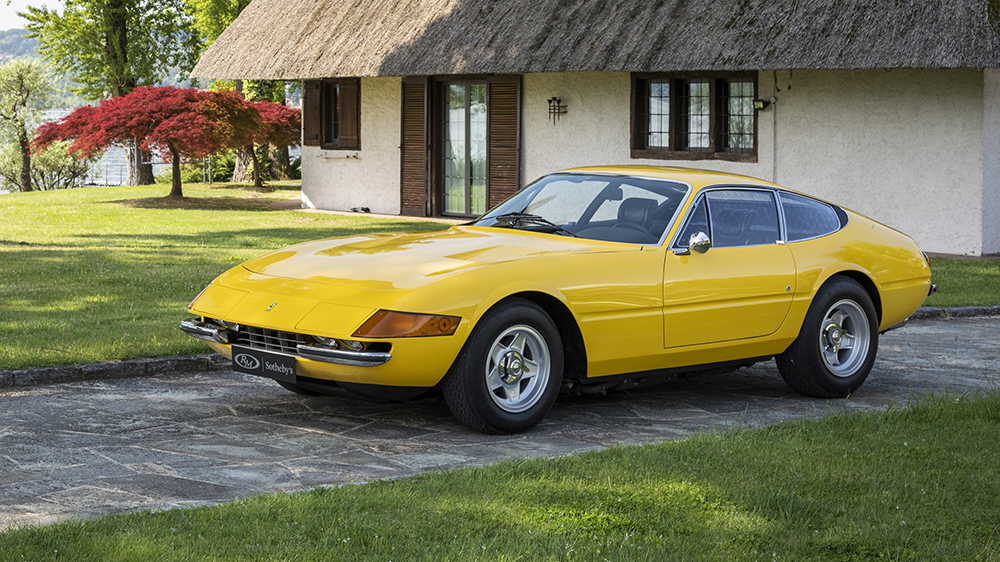 There are few bigger turning points in the history of Ferrari than the 365 GTB/4. After winning the Daytona in 1967, the sporty coupé became the de facto dividing line between the marque’s early days and its modern era. And now a gorgeous, US-spec version of the car is up for grabs.

Next month, a beautifully restored 1973 model of the dazzling speed machine will go under the hammer as part of RM Sotheby’s Milan sale.

First introduced in 1968 at the Paris Salon, the 365 GTB/4 was a wild departure for Ferrari. The car wasn’t just different from its immediate predecessor, the 275 GTB/4, but every other Ferrari grand tourer that had come before it. Although it held on to the long nose that was a trademark of the marque’s previous V-12s, the company’s famous smooth curves were jettisoned for more angular and aggressive design. The result was a car that has more in common with the supercars of today than its peers.

This particular example, chassis no. 16853, began its life finished in Marrone Metallizzato (metallic brown) over beige leather. It would pass through the hands of a number of American collectors during the 1970s and ‘80s, before making its way back to the motherland, where it would be painstakingly restored in the late ’90s by Bacchelli & Villa. As part of the process, the car was repainted in a striking yellow and had its cabin outfitted in black leather. We’re sure the original was a beauty, but it’s hard to imagine it outshone the car in its current guise. As part of the US-spec, it also includes an air conditioner and power windows.

Inside the 1973 Daytona  RM Sotheby's

Underneath the hood, you’ll find one of Ferrari’s famous V-12s. Mated to a number-matching gearbox, the 4.4-liter mill is capable of churning out an impressive 352 horses and 315 ft lbs of twist and pushing the car from zero to 60 mph in 5.4 seconds and to a top speed of 174 mph. It’s unclear how many miles are on the odometer, but the car has the very important Ferrari Classiche certification so you can count on it being in tip-top shape.