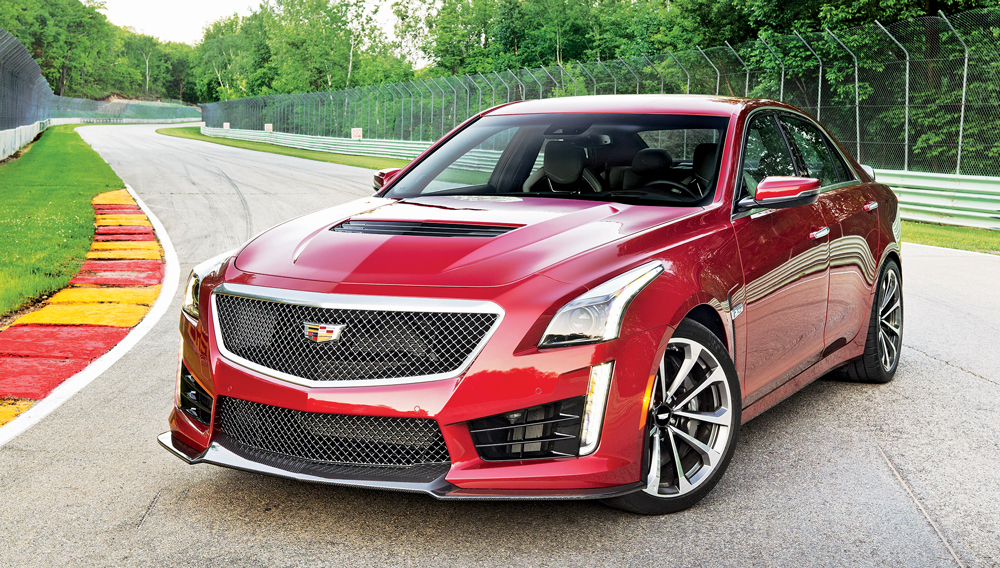 The new CTS-V is the fastest and most powerful Cadillac ever. Equipped with a 640 hp supercharged V-8, the car clocks a zero-to-60-mph time of 3.7 seconds and reaches a top speed of 200 mph. It is only a tenth of a second slower than the 2014 Mercedes-Benz E63 AMG and much quicker than the BMW M5, which reaches 60 mph in 4.2 seconds.

This is the third generation of the CTS-V, which launched in 2004 as the first of the V-Series cars and derives from the CTS. Like the other V models, it is essentially a high-performance variant of the base model packed with race-bred technology. In this case that includes sophisticated aerodynamics and cooling systems and a stiffer chassis that keeps the car more composed around corners.

The car’s $85,000 price is roughly $10,000 more than that of the 207 hp ELR plug-in hybrid coupe—which Robb Report Car of the Year judges blasted earlier this year for its price, deeming it incongruous with the sluggish performance—but far lower than those of any comparably powered sedans from European builders.

Cadillac hosted test-drives this summer at Road America, a 4-mile, 14-turn road course in Wisconsin that includes a long front straight on which the CTS-V reached nearly 150 mph. As the car traveled at that speed, the supercharger produced a satisfying whine accompanied by a loud, low grumbling exhaust note from the quad tailpipes.

The CTS-V’s four drive modes—touring, sport, snow, and track—vary the shift points on the 8-speed automatic transmission. The shifts feel just as fast as on a dual-clutch gearbox, though as with some DCTs, they also can feel abrupt when the car is being pushed hard on the track. The drive settings also affect the ride quality, which, as revealed on runs through a slalom at the track, ranges from soft and pliable in touring mode to planted and unshakable in sport mode. Regardless of the drive setting, the latest version of Magnetic Ride Control, General Motors’ proprietary adaptive suspension system, adjusts almost instantly to keep the car on an even keel.

The Brembo brakes—six pistons on the front wheels and four on the rear ones—will pin you to your seat at the right moments, and they won’t show any fade. The CTS-V’s rotors are the largest of any Cadillac on the market, and the hubs are available in matte red, gray, or gold.

The most obvious visual differences between the CTS and the CTS-V are the latter’s wider grille and larger air intakes, both of which increase airflow into the engine. A bulging vent on the carbon-fiber hood allows hot air to escape and improves downforce. An optional $5,500 carbon-fiber package replaces the standard hood extractor with one made of carbon fiber and adds a front chin spoiler and larger rear spoiler.

As fast and powerful as it is, the CTS-V is still suited to daily driving. To save fuel, its engine will automatically switch from running eight cylinders to four when cruising about town. The cabin is quiet thanks in part to technology that cancels out noise from under the hood. The 20-way adjustable sport seats are covered in leather and available in color combinations such as jet black and saffron. They are also available with optional Recaro inserts.

Another option for owners who plan to bring their car to the track is the $1,300 performance-data recorder, which uses a built-in camera and microphone to record video in front of the car and audio inside the cabin. It is far more elegant than sticking a GoPro on the dashboard.