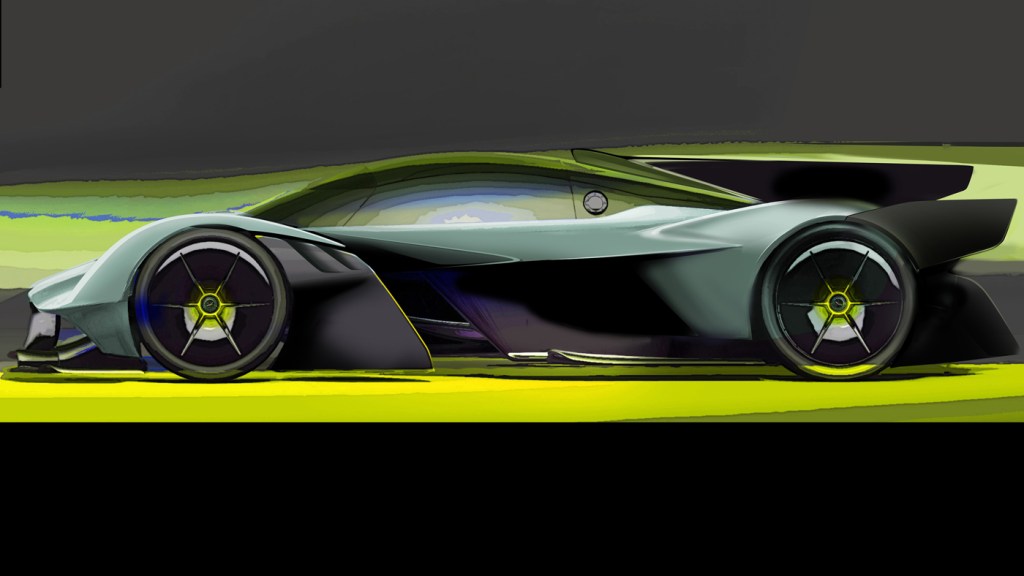 Extreme as the Aston Martin Valkyrie promises to be (an actual running examples doesn’t exist, or at least one hasn’t been presented to the pubic yet), its creator—Formula One race car designer Adrian Newey—was operating under some self-imposed limitations while developing it. Newey, who is the chief technology officer for Red Bull Advanced Technologies, wanted the Valkyrie to function as a true road car.

Nevertheless, it will be powered by a naturally aspirated V-12 that generates at least 1,000 hp. Built mostly of carbon fiber, the car will weigh just over 2,200 pounds (1,000 kilograms), giving it a 1:1 power-to-metric-weight ratio. And the aerodynamic design will enable the Valkyrie to generate 4,000 pounds of downforce. Given those projected performance specs, what, you might ask, would the car be like if Newey wasn’t constrained by street-legal considerations?

The answer is the Aston Martin Valkyrie AMR Pro, the track-only version that Newey developed concurrently with the road-going Valkyrie. According to the British marque, the AMR Pro’s 6.5-liter Cosworth V-12 will generate even more horsepower and more torque than the Valkyrie’s engine, though it hasn’t released official specs for either car. The company predicts a top speed close to 250 mph for the AMR Pro and says it will be capable of achieving lap times that rival those of a contemporary Formula One or LMP1 machine, even though it derives from a fully homologated road car.

The most obvious visual difference between the designs of the two Valkyries are the AMR Pro’s larger front and rear wing elements, which, Aston Martin says, will enable it to generate even more downforce than the road car does. The absence of such niceties as a heater and infotainment screens will make the race car even lighter than the featherweight road car. Additional weight savings will come from the polycarbonate windscreen and side windows, lighter carbon-fiber bodywork, molded race seats (instead of adjustable road-car seats), and an exhaust system that’s not burdened with silencing components.

The AMR Pro will also come with instructions: Owners will be able to participate in a driver-development program that includes time in a racing simulator and on-track lessons.