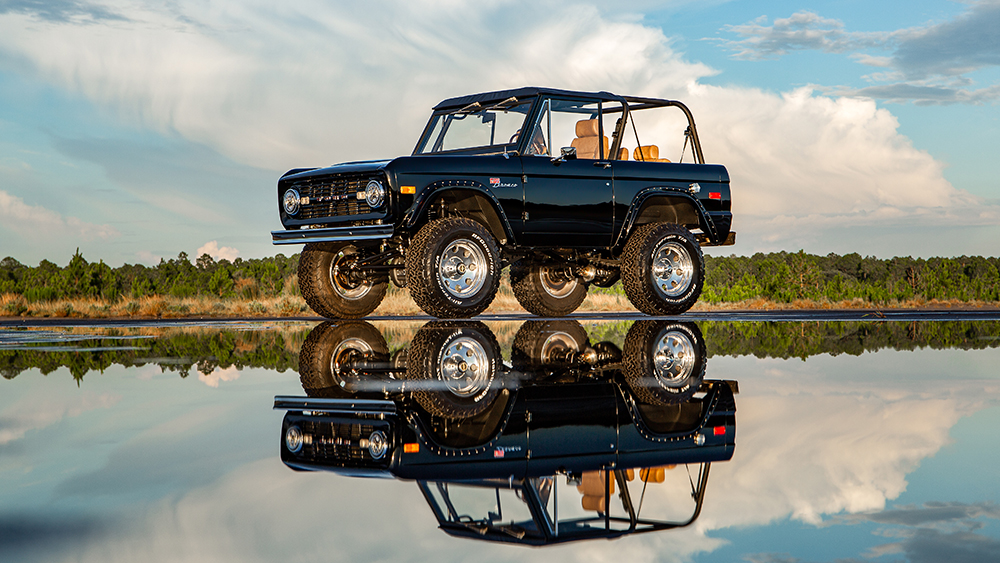 Velocity Restorations has figured out a simple way to cut down on the wait times for its in-demand vintage SUVs: don’t wait for customers. To slake the public’s Classic-car thirst, the Florida-based company just announced that it will now offer not one but two fully finished retrofitted Ford Broncos, both built to spec.

The first two offerings from the new program are a 1968 Bronco finished in PPG Custom Brittany Blue and deep gloss-black 1973 model. They feature similar specifications: Both have had their original engines swapped out for a 430-hp Ford Coyote 5.0-liter V8 crate engine, more than doubling their power. They also feature a 4R70 four-speed automatic transmission and have been outfitted with the company’s very own exclusive serpentine system, with Velocity Custom performance exhaust and headers.

Inside the cabin, both vehicles now feature a slew of modern touches including custom-designed high back front seats, fold-and-tumble rear bench seat, digital gauge cluster, door panels and JW speakers. Rounding out the package are LED lights, Wilwood four-wheel disc brakes, BFGoodrich All-Terrain T/A tires and a four-point roll cage that can be upgraded to a custom-made six-point cage.

Velocity has developed a strong reputation based on the painstaking attention to detail that goes into each of their bespoke restoration projects. To be sure, the process is involved: Following the initial client collaboration and planning process, the company identifies a high-quality donor and then spends weeks preparing it for the build, handling any rust repair and metal fabrication that must be done. It’s only then that the hard work—which includes finishing, assembly, mechanical and upholstery—can begin. Depending on how far the customer wants the company to go, the entire process can last up to a year.

For those that don’t have that kind of time or patience, Velocity’s new spec-built Broncos give customers the chance buy their dream SUV without the wait. Yes, these vehicles may not be fully bespoke, but the company is betting that the restorations will offer plenty of the high-end modifications and upgrades their customers have come to expect.

Both Broncos start at $219,000—much lower than a Velocity custom restoration would normally cost. It’s also less expensive than Icon’s recent refurbished 1969 K5 Blazer Reformer, which goes for $265,000. Check out more photos of the Broncos below: