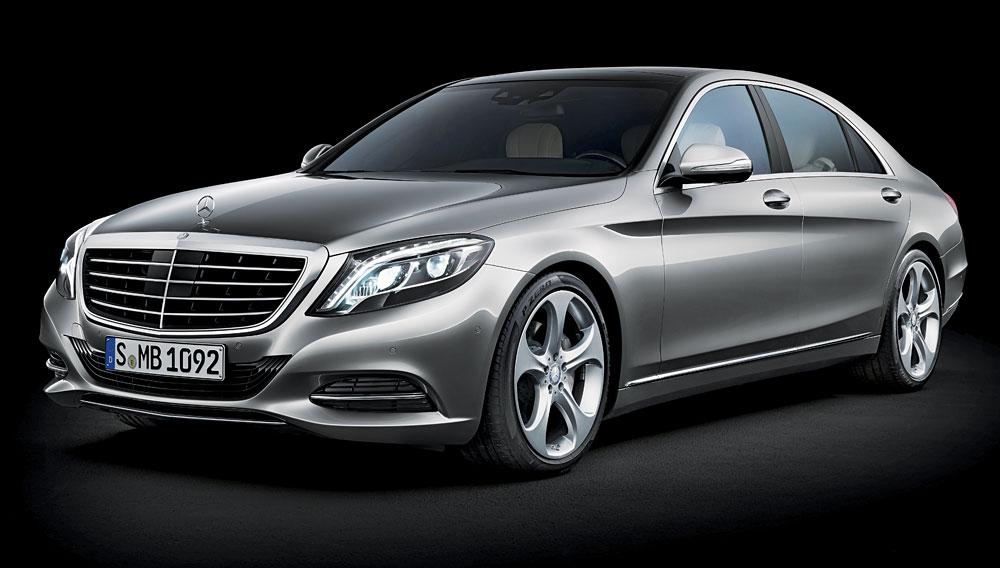 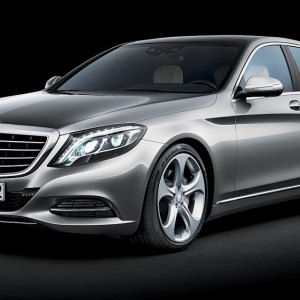 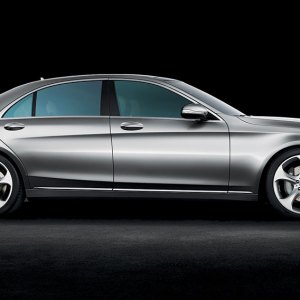 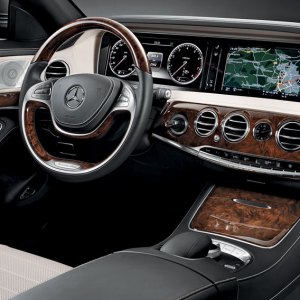 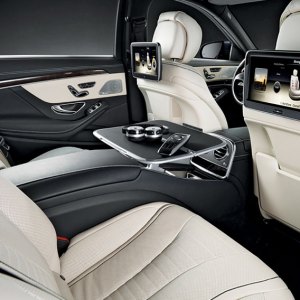 On this sparkling summer day at the Muskoka Airport, a general-aviation facility about 90 miles north of Toronto, a dummy wearing a wool sweater and a Halloween mask springs from behind a parked car on the runway and into the path of an oncoming sedan. The car’s Cross-Traffic Assist—without input from the driver—applies full braking force to avert a collision with the dummy.

On another section of the runway, drivers are instructed to pilot the sedan at 35 mph through a series of speed bumps that promise to have the car doing nosedives into the pavement. However, the car’s hyperbolically though aptly named Magic Body Control seems to liquefy the bumps, replacing the anticipated jolts with the sensation of driving through a puddle of molten Tarmac.

Inside the airport’s hangar a motorized mock-up of the sedan’s cabin whips around like a cup in the Mad Tea Party ride at Disneyland. Those who drove the sedan now take turns riding in the cabin so that they can experience the car’s Pre-Safe Plus, a collision-preparedness system that braces passengers for a crash or rollover.

Mercedes-Benz is staging this array of simulations and demonstrations to showcase some of the new gadgetry aboard the 2014 S550 sedan—the latest and sixth generation of the S-Class. These technologies and others compose what Mercedes-Benz calls Intelligent Drive. The company stops short of claiming that the S550 has a sentient brain, but as suggested by the term Intelligent Drive, the car can collect and evaluate information and respond accordingly. The S-Class—whose earlier generations were the debut production vehicles for air bags that worked in conjunction with motorized seat belts (in 1981) and Electronic Stability Control (in 1995)—is the first car to feature this level of autonomy.  ➤

The S550 arrived in U.S. showrooms in September. The car’s starting price had not yet been announced when Robb Report went to press, but it was expected to be around $95,000. In November, the S550 will be joined by the all-wheel-drive S550 4Matic and the high-performance S63 AMG 4Matic.A coupe and cabriolet are expected to follow.

The underpinnings for some of the Intelligent Drive features were available on the outgoing S-Class, but in the new model, the functionality and integration of the technologies have taken evolutionary jumps forward, thanks in part to the addition of optional cameras that survey the road ahead of the car. Positioned on either side of the rear-view mirror, the cameras scan the road for oncoming traffic, pedestrians, dummies dressed like Freddy Krueger, and other potential hazards so that it can command the brakes to engage before a collision. The cameras also seek out lesser irritations, such as poorly maintained roads, so that the air suspension can be informed in time to smooth things out. Radar sensors check blind spots for cars, bicycles, and other hidden objects, and also look behind the S550 to see whether any trailing cars pose a risk. In the European version of the S550, the Intelligent Drive system will attempt to prevent a rear-end collision by brightening the LED taillights to warn the approaching driver.

The car also sees in the dark, with infrared and thermal-imaging cameras that distinguish between animals and pedestrians. The latter are alerted with a targeted beam from the car’s LED headlights when the cameras perceive a potential impact. (The S550 is the first car to do away with all conventional lightbulbs. Even the cabin is equipped with LED lighting.)

Dieter Zetsche, chairman of Mercedes-Benz’s parent company, Daimler AG, and head of Mercedes-Benz cars, says Intelligent Drive is “paving the way to autonomous driving.” If driverless motoring is the ultimate goal for Mercedes-Benz, then it is not surprising that the S550 lavishes so much attention on passengers. The new cabin does not reach the decadently baroque heights of the Maybach, which Daimler discontinued at the end of 2012 after a 10-year productionrun that produced only about 3,000 sales worldwide. However, the S550’s interior does display an exceptional level of fit and finish, which has been largely absent from the S-Class since the 1990s. Zetsche promises that even with the car’s base trim, “Anything that looks like metal is metal; anything that looks like leather is leather.” (Spot-checking the map pockets and the roof-mounted passenger grab handles was rewarded with the feel of genuine hide, not vinyl or plastic.)

Depending on the buyer’s preference, the dashboard can be clad in wood, carbon fiber, or leather. It is punctuated at its center stack by a round analog clock flanked by chrome portholes for heat and air-conditioning. A distinct two-spoke steering wheel crowns the dash.

The optional Executive or First Class Rear package adds various amenities to cosset owners who intend to be chauffeured in the S550. The features include remote-controlled dual LCD video screens, fully articulating chrome-and-wood work trays for laptops or tablets, cup holders that keep drinks warm or cold, and seats that recline as much as 43.5 degrees and come with a feature that simulates a hot-stone massage. The rear seats also are the first in a Mercedes-Benz car to be equipped with inflatable seat belts, also known as Belt Bags. When the car’s sensors detect a collision, the seat belts instantly fill with air, like dashboard air bags. They are designed to lessen the strain that a standard seat belt places on a passenger’s rib cage during a collision.

The car’s “active perfuming system,” which atomizes fragrance into the cabin from its holster in the glove box, has a pleasant enough effect, but it is perhaps too much icing on the cake.

The streamlined shape of the S550 reduces drag to an astonishingly low level. Mercedes-Benz engineers note that the S550’s slippery shape also reduces fuel consumption (MPG ratings were not available at press time) and quiets wind buffeting. Indeed, the engineers claim that the S550 is the quietest car on the road, yet it does not rely on the noise-canceling technology found in other luxury vehicles.

In its presentation at Muskoka, Mercedes-Benz focused on how the S550 autonomously protects and luxuriously ensconces passengers, not on how it rewards drivers. Nearly every mile of the test-drive was spent on highways or sweeping two-lane roads, where the cruising was serene but the car’s sporting capabilities were left unexplored. A cloverleaf junction provided a brief opportunity to push the S550, and as the car’s speed increased and the highway on-ramp’s radius decreased, the S550 displayed minimal body roll and earnest grip.

Power from the S550’s 4.7-liter, twin-turbocharged V-8 is ample. The engine enables the car to accelerate from zero to 60 mph in 4.8 seconds on its way to an electronically limited 130 mph top speed. Flooring the accelerator results in a brief lull while the 7G-Tronic transmission picks the right gear and the V-8’s twin turbochargers spin their silky magic. Then the car races effortlessly toward the horizon at the rate of the driver’s choosing.

Because Mercedes-Benz is the best at building suspensions for big, heavy cars, the company earns the benefit of the doubt that the S550 can take to twisty roads with vigor. But even if it is not the swiftest car on every road, the new S-Class is likely the smartest.

The S550 Is Just the Start of the New S-Class

Daimler AG chairman Dieter Zetsche, who also serves as the head of Mercedes-Benz cars, was making his way across the parking lot of the Muskoka Airport alone, for once unaccompanied by his phalanx of assistants. Here was an opportunity to ask him some impromptu questions about upcoming iterations of the new S-Class and to inquire about the grand, new Mercedes-Benz sedan that will serve as a replacement of sorts for the discontinued Maybach.

Zetsche said that over the next 18 months, Mercedes-Benz will roll out four more S-Class variations, in addition to the all-wheel-drive S550 and S63 AMG. These include a coupe (the CL moniker is being retired), which was scheduled to debut in September at the motor show in Frankfurt, Germany, and a cabriolet (with two doors and a soft top), which, Zetsche said, would follow soon after. He stated that a four-door S-Class convertible, teased in 2007 with the introduction of the Concept Ocean Drive, will not go into production.

Zetsche said that when the company decided to discontinue the Maybach because its roughly $350,000 starting price prohibited a sufficient sales volume (about 3,000 cars sold in 10 years), Mercedes-Benz wanted to offer something with “Maybach-level options and comfort.” He confirmed that such a car is on the way and that it will be powered by a 12-cylinder engine, though he hinted that this car also could be offered with smaller, more efficient power plants. Relative to the S-Class on which it will be based, the car will be “significantly revised,” he said.

With that revelation, his handlers descended, politely ended the conversation, and ushered Zetsche to his next appointment. Separately, another Mercedes-Benz source said that two Maybach-like sedans are in the works, one longer than the other. The longer version will be called the Mercedes-Benz Pullman, and, like one of the variants built during the original Pullman’s 1963–1981 production run, it will be a six-door limousine. —J.R.