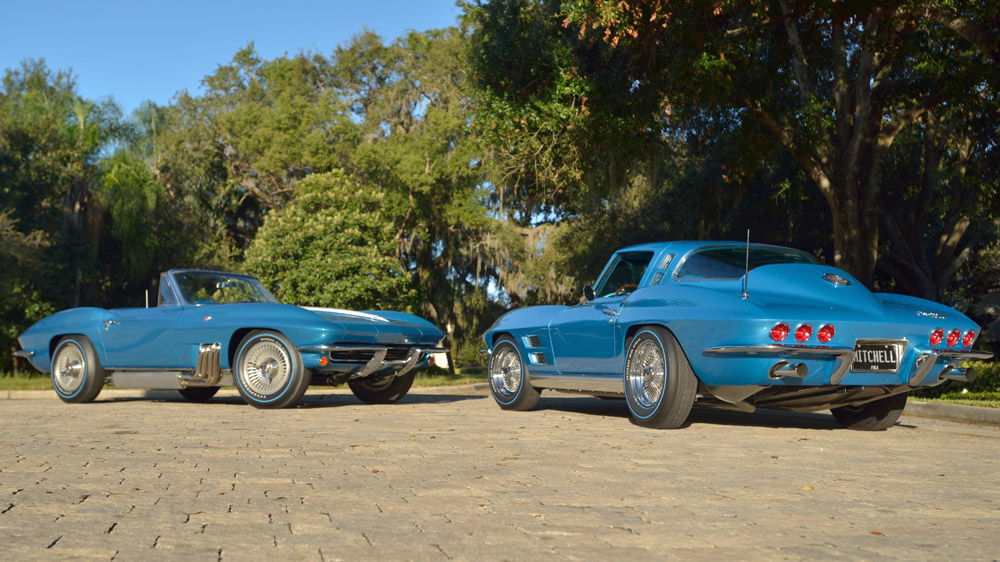 Over the course of almost 30 years, Mecum Auctions has grown to become one of the world’s leading collector-car auction companies. In that time, the Wisconsin-based auction house has carved out a reputation as a specialist in classic and contemporary muscle cars; and during its annual sale in Kissimmee, Fla., Mecum typically hammers down some of its highest-priced sales of the year.

In 2018, contemporary exotic sports and super cars accounted for six of Mecum’s top-10 Kissimmee sales (including its top-selling lot); however, this year’s docket features a number of premier examples of vintage American muscle.

The following vehicles, which roll across Mecum’s block on January 11 and 12, not only represent the power and ingenuity of American automotive design, they are also the first, last, or special one-off builds of iconic automobiles.

During the early 1960s, Henry Ford II, the CEO and chairman of his namesake automotive company, attempted to purchase Ferrari—an acquisition plan hoped to help Ford create its first sports car. When Enzo Ferrari complicated the deal beyond repair, Ford famously declared “If I can’t buy Ferrari, I’m going to beat Ferrari.” Between January 1964 and April 1965, Ford Advanced Vehicles—in an effort to prepare for (and win) the 24 Hours of Le Mans—built 12 GT prototypes. This 1965 Ford GT Competition Prototype Roadster is one of only five roadsters that were built during that production run; it’s also one of only two examples that have survived.

The car carries the distinction of being the only open-cockpit GT to compete in the famous French endurance race; however, a gearbox failure dropped the car from competition after only 11 laps. Nevertheless, this prototype—along with the 11 others—played a pivotal role in Ford’s evolution as a sports-car manufacturer, which led to the company’s four consecutive Le Mans victories from 1966 to 1969. In 2013, the car’s consignor, Dana Mecum, commissioned a three-year, concours-quality restoration of the car, which returned the vehicle to its original configuration and period-correct bodywork. The auction house projects the car to sell for more than $11 million.

After Ford redesigned the Mustang in 1967, Carroll Shelby introduced the GT500, which was powered by a modified Police Interceptor 428-cubic-inch engine that pumped out 355 hp. As a promotional event for Goodyear Thunderbolt economy tires, Shelby built a special, supercar iteration of the GT500, which was equipped with a special, lightweight 427 racing engine. That car, known as the Shelby GT500 Super Snake, initially sold for $5,000 in August 1967.

It has remained largely in original condition since then and recently underwent a light restoration where it was fit with a new set of Thunderbolt whitewall tires. According to Mecum Auctions, when the car crosses the block in Kissimmee, it could sell for as much as $1.2 million—a conservative estimate considering it last sold for $1.3 million during Mecum’s Indianapolis auction in 2013.

Unlike the previous two vehicles—cars deemed to be highly valuable in part because of their status as prototypes—this 1965 Shelby 289 Cobra CSX2588 is potentially just as desirable for being the last of its era. The car, which is the final 289 Cobra sold to the public, is also the second-to-last 289 Cobra built (the final example, CSX2589, has remained in the Shelby family since it rolled out of the factory).

It is also the final 289 Cobra built with a four-speed manual transmission. For all of those reasons—not to mention the fact that the car has retained its original chassis, body, engine, and drivetrain—this rare American muscle car could sell for as much as $1.4 million.

Chances are, if you were a kid during the 1960s and you loved cars, you remember this 1932 Ford Roadster. Built by the late Tom McMullen, who once wrote articles for Hot Rod magazine and later founded a publishing company that created Street Rodder magazine, the legendary roadster graced magazine covers, inspired record album artwork, and often appeared in television advertisements and various movies.

Up until the day that he sold the roadster in 1970, McMullen continuously modified and improved the car—actions that allowed him to set speed records at El Mirage and Bonneville. The car has since been restored to how it looked on the cover of Hot Rod magazine in April 1963. If the right rodding enthusiasts are in the audience at Kissimmee, this car, which last sold for $700,000 in 2012, could easily eclipse its $1 million high estimate.

Chevrolet unveiled the Corvette during the New York Auto Show in 1953 as part of its Motorama display. Although it was conceived as a show car, the fledgling model conjured up enough interest to convince GM to graduate the Corvette to production-car status. During the mid-1960s, the model underwent a gradual metamorphosis, which introduced the Sting Ray design. Two rare Sting Ray examples, built for and gifted to two of GM’s most influential automotive designers, will be offered for sale as a pair during Mecum’s auction. The 1963 convertible was gifted to Harley Earl, who innovated freehand sketching and clay modeling and also created GM’s Motorama dream cars (including the original Corvette).

Finished in metallic blue with a white stripe, the car features design elements that never made it into regular production, such as side-exit exhaust pipes that emerge through openings behind the front wheel wells and extend rearward within chromed channels. The second car—built for Earl’s successor, Bill Mitchell, who oversaw design of the 1963–1967 Corvette Sting Ray—is a 1964 coupe, also painted metallic blue. It features an engine compartment finished to show-car standards. Together, these two unique Corvettes are anticipated to sell for as much as $3 million—a plausible estimate considering the 1963 Earl Corvette last sold for $1.5 million through a Mecum auction in 2013.