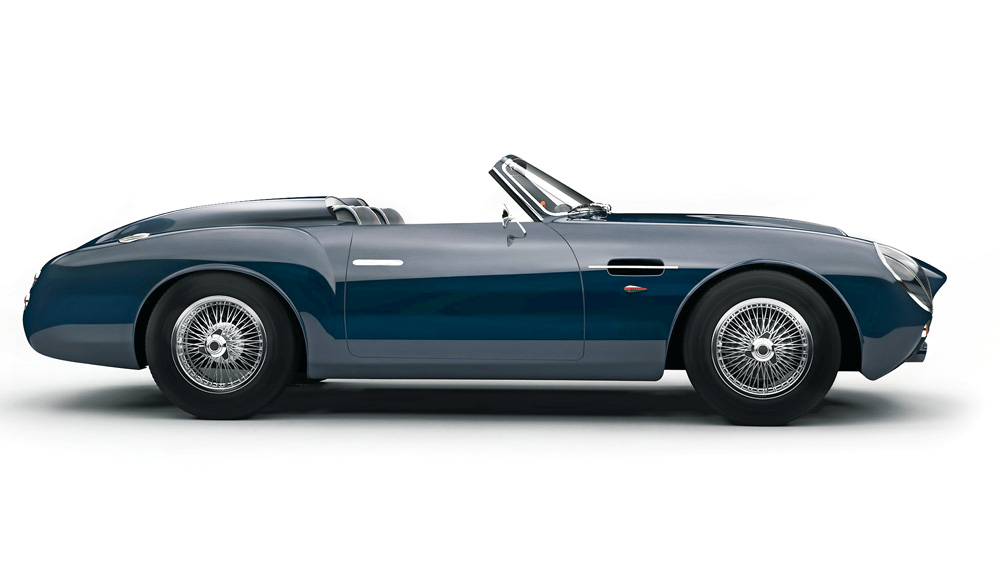 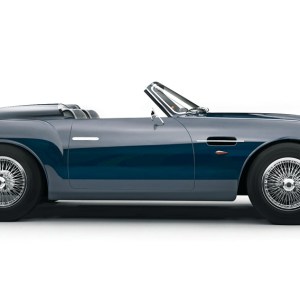 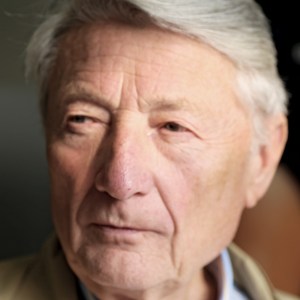 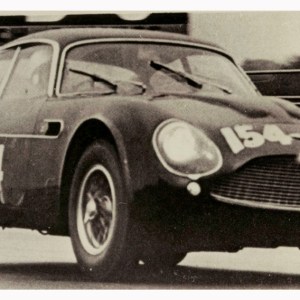 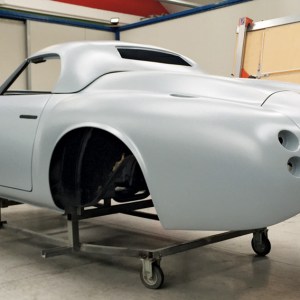 Ercole Spada joined the Milanese coachbuilder Zagato in February of 1960 and set about designing Aston Martin’s DB4GT Zagato coupe. The car was introduced in October of that year at the London Motor Show, and because of its beauty and rarity, it has become the marque’s most prized model.

At the same time that he was conceiving the coupe, Spada, who was 23 at the time, made a few pencil renderings of a DB4GT roadster—or more specifically, an open racecar known in Italy as a barchetta. Today, 55 years later, a car based on that design is being built under the direction of Jonathan Ward—and Spada himself. It is called the Icon Aston Martin DB4GTZ Spada Roadster.

Ward is the founder and lead designer of Icon, a Chatsworth, Calif., company that produces, among other vehicles, concours-quality road-warrior apparatus based on the Toyota FJ40 and Ford Bronco. Ward’s operation also attracts clients who commission unique rolling stock. To one such client, an Aston Martin fan, Ward proposed a convertible version of the DB4GT Zagato; and so began a project that would exceed all expectations.

The Zagato name is connected to some of the most beautiful automobiles ever created. Founded in 1919 by Ugo Zagato, the coachbuilder has used aerodynamic theory and lightweight aluminum construction to create exquisite designs and hand-built bodies for one-offs or limited-series production models for virtually every Italian sports-car maker. Indeed, some of the most collectible Alfa Romeos, Lancias, and Maseratis are clad in Zagato’s aluminum finery.

Aston Martin is not typically associated with Italian design, and yet the British marque’s DB4, DB5, and DB6 series of the late 1950s and ’60s were styled by Zagato’s Milan neighbor, Carrozzeria Touring. Aston Martin introduced the DB4GT in 1959. It was a modified version of the DB4 that featured a body by Touring, a shorter chassis, a lighter weight, and a more powerful engine. A year later, the British marque, intent on besting Ferrari’s 250 GT and other motorsports competitors, commissioned Zagato to build a more race-worthy version of the DB4GT. At Zagato, the task of designing the car went to Spada. The DB4GT he created was more aerodynamic and more sensuous than Touring’s upright design, and it was about 100 pounds lighter because of the extensive use of aluminum and the jettisoning of bumpers and other components deemed extraneous. Despite plans to produce 25 examples of the car, demand flagged, and only 19 were completed by the time production ceased in 1963. Four of the 19 were built with more aerodynamic bodies and to pure racing specification.

Over the entire series of DB4GT Zagatos, no two are exactly alike. Today these cars are unquestionably the most coveted Aston Martins; they are as significant and sought after as Ferrari 250 GTOs. Though they may not command the same prices as the Ferraris, their value, at more than $10 million, is commensurate with their beauty and rarity.

By 1970, Spada had left Zagato and become the chief designer at Ford’s Italian design house, Ghia. (Zagato allowed him to retain ownership of his drawings and designs for the cars that the coachbuilder never produced, including the DB4GT barchetta.) In 1976 he became the chief stylist for BMW, where he designed the 5 Series and 7 Series sedans that the company produced from the mid-1980s to the mid-’90s. In 1983, Spada assumed the top post at the I.DE.A Institute, an Italian design firm that created compact and luxury cars for Alfa Romeo, Fiat, Lancia, and a number of Japanese and Korean brands. He returned to Zagato in 1992 to work on the Ferrari FZ93 and subsequent designs.

While developing Icon’s design for a DB4GT roadster, Ward researched all the published plans for the Zagato coupe and used two examples of the car as references: one in England that he laser-scanned and another in Beverly Hills that belongs to the collector David Sydorick. Those resources and a healthy dose of what-ifs enabled Ward to make 3-D renderings and a one-twelfth-scale model of a roadster.

He had tried to locate published photographs of Spada’s original barchetta drawings and ultimately to locate Spada, but to no avail. Ward had heard that the designer was deceased, or that he was in a psychiatric hospital. Then another of his clients offhandedly mentioned that Spada had recently attended his daughter’s wedding. He was alive and well, residing outside Turin, Italy, and working with his son, Paolo, at SpadaConcept, an automotive and industrial design house that Paolo established a decade ago.

The client offered to share Ward’s design plans with Spada. When Spada, who turns 78 in July, learned of the project, he wanted in. And so began a collaboration that, says Ward, “let Ercole Spada set the record straight.”

“Spada’s eagerness to collaborate was just too absurd an opportunity to pass up,” he says. “We literally threw away everything we had done up until that day and started over again, working directly with Ercole and Paolo.”

Speaking on the phone from Italy with his son translating, Spada is gracious and charming as he describes how he had yearned to see his DB4GT barchetta plans come to fruition. He says that in the 1960s there was a pending commission from an Italian client to build one, but the car was never made.

In developing the design plans with Ward, Spada combined his preferred elements from each original DB4GT Zagato coupe—from the muscular rear fenders to the not-too-oval aluminum headlight surrounds. He focused on details that were overlooked during the construction of the original cars and of the contemporary replicas. “Now he gets angry. Now he gets excited,” says Paolo as he translates for his father. “Everybody makes these lights oval. In reality, it should be squared in the area inside the ring where the nose is. This gives a totally different look to the car. It’s a more aggressive expression compared to the fakes that are around.”

Ward and Spada have had to address numerous aesthetic and technical challenges throughout the design process, such as the inclusion of a removable hard top, which was not part of the 1960 plans but was added at the request of the Icon client.

At the outset of the project, a critical decision involved the roadster’s drivetrain: Should it be period correct, or should it comprise contemporary mechanicals? The original Zagato coupes were built on a DB4GT platform with a 4-speed transmission, Girling disc brakes, and then-state-of-the-art Borrani wire wheels. The engine was Aston Martin’s 3,670 cc DOHC aluminum inline-6 with twin plugs, triple Weber carburetors, and an output of 314 hp. Today, even the most carefully massaged Aston Martin from that era remains a relatively crude contraption, with performance that is modest and quirky by comparison to that of any 21st-century sports car. Therefore the roadster is being built on a unique chassis that was designed with help from Art Morrison Enterprises, a Washington-based company that specializes in producing custom chassis for classic cars. The engine is a powerful V-12 from a 2002 Aston Martin Vanquish. It is paired with a 6-speed Tremec transmission. The car will ride on a set of specially made Borrani wire wheels.

Ward expects to complete the Icon Aston Martin DB4GTZ Spada Roadster by the end of the year. Craftsmen in Turin are hammering the body panels by hand, using techniques similar to those employed by the Zagato body men who produced the DB4GT coupes.

“Working with my father and Jonathan, sharing old and new, classic and futuristic—for me this was a really great occasion,” says Paolo Spada. “We had to work all three together. We had to pool our thoughts. The modern aspects like 3-D modeling, then the hammering like in 1960—it was like listening to Beethoven with an iPod.”

When Paolo is asked to query his father about which car has brought him the most satisfaction, the two exchange many words in Italian. It is a question that a designer—or any artist—loathes.

“Normally, he doesn’t answer this question, because every car is different,” says Paolo. “But this evening, I think he’s in a good mood. From the racing point of view, surely the Alfa Romeo TZ2, which is the perfect combination of design and functionality. They had a lot of good results with the car. From the economical point of view, the BMW E32 7 Series. This car changed the history of BMW, because it was very modern and brought a very big economical result for BMW. And of course, the Aston Martin DB4GT Zagato, because it’s a milestone, too.”