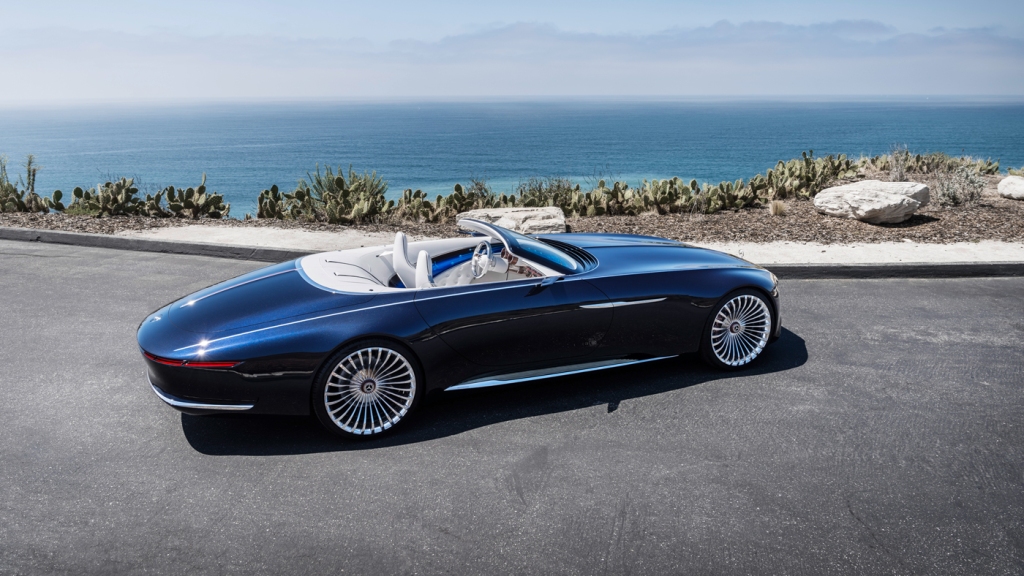 Standing out in a sea of priceless classics is a challenge for any conveyance, let alone one intended to live in the future. Mercedes-Benz stepped up to the task at the 2017 Pebble Beach Concours d’Elegance with the Vision Mercedes-Maybach 6 Cabriolet, a nearly 20-foot-long expression of unabashed opulence.

Powered by four electric motors producing 750 hp, this expansive two-door is capable of whisking to 60 mph in under 4 seconds and driving over 200 miles before requiring a recharge. But more striking than its athleticism is this two-seater’s seemingly impossible physical proportions.

Based on a coupé concept that debuted at Pebble Beach last year, this open-air one-off uses a removable fabric top composed of interwoven rose-gold threads, providing cover for inclement weather. The exterior is dominated by minimalist lines and simple curves. The front end echoes the grilles of current-model-year Mercedes-Maybachs, while the rear is a boat-tail design reminiscent of vehicles like the 1929 Mercedes-Benz S Barker Tourer (which happened to win this year’s Best of Show award).

The interior glows an effusive cool blue at night, augmented by a rush of light through the center tunnel that represents torque transfer when the accelerator is pressed. Seating surfaces are upholstered in pristine white nappa leather that extends over the central tunnel. Using a technique borrowed from Chesterfield furniture, the leather is folded in diamond shapes and secured to the frame using buttons incorporating backlit triple-pointed stars at each point.

The illuminated cabin is grounded with a yachting-inspired floor constructed of open-pore wood and inlaid aluminum. Surrounding the occupants is a continuous trim that integrates all display elements and touch-sensitive controls. The overarching theme of flushness is countered by what Mercedes designers call “hyperanalogue” elements like twin gauges with real needles.

Competing for attention during Monterey Car Week, the rakish Vision Mercedes-Maybach 6 Cabriolet concept offered an elegant and inspirational reverie for the future, one whose design language will hopefully bleed into successive generations of Mercedes-Benz models.